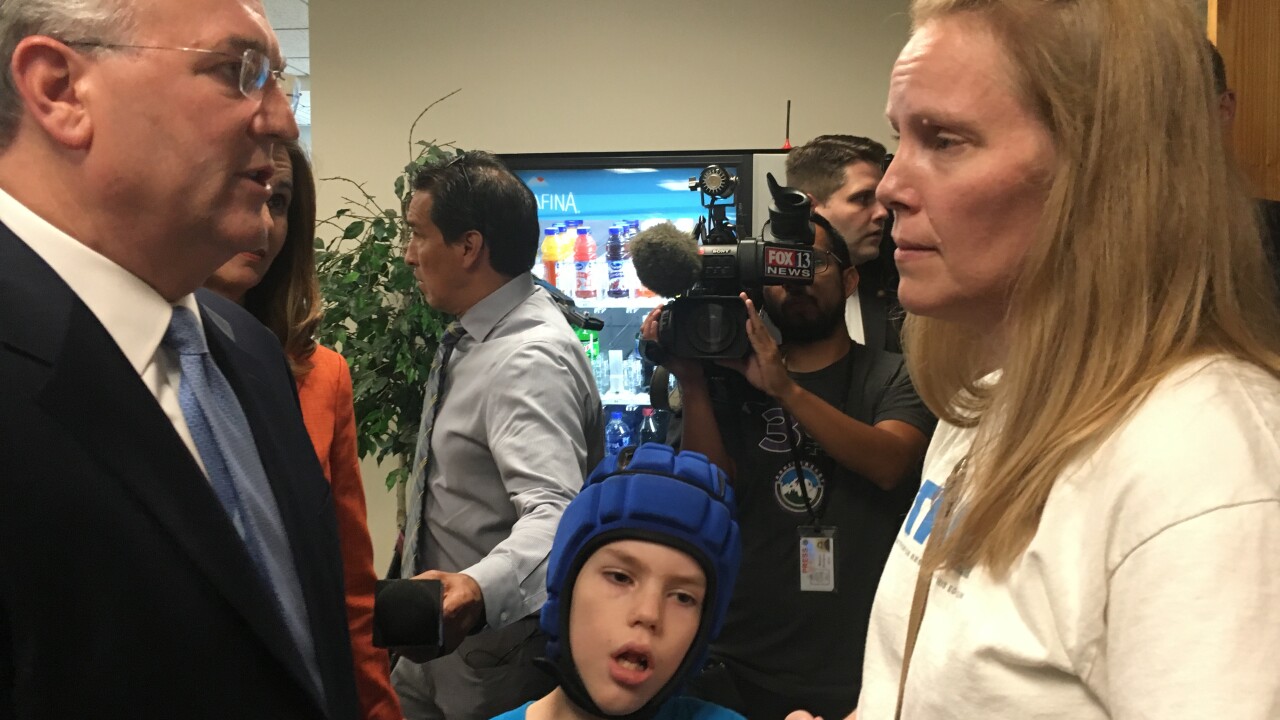 A woman confronts Elder Jack Gerard of the LDS Church’s Quorum of the Seventy outside a news conference opposing Proposition 2. (Photo by Ben Winslow, FOX 13 News)

At a news conference Thursday, Drug Safe Utah appeared with other opponents to urge people to vote against the popular ballot initiative.

"We believe Proposition 2 will be very bad for Utah," said Kem Gardner, a wealthy developer.

Some argued it would lead to recreational cannabis being legalized in Utah. Others said that while they have no problem with medical marijuana, they oppose the particular language of this initiative.

"We also urge lawmakers, patients, and community stakeholders to work together to find a solution that works for all Utahns," said Michelle McOmber of Drug Safe Utah.

The coalition organizing to oppose Prop. 2 includes the Utah Medical Association, the Salt Lake Chamber, the Utah PTA, the Fraternal Order of Police, the Utah Eagle Forum, the Islamic Society of Greater Salt Lake, the Utah Episcopal Diocese, and The Church of Jesus Christ of Latter-day Saints.

"We urge the voters of Utah to vote no on Proposition 2," said Elder Jack Gerard of the LDS Church's Quorum of the Seventy.

The LDS Church announced it did not oppose medical cannabis itself, so long as it is prescribed by a licensed physician and dispensed through a licensed pharmacy. (However, physicians cannot prescribe marijuana, they can only write a recommendation for it.)

Speaking to reporters afterward, Elder Gerard did not directly answer a question about how the Church has handled medical marijuana in the 30 other states where it is legal and the faith has members.

"The Church does not object to medicinal use of marijuana. But it’s also clear, we do believe Proposition 2 goes too far," he said.

Asked about a lawsuit seeking to block Prop. 2 from the November ballot claiming medical marijuana would infringe on LDS beliefs, Elder Gerard said: "the Church is not part of that lawsuit."

FOX 13 first reported on Wednesday the LDS Church would join the anti-Prop. 2 campaign, a major player in Utah's cultural and political landscape. They were joined by the Islamic Society of Greater Salt Lake and the Episcopal Diocese of Utah.

"I really don’t want people arrested or having to go out of state to get it, what’s needed for their health and well being," said Bishop Scott Hayashi of the Episcopal Diocese. "At the same time, there are things in the proposition with which I have difficulty."

Medical marijuana supporters were initially refused entry into the news conference, but ultimately allowed in to watch the event. They saw some of their friends who fought alongside them for medical cannabis at the Utah State Legislature now speaking against Prop. 2.

As he spoke, some Prop. 2 supports in the room turned their backs on him.

After the Thursday event, a woman rushed up to Elder Gerard with her son in tow. She told him she was an active LDS Church member, the mother of a child with seizures, and a supporter of Prop. 2.

"Let's work together," he told her.

At the news conference, Prop. 2 opponents hinted at the possibility of compromise legislation. FOX 13 reported earlier this week Drug Safe Utah met with Governor Gary Herbert in hopes of getting him to call a special session of the legislature to pre-empt the ballot initiative. He refused.

A woman confronts Elder Jack Gerard of the LDS Church's Quorum of the Seventy outside a news conference opposing Proposition 2. (Photo by Ben Winslow, FOX 13 News)

DJ Schanz of the Utah Patients Coalition, which is sponsoring Prop. 2, told FOX 13 he still believed it would pass, despite the opposition.

"The church is a large stakeholder in this state, but we didn’t write this for the church. We wrote it for the patients. We’re looking forward to making that message clear come November," he said.

"I have ten weeks until I can medicate him anyway," she cried, motioning to her son, Hestevan, in a wheelchair. "Don’t take that from me and claim that you’re doing something kind. It’s not kind. We’re tired of fighting power and money with patients who can’t even get out the door on their own. It’s not a fair fight!"