UPDATE: Sgt. Melody Gray with the Unified Police Department said that Ricky Marrott was located Monday afternoon by the Utah Highway Patrol near I-15 and 2100 S.

Additional details regarding how Ricky was located were not available at the time of this report.

Salt Lake Counyt Sheriff Rosie Rivera said that police have exhausted "all possible leads," and are asking for the public's help in locating Marrott. There was no evidence that Marrott was taken against his will.

In the surveillance photos, Marrott appears to be wearing a light gray and black colored jacket, jeans and sneakers. He also appears to have a backpack and a scooter with him: 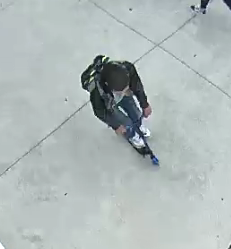 Police said it was unknown if Marrott was a runaway. None of his friends had any knowledge on his disappearance, though, Rivera said.

Police ask anyone who sees the boy or who has knowledge of his whereabouts to contact them. Dispatch can be reached at 801-743-7000.