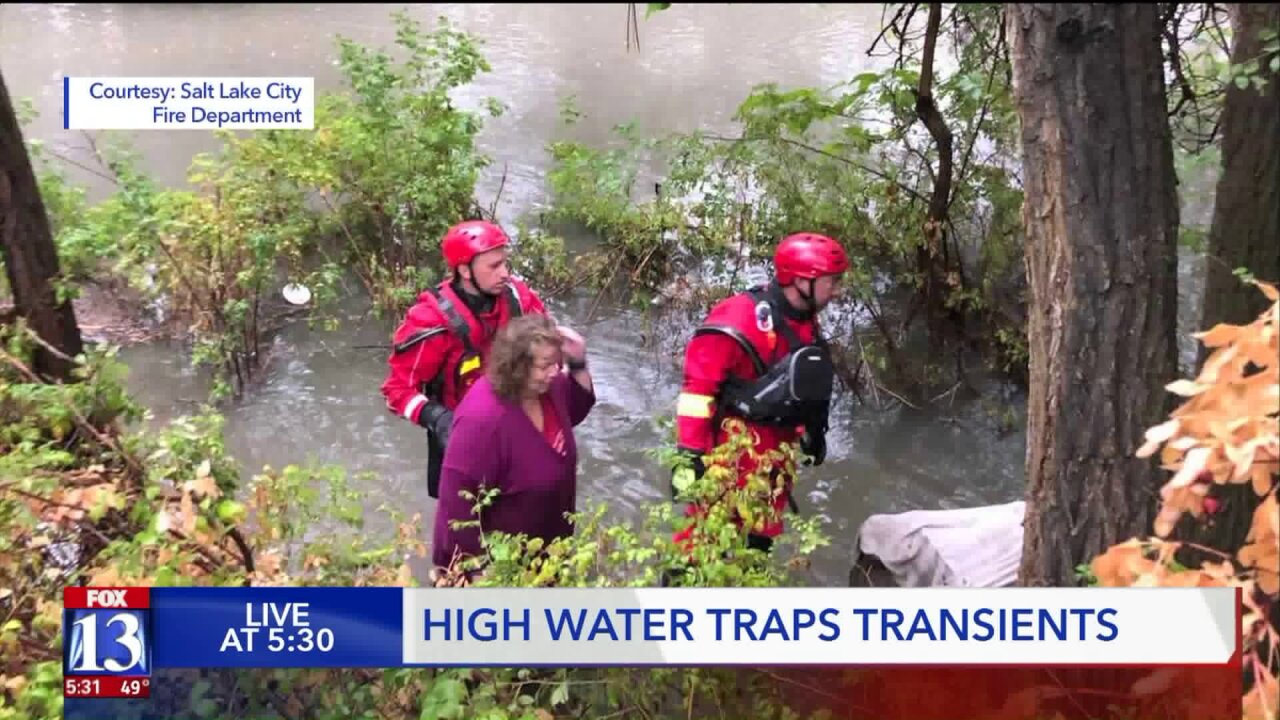 SALT LAKE CITY – Fire officials urge caution to the public after heavy rainfall traps transients overnight in flood water on the banks of the Jordan River.

“Where these folks were camping, not prepared for cold weather, because it hasn’t been terribly cold right? And then the overnight rain with the sudden water rise."

It was the perfect storm for a bad situation.

At a glance, catchment areas surround the Jordan River.

“It’s got several feet of water in it where it doesn’t normally,” said Marlowe, referencing photos he took of flooding along the banks of the Jordan.

A catchment area serves as a collection site for rainfall and overflow from the river, but two transients who were illegally camping on the banks didn’t know that.

“These folks were in an area that previously hadn’t really been inhabited, kind of a new area for us… kind of caught us off guard, as well as them,” Marlowe said.

The duo had set up camp in the middle of one of those catchment areas.

“They spent the evening in water that was three to four feet deep,” Marlowe said.

As the rain fell, the water levels went up and they inched back.

The two had backed themselves into an area filled with reeds and overgrowth.

“When you combine that with their physical inability to walk they just were stuck,” said Marlowe, referring to preexisting physical limitations which prevented them from getting out of the water.

Their situation left the duo to spend the night in cold, waist deep water.

“These folks were actually pretty lucky. They were able to keep their upper torsos up out of the water,” said Marlowe. “But their body core temperatures were still very, very low.”

Passerby heard the duo yelling for help Wednesday morning and alerted the fire department. A first responder rescue team was able to get in and get them out, before the situation got worse.

“No life threatening injuries, but they were both very hypothermic and both transported to a local hospital,” Marlowe said.

And while this time everyone came away scot-free, the fire department said this an issue they see year after year.

“We continually do bank sweeps in areas where transients like to camp out,” Marlowe said. “We do our very best to displace them and move them into an appropriate shelter facility."

However, Marlowe said, transients don't always want to stay in shelters and often return to camping outside.

The fire departments asks that anyone who sees a transient camp reports it, to help them keep things under control.

“If we’re at least aware of locations then we have an idea of where to start looking to help the people,” Marlowe said.

While this issue is common among transients, the fire department said this can happen to anyone.

“Just be cautious along the banks,” Marlowe said. “The water’s much higher than usual and much faster than usual, if you were to go into the water today it would be quite difficult to get out."

He also urged those with children and pets to take extra precautions.