SALT LAKE CITY —Republicans in Utah’s biggest political races are bringing in more money than their competitors, and much of the money is coming from big donors outside of Utah.

That discrepancy comes largely from money pouring in from outside of Utah, according to a Fox 13 News analysis of raw data from the FEC .

During that same time period McAdams got 1,465 contributions from inside of Utah, while Love got 238.

The discrepancy is typical of congressional races nationwide, as incumbents draw easy support from corporate and activist interests and political action committees.

Editor’s note: The video previously included with this story contained a graphic showing incorrect contribution dollar amounts for the Fourth Congressional District race. The graphics meant for the story are included below: 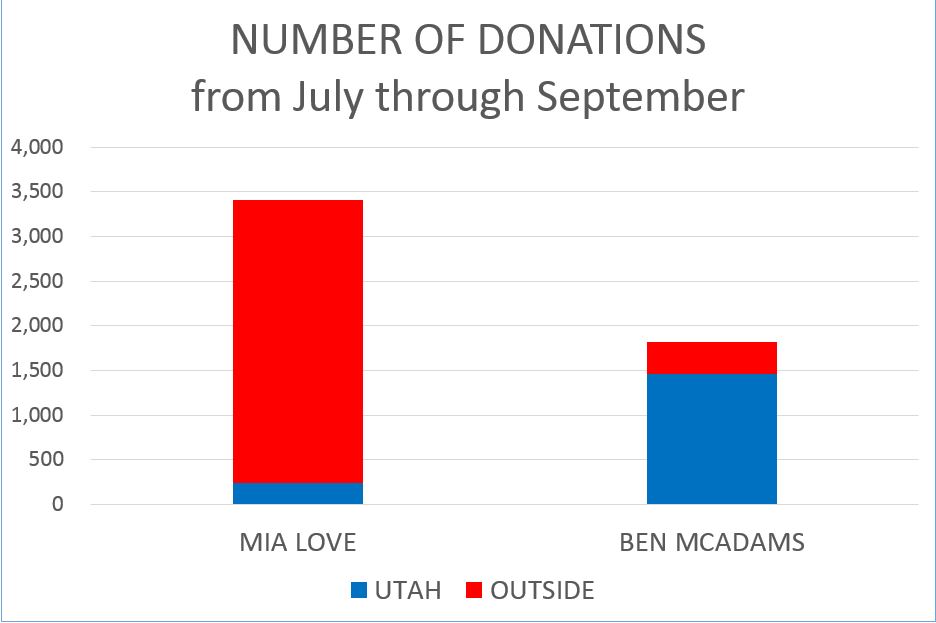 But in Utah’s U.S. Senate race, Mitt Romney’s name recognition and national resume has drawn dollars like an incumbent even though the seat has been left open by Orrin Hatch’s decision to retire.

Through June, Romney had raised $3.1 million to Wilson’s haul of $1 million.

More than 80 percent of Romney’s money came from contributions of $2,000 or more, while Wilson got about 64 percent of her money from donations under $2,000.

Through June, Romney received nearly as much money from his old home state of Massachusetts as he did from Utah. Massachusetts residents gave him about $472,000 compared with $583,000 from Utahns.

Jenny Wilson’s second highest contributing state was California, but it was a very distant second. Compare the $60,000 Wilson got from Californians to the $682,000 she got from Utahns. See charts comparing Romney’s and Wilson’s contributions side-by-side.