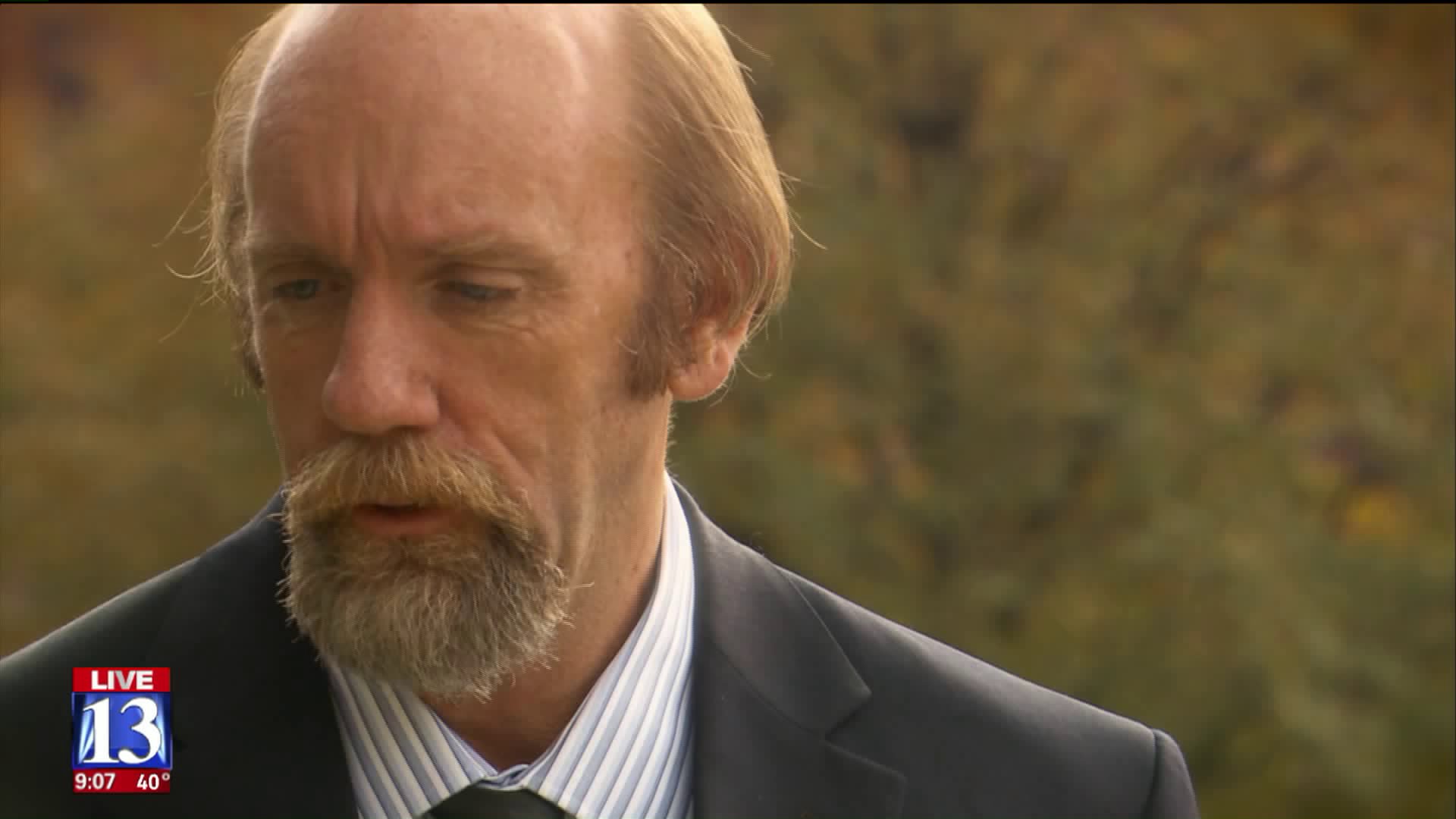 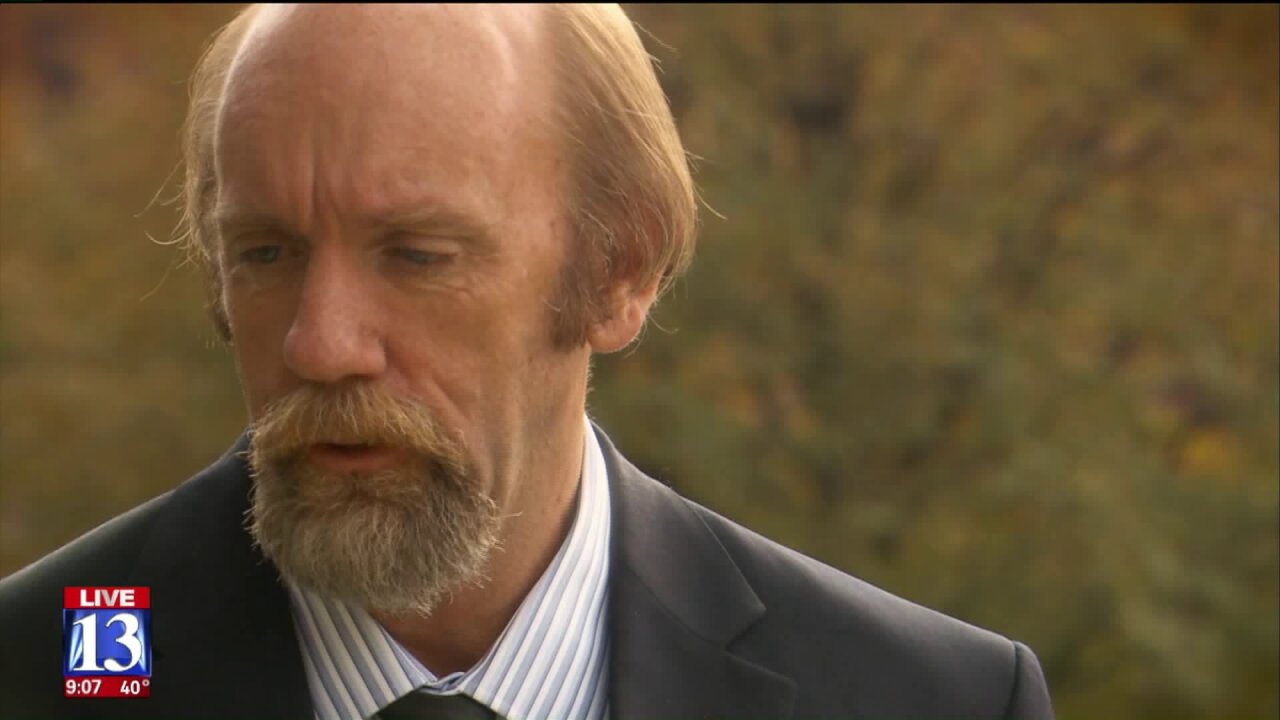 “People think I just walked in and lost it,” said Payne.

However, to really understand it, we need to start with dash cam video of a fiery crash in Cache County. A man running from Logan police hit a semi-truck driven head-on. The suspect died on scene and the truck driver, Bill Gray was rushed to the University of Utah Hospital. Logan Police asked Payne, one of Salt Lake City Police Department’s few phlebotomists, to collect Gray's blood.

“They wanted blood from this person just to verify that he was not impaired in any way,” said Payne.

When Payne arrived at the hospital he spoke with the nurse in charge, Alex Wubbels and told her what he was there to do.

“She was telling me that she wasn't sure if I could or not. She would have to check with her superiors,” said Payne.

“If I couldn't get the blood draw at that point, he was going to order me to arrest her for interfering with a criminal investigation. I sat in the waiting room for about an hour and a half with no word from anyone,” said Payne.

When nurse Wubbels came back and said he couldn't draw the blood, Payne says he got up to leave.

“As I was walking towards the elevator, nurse Wubbels was behind me and she asked for my business card,” said Payne.

He didn't have a card on him, but said she could come with him to his patrol car to get one. In the elevator, he called Lt. Tracy and handed her the phone.

“She spoke for several minutes to Lt. Tracy,” said Payne.

Citing implied consent and exigent circumstances, Lt. Tracy told nurse Wubbels that if she prevented detective Payne from withdrawing blood, he would order him to arrest her.

“She says she's just doing what her bosses tell her to do and I acknowledged that and said that's what I'm doing,” said Payne.

Payne said at one point, nurse Wubbels asked a University of Utah police officer, who was standing nearby, to step in, but he told her he couldn’t get involved.

“She also got security to show up and when she asked them for help she was told that it's a police matter and they cannot get involved,” said Payne.

After more than two hours going back and forth, Payne decided to go forward with the arrest.

“The decision was made to arrest her. I had to do something and unfortunately, a lot of people didn't like what I did,” he said.

Payne said when he went in to make the arrest, Wubbels resisted.

“When I reached out to take her wrist and she pulled back, whether people want to admit it or not, that's being physical. She at that point is physically resisting,” said Payne.

“You use force one step higher than the person you are arresting, so if they’re compliant and put their hands behind their back, you put handcuffs on them and you go. If they pull a knife, you got to go one step higher. She kept struggling with me so that I had to use that little bit of force to get her out the door so that I could get this situation under control,” said Payne.

When Lt. Tracy arrived on the scene, he decided to release nurse Wubbels and screen charges later.

The next day, Payne was told internal affairs was investigating the incident.

“I felt that I had done everything within the law and within policy,” said Payne.

Before the internal investigation was complete, nurse Wubbels' lawyer, Karra Porter, released the body camera footage to the media.

“Everybody who hates cops had something negative to say,” said Payne.

When the video gained international attention, Payne was put on administrative leave. A month later he was fired.

“He did everything he could to make me look horrible enough to justify the termination,” said Payne.

“The social media went wild, and those are people who have the chance to vote for the mayor or vote against her so she's going to do what she needs to do to get votes. I was the sacrificial lamb,” said Payne.

Nurse Wubbels got a half-million-dollar settlement. Payne's watch commander, Lt. Tracy, was demoted but is still employed and the police department's policy regarding blood draws on unconscious patients was changed a few weeks after the incident.

“I thought it was very ironic that I was following a policy that was in effect. They didn’t like it, so two weeks after the incident, they changed the policy and still fire me,” said Payne.

"What do you think the proper form of discipline would’ve been?” asked Fox13’s Dora Scheidell.

“I think terminating me was extremely excessive. They were not happy. They said it was an embarrassment, you know, what I did. Okay. If I don`t know the proper way to handle that situation, then that`s a training issue,” said Payne.

Even though Payne was the senior phlebotomist, he said the department never trained him on the laws regarding blood draws.

“I felt that I knew everything that the department had given us, and I even did a lot of the training to other phlebotomists,” said Payne.

“In the arrest, there was a large degree of physicality. What is your reason, why did you think that level of physicality was necessary to make that arrest?” asked Scheidell.

“You say a large degree. I got ahold of her and I escorted her outside. To me, I'm going above what her resistance was, just enough to get it done,” said Payne.

Payne said when nurse Wubbels resisted the arrest, he followed his training by taking his level of force one level above hers.

“Do you feel in retrospect, that arrest was necessary?” asked Scheidell.

“Absolutely necessary, no, but still she was doing what I believe, was interfering,” said Payne.

Payne says he only recently watched the body camera footage.

“When you look at the video, you don't see anything wrong with it?” asked Scheidell.

“Not that wrong. Could’ve been done different, yeah but was it wrong? No, but a lot of people will disagree with me,” said Payne.

He's suing for wrongful termination and asking for $1.5 million in damages, but mostly, the veteran of 27 years wants his job back.

“I’m working at a job that pays a little above minimum wage and still trying to keep my household together. My life is destroyed because of this and I don't know how many years it’s going to take to have some sort of peace,” said Payne.

Despite the damage, Payne says he has no hard feelings towards the nurse who held her ground and changed the course of his life.

“I don't hold any animosity towards her. She was doing her job. I was doing my job. Unfortunately, it conflicted and I'm the one that bears most of the burden from it,” said Payne.

“Although Lt. Tracy did tell him that, Lt. Tracy was not provided with all the information that Jeff had,” said Shearer.

Sgt. Shearer is referring to a detail outlined in Chief Mike Brown's decision to terminate. After the arrest, Payne told Lt. Tracy he had spoken to the Logan Police Department twice and they weren't upset by his inability to obtain the blood sample.

“The Logan police department had said to you, if you can’t get the blood it's okay. Why didn't you communicate that to Lt. Tracy?” asked Scheidell.

“I called Lt. Tracy, handed the phone to her, and the dynamics of the incident changed. At that point, I wasn't thinking about the phone call to Logan. It was a very casual, nonchalant phone call that at that point, it wasn`t even on my mind,” said Payne.

Payne also mentioned several times, as the department's senior phlebotomist, he was never trained on the laws regarding blood draws.

“When we specialize in certain areas sometimes it’s incumbent upon us to understand the laws for which we are required to enforce,” said Shearer.

As for Payne’s claim that Chief Brown succumbed to public pressure, Shearer says there’s no truth to it.

“I think he was under orders to get rid of me,” said Payne.

Payne is still in the process of appealing his termination with the civil service commission and moving forward with his wrongful termination suit.

We also reached out to nurse Wubbels and her attorney, but haven't heard back from them yet.