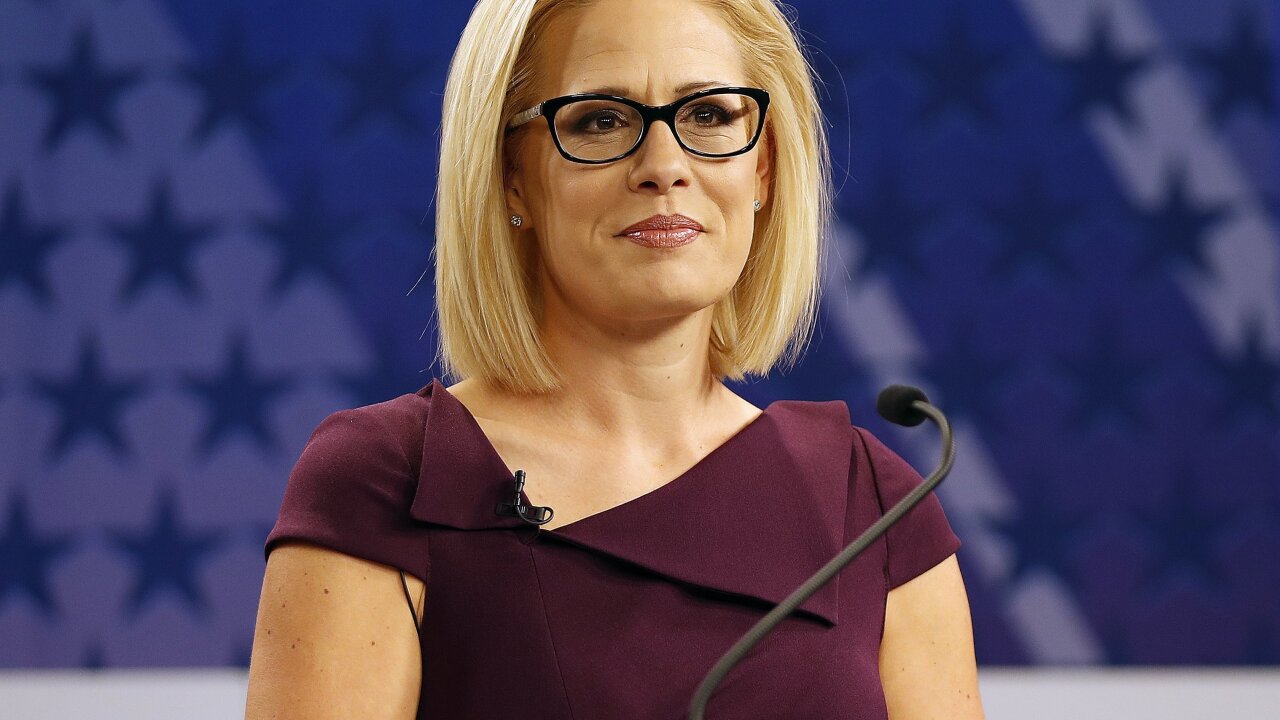 Democratic Rep. Kyrsten Sinema will win Arizona’s US Senate race, defeating Republican Rep. Martha McSally and flipping a seat that had been in GOP hands for 24 years.

(CNN) — Democratic Rep. Kyrsten Sinema will win Arizona’s US Senate race, defeating Republican Rep. Martha McSally and flipping a seat that had been in GOP hands for 24 years.

“I just called Kyrsten Sinema and congratulated her on becoming Arizona’s first female senator after a hard-fought battle. I wish her all success as she represents Arizona in the Senate,” McSally said in a video posted on Twitter Monday night.

The win comes despite President Donald Trump and Republicans pushing false conspiracy theories about why ballots in Arizona were taking so long to count.

Trump tweeted Friday that “electoral corruption” was taking place and suggested Arizona should have a new election. The National Republican Senatorial Committee, in an email to reporters, accused the Maricopa County recorder of trying to “cook the books” for Sinema.

The reality is about three-fourths of Arizona’s ballots are cast by mail. Because of a state law requiring ballots to be sealed and signed, and signatures to match those on voter registration forms, it routinely takes the state longer than most to tally its results.

Sinema’s victory showed that Democrats are continuing to gain momentum in the rapidly diversifying Sun Belt and firmly places Arizona among the most important presidential and Senate battlegrounds.

The race was certain to deliver Arizona its first female senator. And it came at a time of major change in the state’s delegation.

Trump long sought to recruit a Republican to run in the primary against Sen. Jeff Flake, a critic of the President’s incendiary rhetoric. At a 2017 rally in Phoenix, Trump huddled backstage with then-state Treasurer Jeff DeWit, former state GOP Chairman Robert Graham and then-Rep. Trent Franks to discuss a potential primary.

Rather than face an all-but-certain loss to a Trump-aligned candidate in a primary, Flake retired, opening up the seat on this year’s ballot.

Then, in August, longtime GOP Sen. John McCain died. Republican Gov. Doug Ducey appointed Republican former Sen. Jon Kyl to the seat, but Kyl has committed to filling it only through this year — leaving the possibility that Ducey could have to select another new senator in the coming weeks or months. Either way, McCain’s seat is on the ballot in 2020 and is sure to be a top Democratic target.

The upheaval comes as Arizona, long a Republican bastion, emerges as a swing state in presidential elections. Hillary Clinton lost to Trump by just 4 percentage points there. The result, and the state’s growing Latino population, solidified Arizona as a battleground moving forward.

The fight between McSally and Sinema was bitter, with both drastically shifting their previous positions.

Sinema’s House record ranks her among the most centrist Democrats — but McSally seized on her rival’s past as an anti-war activist, airing a television advertisement featuring Sinema protesting in a pink tutu. McSally told The Arizona Republic that Sinema “has a lot of explaining to do if you look at her Green Party-pink tutu, proud Prada socialist past and her extreme makeover.”

Latino Democratic strategists, meanwhile, groused that Sinema had moved too far right on immigration to appeal to a crucial, growing portion of the Democratic electorate.

McSally responded with advertisements claiming to be “leading the fight” to ensure those people are protected — even though, under Obamacare, they already are, and the fight in Congress was over Republicans’ efforts to change those protections.