‘Cookie,’ the puppy stolen from the Humane Society gets a real home and a new name

SALT LAKE CITY — “Cookie,” a Cairn Terrior stolen from the Humane Society of Utah has been adopted out to a family and her named is now, “Lucy.”

The two-month-old puppy was stolen from the Humane Society on November 29.

Surveillance photos appeared to show a woman putting the dog in a bag and taking it out of the facility.

The next day, a man and a woman driving near Meridian, Idaho were stopped on suspicion of DUI.

The driver of the car, 43-year-old Jennifer Lyon, was arrested for DUI but she did not match the description of the woman who took the puppy.

Animal control officers took the puppy and a microchip indicated she was from the Utah shelter.

She was returned and has since been adopted out to Pete Philbrook and his family in Salt Lake City, where she joins another Cairn Terrior named, “Abby.”

Philbrook is an employee of Mark Miller Subaru and the company paid for the adoption fees.

Here are some pictures of Lucy in her new home: 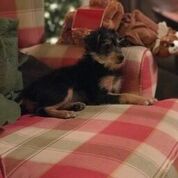