"I had struggles last year but was able to figure it out this year and I'm thinking I'm good now," Mitchell said.

"That was pretty special, especially for Blaise and Rory wanting to be in the sports industry and sports writing world," Mitchell said. "It was kind of like huge."

Rory posted on Instagram the news was a "needed positive disruption."

Blaise also took to social media, sharing that his older brother and Mitchell used to play basketball together and that he went to every game.

"It's almost surreal that I now have the honor of being the first one to introduce and interview Donovan Mitchell," he said.

Still working out all the details on his new shoes, Mitchell said he wants these shoes to be worn by the average person, not just those who can afford them.

"That's not me," Mitchell said. "I can tell you that right now, that's not what I'm about. Obviously with my message being for kids, I want the kinds to be able to have these shoes."

You can read all about Donovan's new shoe on the Adidas website. 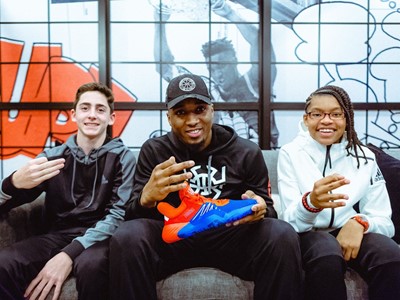