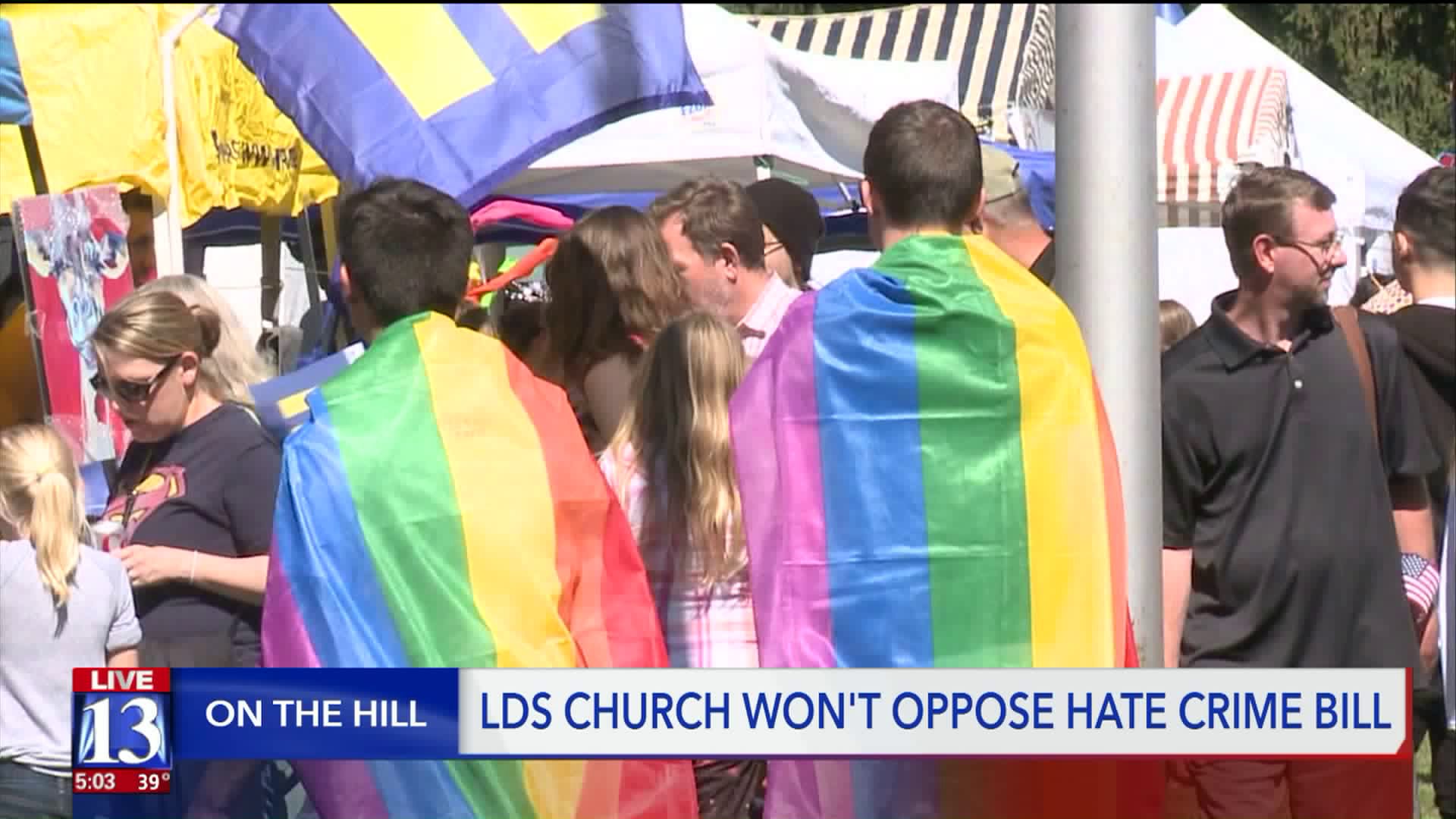 SALT LAKE CITY -- The Church of Jesus Christ of Latter-day Saints said it will not oppose a bill that would expand Utah's hate crimes law to include protections for LGBTQ people.

"The Church of Jesus Christ of Latter-day Saints has been the recipients of hate crimes over the years. We understand that," Marty Stephens, the Church's Director of Government and Community Relations, said in an interview Thursday with FOX 13. "We believe all our sons and daughters of God should be protected and no group should be targeted for hate based on their beliefs."

The LDS Church has faced accusations it hindered any hate crime legislation when in 2016 it called for a moratorium on similar legislation after a landmark non-discrimination bill was passed that provided protections for LGBTQ people in housing and employment. Then-Sen. Steve Urquhart accused the Church of "snuffing out" his bill.

"We simply chose to make no comment which is what we do on most pieces of legislation. It’s gotten over the last year or two and it started to focus again on us this year that we were the ones causing the bill not to pass," Stephens said Thursday. "So that’s the reason we wanted to make a statement."

On Capitol Hill, a hate crimes bill enhancing penalties has largely stalled over protections for LGBTQ people. Sen. Daniel Thatcher, R-West Valley City, is proposing to add an enhancement to crimes based on targeting someone for race, religion, disability, gender, sexual orientation and gender identity. He said the bill was modeled after legislation crafted by the Anti-Defamation League.

"We would not propose that anyone be excluded," Stephens said of the protected categories list.

Sen. Thatcher said he was glad to hear comments from the Church as he prepared to run the bill for another year.

"I am very, very grateful that they are finally on the record," he said.

Sen. Thatcher still anticipated he would have to work to get the bill passed in the Utah State Legislature. But he said he has assured skeptical colleagues that the bill does not target thought.

"This bill has nothing to do with speech or opinions, thoughts or feelings. This isn’t about hurting someone’s feelings or offending somebody. This is about criminal actions," he said.

A racially-motivated attack on a man at a Salt Lake City tire shop last year has spurred new demands for a hate crimes law.

Speaking to reporters on Thursday, Governor Gary Herbert also indicated some support for the bill. At his monthly news conference on KUED, the governor said the LDS Church's statement "can't hurt" when it comes to odds of passage.

The LGBTQ rights group Equality Utah told FOX 13 it was hopeful the bill would pass.

"Many Utah faith communities have already come out in support of inclusive hate crimes legislation," said Equality Utah Executive Director Troy Williams. "So with the news that the Latter-day Saints now won’t oppose, we remain hopeful and optimistic."

The Anti-Defamation League also called on the legislature to pass the bill.

"We are so grateful for the warm welcome and friendship that The Church of Jesus Christ of Latter-day Saints has extended to the ADL and to the Jewish community. Comprehensive hate crimes legislation is imperative to the safety and well-being of all Utahns," said ADL CEO Jonathan Greenblatt. "At a time when our society is polarized and hate crimes are on the rise, we urge legislators in Utah to make the bill currently being considered a high priority."