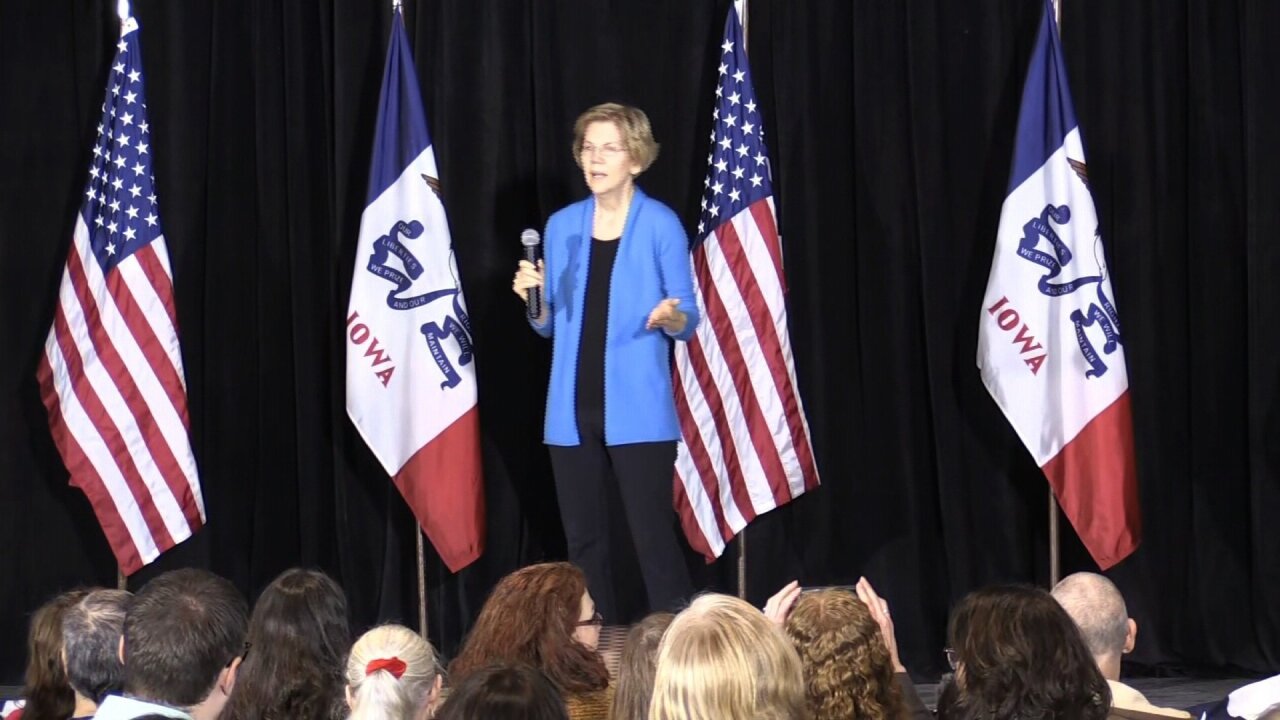 President Donald Trump might be in jail by the time Election Day comes around, Massachusetts Democratic Sen. Elizabeth Warren said on her first full day of campaigning as a declared presidential candidate.

WASHINGTON — President Donald Trump might be in jail by the time Election Day comes around, Massachusetts Democratic Sen. Elizabeth Warren said on her first full day of campaigning as a declared presidential candidate.

“By the time we get to 2020, Donald Trump may not even be President,” Warren said to voters in Cedar Rapids, Iowa, gathered at the Veterans Memorial Building. “In fact, he may not even be a free person.”

The moment marked a notable shift in tone for Warren, who has been reluctant to take on Trump directly by name since she announced her exploratory campaign on New Year’s Eve.

Warren elaborated on those comments to reporters at an event in Iowa City, pointing to the ongoing investigation of Russian meddling in the 2016 election by special counsel Robert Mueller.

“Well come on. How many investigations are there now? It’s no longer just the Mueller investigation,” Warren said. “They’re everywhere and these are serious investigations, so we’ll see what happens.”

Asked whether she believes Trump should be impeached, the senator said it is important to first see Mueller’s findings.

Warren, who has repeatedly said over the weekend that bigotry has no place in the Oval Office, also told reporters that she has already called out Trump for being a racist “many times.”

“I don’t think there’s much doubt of that,” she said.

“Every day, there’s a racist tweet, a hateful tweet, something really dark and ugly,” Warren said of Trump. “And what are we, as candidates, as activists, the press, going to do about it? Are we going to let him use those to divide us?”

The answer to that question, Warren went on to say, was to avoid the trap of engaging in every one of Trump’s actions.

“Here’s how I see it: Donald Trump is not the only problem we’ve got. Yeah. Donald Trump is the symptom of a badly broken system,” Warren said. “So, our job as we start rolling into the next election is not just to respond on a daily basis. It’s to talk about what we understand is broken in this country, talk about what needs to be done to change it and talk about how we’re going to do that, because that is not only how we win, it’s how we make the change we need to make.”

A Warren campaign official told CNN that the presidential candidate does not plan to engage in every single tweet or attack from Trump as the 2020 season ramps up. Much as she has been doing over the last month, Warren will continue to ignore much of his “every day efforts to divide and distract,” the official said, noting that Warren wanted to use her first event of the day to explain her rationale for this strategy.

Warren officially launched her campaign in Massachusetts on Saturday, where she issued a challenge to the super wealthy and called Trump “just the latest and most extreme symptom of what’s gone wrong in America.”

Warren’s weekend kickoff saw her formally joining a growing field of candidates for the Democratic Party’s presidential nomination as the group competes for the opportunity to unseat Trump.