SOUTH JORDAN, Utah — An unusual sight was seen in a South Jordan neighborhood Friday after a crane came crashing down onto a home.

“It’s the most exciting thing that’s happened on this street in a while!” two women said, looking at a truck-mounted crane now on its side.

It was an unusual sight for neighbors in Glenmoore Village.

That home, on the corner of 4000 West and Bonar Bridge Road, had undergone weeks of construction - a new addition was being built on the existing structure.

“The wood [panels] just started [going up], just this week, it’s starting to look like a structure, so it was really exciting,” said fellow neighbor, Sara Rasmussen.

The homeowners did not want to be interviewed, but said they had hired a contractor to build their addition - that company had contracted Larsen Crane to do the heavy lifting.

South Jordan Police say the truck-mounted crane (owner and operated by Larsen Crane) was being used to put up a wall up on the second story when something went wrong.

Images captured by a drone shows the boom truck’s tires 90 degrees in the air near the edge of the property; the arm of the crane crashed through the fence and into the street along 4000 West.

Miraculously, the damage was isolated to the crane, the home and a small portion of asphalt. South Jordan Fire inspected the area to ensure no power or gas lines were impacted during the fall.

The exact variables behind what caused the truck-mounted crane to tip are unknown, police believe the wall was too heavy, others on scene thought the arm was extended too high for the job.

“It definitely was a risky move, or what appears to be some risk associated with the move,” said South Jordan Fire Department Deputy Chief Ryan Lessner.

Neighborhood residents gathered outside and watched as two cranes secured the truck-mounted crane on each side and hoisted it back up.

“I just keep saying this is crazy, that’s what I keep saying,” Rasmussen said.

The homeowner said the project was just one month from completion, but today instead of seeing progress he watched as crews pulled the machinery from the wrecked addition.

“I just feel bad for these people,” said Bowels. “Weeks, it’s been weeks… like they’ve been doing [construction] in the snow."

South Jordan Fire Department said fortunately, no one was injured. The crane operator got out just fine.

SJPD said there will not be an investigation due to the fact that it is a civil matter that occurred on private property.

Fox 13 reached out to Larsen Crane to see what caused their crane to tip, they have not gotten back to us. 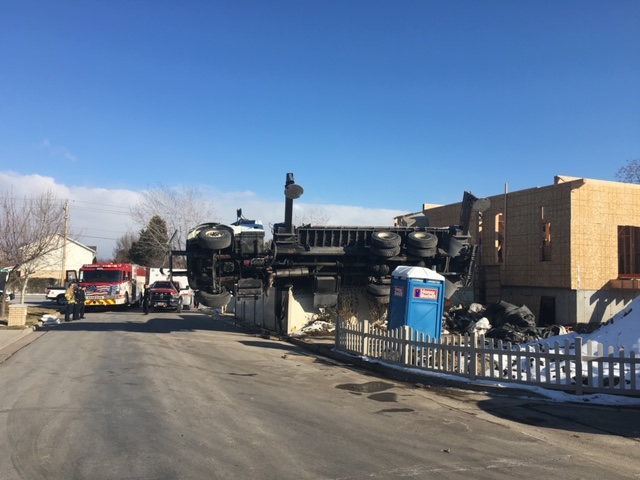