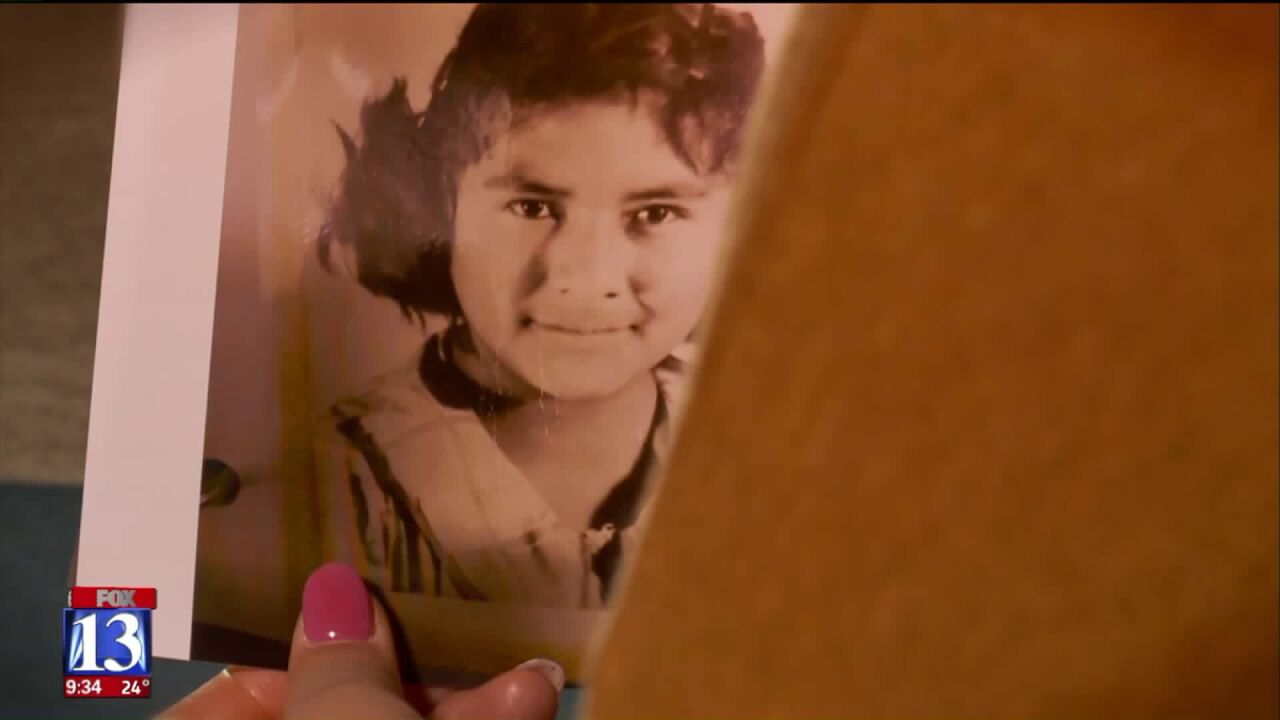 SKULL VALLEY RESERVATION, Utah — SKULL VALLEY RESERVATION, Utah - For decades, indigenous women in Utah and across the country have gone missing and many are presumed dead, but there is no way to get an accurate account. The women are missing and so is the data. But a growing number of people are demanding justice and answers for those who’ve disappeared or even turned up dead.

Fox 13’s Tamara Vaifanua, in an exclusive report, looked into murdered and missing indigenous women in Utah, and what police are doing about the issue.

Allen often visits the final resting place of her Aunt, Myrtle Bear Pete at a cemetery on the Skull Valley Indian Reservation in Tooele County.

Allen is haunted by the memory of her aunt’s tragic death.

It was February 1967 when Allen last saw her aunt along Skull Valley Road.

Allen was just a child when Myrtle Bear Pete’s body was found on the side of the road – 300 yards from her home.

“My grandpa told me to stay in the car. I kinda like really heard my mom screaming and crying. My grandpa too,” Allen recalled. “They were like, kneeling on the road. I saw lots of blood.”

Pete may have tried to walk or crawl away from the road according to the Salt Lake Tribune Article,  based on the abrasions on her arms, and mud on her shoes.

An autopsy later revealed Pete died of exposure.  Why was there blood on the road? Why was she badly beaten? Pete’s family never got any answers from Tooele County investigators.

“I just grew up with people dying around me," Boyce said.

Boyce organizes rallies, raising her voice for those who have gone missing or worse.

“My grandma Jessie was actually murdered in Provo, Utah. She was getting her GED and on the night of her graduation. Her ex-husband found her and shot her in the head. It just tore our family into pieces,” said Boyce.

Native American women are murdered at 10 times the national average on some reservations. That’s according to according to the U.S. Department of Justice Full Report of the Prevalence, Incidence and Consequences of Violence Against Women.

“Whenever we go missing or if we're murdered, there's a lot of confusion about jurisdiction on whose case it belongs to. If it belongs to local police departments or if it belongs to the FBI,” said Boyce.

The epidemic exists off the reservation as well.

A first of its kind study by the Urban Indian Health Institute found that 506 indigenous women have either gone missing or were murdered in 71 cities. Salt Lake City was among the top 10 cities, with 24 cases.

“It was eye-opening. I was like, 'wait a minute, this information isn't accurate,'” said Detective Greg Wilking with the Salt Lake City Police Department.

Wilking said the department failed to look at circumstances in each case. Some were accidental deaths or solved missing person cases. Further evaluation revealed the actual number was two homicides. Police admit uniform reporting guidelines is a problem across the state.

“We might be different than St. George or Price or Ogden," Wilking said.

Other reasons researchers say these women are missing in the data is racial misclassification and media biases.

“A lot of the names that we carry have not even been on any news sites,” said Boyce.

Another hurdle is poor relations between law enforcement and native communities.

“We said, look we believe there is a problem. We support that theory. We need to talk about this,” said Wilking.

The Salt Lake City Police department is working to change course. They vow to help tribal leaders get the resources they need to solve these cases.

“Thank God for the law enforcement in Salt Lake because it`s been a long time,” said Allen.

More than five decades later, Allen struggles to forget the pain of losing her aunt. She is constantly reminded of her as she travels down Skull Valley Road almost daily. She says the native way is to forgive.

Allen burns sweetgrass at the spot where Myrtle Bear Pete was found to give her peace. At least Allen knows where her Aunt is, even if she doesn’t know what happened to her.

“Whatever she went through, it will take care of her," Allen said.

In Utah, Representative Angela Romero would like to designate May 5 as Missing and Murdered Indigenous Women, Girls and LGBT Awareness Day.

Lawmakers are expected to approve the resolution at this year’s legislative session.