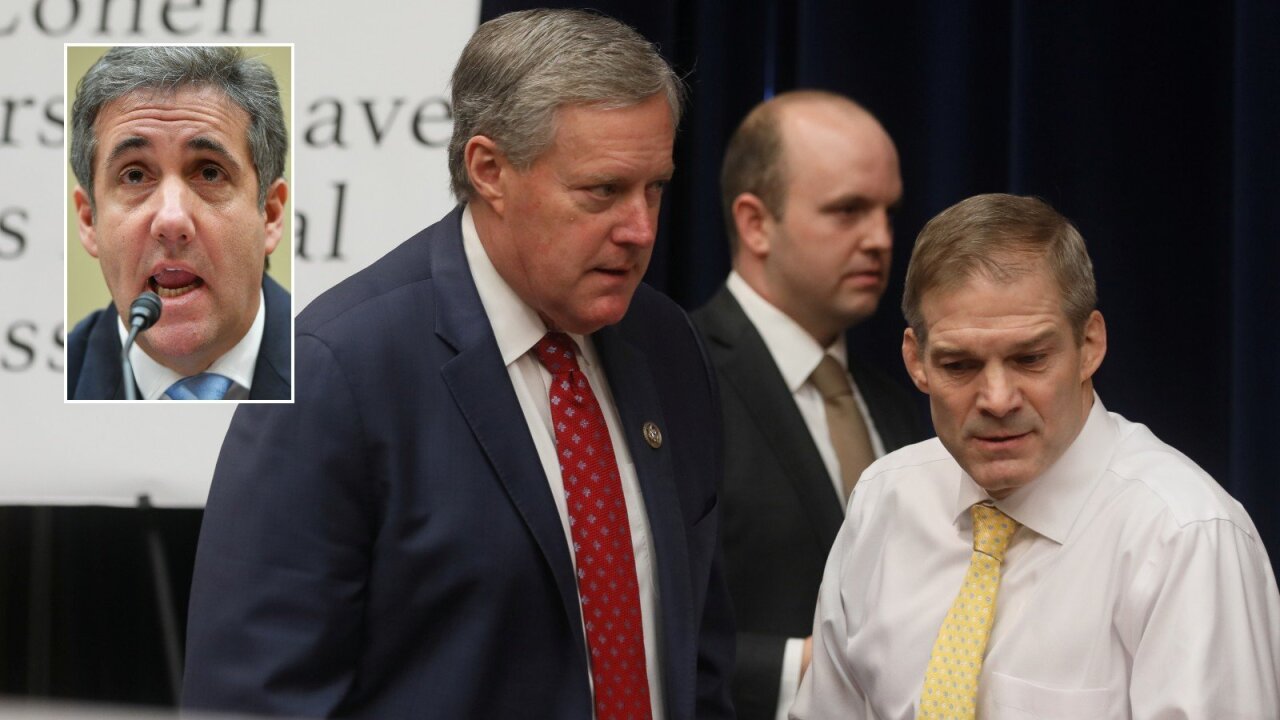 The criminal referral — sent by Ohio Rep. Jim Jordan, the top Republican on the Oversight Committee, and North Carolina Republican Rep. Mark Meadows — outlined several areas of testimony they urged the Justice Department to investigate, including Cohen’s claims Wednesday that he did not seek a job in the Trump White House, his denial of committing bank fraud, as well as his assertion that the did not have any reportable contracts with foreign entities.

“I was extremely proud to be the personal attorney for the President of the United States of America,” Cohen told lawmakers Wednesday. “I did not want to go to the White House.”

Yet Republicans have pointed to court filings from prosecutors in the Southern District of New York that stated Cohen “privately told friends and colleagues, including in seized text messages, that he expected to be given a prominent role and title in the new administration” — an assertion Cohen said Wednesday was “not inaccurate.”

“Mr. Cohen’s testimony is material to the Committee’s assessment of Mr. Cohen’s motive to monetize his former association with President Trump,” Jordan and Meadows wrote to the Justice Department on Thursday. “It is essential that the Department of Justice investigate these remarkable contradictions between Mr. Cohen, the SDNY prosecutors, and the public accounts of witnesses with firsthand information.”

A spokesperson for the Justice Department said it is reviewing the referral.

Lanny Davis, Cohen’s attorney, called it “a sad misuse of the criminal justice system with the aura of pure partisanship.”

“Mr. Cohen testified truthfully before the House Oversight Committee. He took full responsibility for his guilty pleas. He also backed up much of his testimony with documents. It may not be surprising that two pro-Trump Committee members known have a baseless criminal referral,” Davis said in a statement Thursday.

Meanwhile, some Democrats have suggested that the claim Cohen perjured himself is misguided.

Rep. Jamie Raskin, also a Maryland Democrat, told CNN’s Kate Bolduan on “At this Hour” Thursday morning that the line of questioning from his Republican colleagues was an “irrelevant distraction” and “everything (Cohen) said was perfectly internally consistent and coherent.”

Sources have told CNN, however, that Cohen was angling for a job in the White House, but was sidelined by members of Trump’s family.

One person described Cohen as having become “disenfranchised” in the early months of the Trump administration — but that he nevertheless continued to portray himself as Trump’s go-to guy. The President also suggested Cohen join the White House counsel’s office, but former White House counsel Don McGahn said Cohen didn’t have the necessary experience and background to work there, and Trump dropped it.

Jordan and Meadows also claim that Cohen’s testimony that he “never defrauded any bank” was “intentionally false” given that Manhattan prosecutors “specifically referred to Mr. Cohen’s crimes of making false statements to financial institutions as ‘bank fraud'” in a footnote of his plea agreement.

Cohen pleaded guilty to making false statements to a financial institution, however, not bank fraud, and prosecutors have not alleged that any bank lost money.

The GOP lawmakers additionally accused Cohen of lying about his contacts with foreign entities, a point highlighted by Meadows at Wednesday’s hearing. Cohen said he would review the form and amend it if necessary.

This story has been updated with additional developments Thursday.