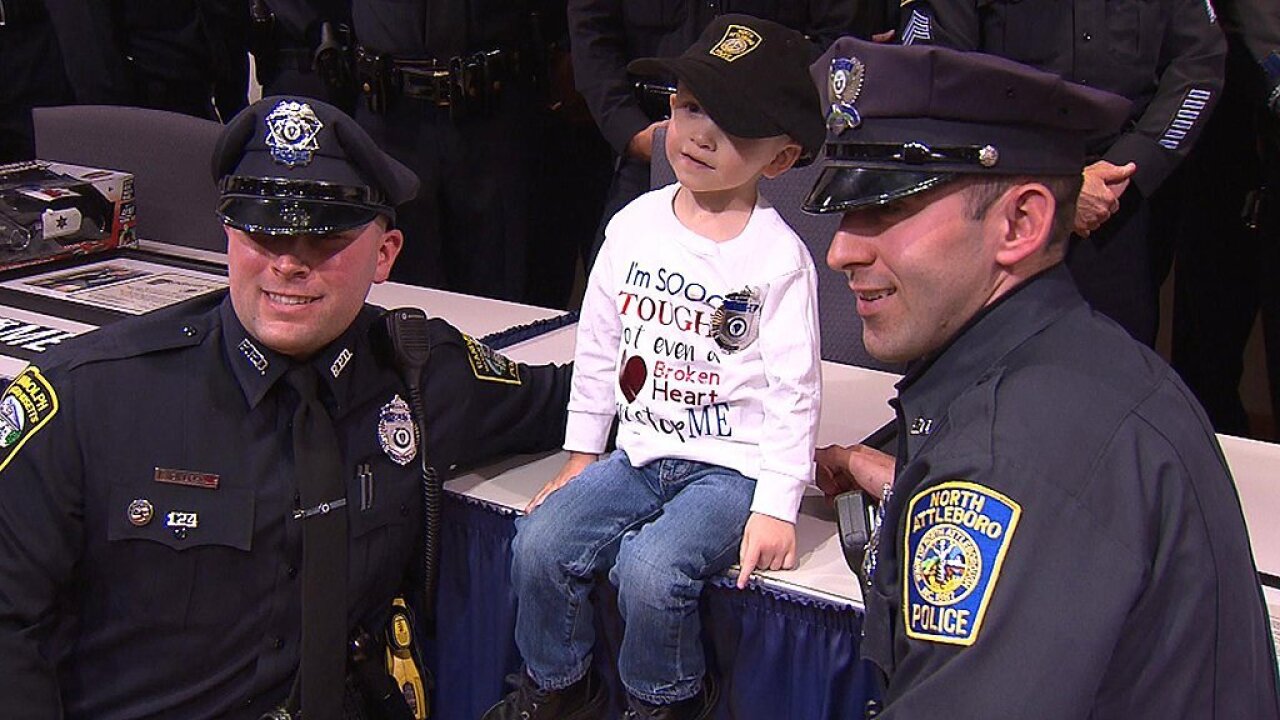 The North Attleboro and Randolph Police Departments teamed up to make the sick toddler’s dream of becoming a police officer a reality.

Mikey’s dad, Thomas Grover, says his son has admired police officers, since he was able to talk.

“He sees a police car and says, ‘police man’ before he could say Mama,” Grover told WBZ-TV. “It was ‘police man, police man.’ It was funny.”

But there’s nothing funny about what Mikey has been through.

“Put it this way, Mikey had an 85-percent chance of not making it pass year 1 and here he is turning 4 on April 15th,” said Grover.

Mikey also suffers from a rare birth defect that affects his heart and his major organs. He’s now preparing for his third open heart surgery.

To give back, the family donates care bags to other sick children called “Mikey’s Brave Bags.”

When Officer Kevin Gilbert of the Randolph Police Department heard that he wanted to do something for Mikey. ”

I just want him to remember everyone in this room has his back,” Officer Gilbert said. “If he ever needs anything, he can now call us.”

Police officers from several communities, along with his big sister’s cheer squad, came out to support Mikey.

“He now has thousands of brothers and sisters who are looking out for him,” said Officer Gilbert.

Along with three teenage sisters.

“I mean it’s crazy. Some nights are hard when no one is home, but we’ve kind of learned to, like, be there for each other, me and my sisters. So, we’re ready for it to be over and we’ll always support him,” said 13-year-old big sister Summer Grover.

And so will this community.

Mikey received a badge, a new uniform and a lifetime of memories.

Meanwhile, the day wouldn’t complete without arresting a bad guy. An officer allowed Mikey to handcuff him and place him in a holding cell.