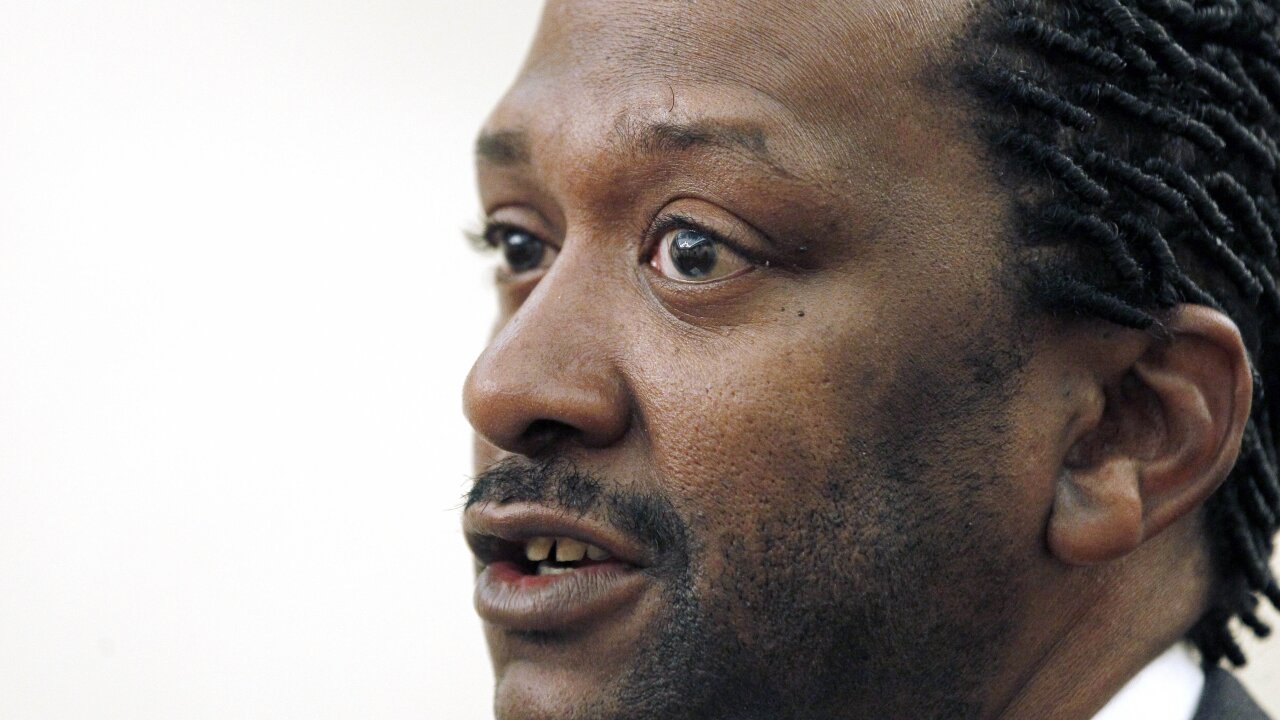 In this Thursday, June 14, 2012 file photo, James Stern is pictured at a news conference in Jackson, Mississippi. One of the largest and oldest neo-Nazi groups in the U.S. appears to have an unlikely new leader: Stern, a black activist who has vowed to dismantle it.

(CNN) — Call it a clever twist of fate, a shrewd power play, or simply comeuppance for one of the largest neo-Nazi groups in America.

Its new president is a black man — a California pastor and activist — with one goal in mind.

“Change it, reverse it, and ultimately destroy it,” James Hart Stern told CNN in an interview Friday.

Stern says the former president of the Detroit-based National Socialist Movement, Jeff Schoep, turned the group over to him amid infighting by the group’s core members, and to escape the threat of a lawsuit filed against NSM for its alleged role in the violent 2017 clashes in Charlottesville, Virginia.

The NSM and Schoep, along with more than 20 other organizations and individuals including convicted murderer James Alex Fields, are being sued civilly by victims who were injured at Charlottesville.

The lawsuit says, “The violence, suffering, and emotional distress that occurred in Charlottesville was a direct, intended, and foreseeable result of Defendants’ unlawful conspiracy.”

Schoep claims he was “deceived” by Stern. In an open letter to NSM members, which he also sent to CNN, he admits to the “paper appointment” of Stern as president. But he claims Stern “convinced me that in order to protect our membership from the ongoing lawsuit, I should sign over NSM’s presidency to him.”

One of Stern’s first acts as president was to ask a judge in the Virginia lawsuit to issue a summary judgment finding NSM liable for conspiring to commit violence in Charlottesville. In his letter to NSM members, Schoep maintained his and the group’s innocence, blaming counterprotesters for the violence, and vowing to wrest control of the group from Stern “in a court of law.” The presiding judge on the case has yet to issue a ruling.

“It’s completely bizarre,” said Keegan Hankes of the Southern Poverty Law Center, which monitors hate groups. He adds that white nationalists both in and out of the group were “completely blindsided” by the change in leadership.

It’s an apparent twist reminiscent of the Oscar-winning film “BlacKkKlansman,” which told the true story of Ron Stallworth, a black police detective in Colorado Springs who infiltrated the Ku Klux Klan beginning with a phone call. Eventually, a white colleague subbed for Stallworth during face-to-face meetings with Klan leaders.

“The difference in my situation is I was able to use my face every day,” Stern said. “There was no deception here. This was a man (Schoep) who willingly talked to a black man and willingly signed it (NSM) over to a black man.”

Stern said his path to taking over the NSM started in 2014, when Schoep learned that Stern had the prison ID of noted KKK leader Edgar Ray Killen. The pair were housed in the same Mississippi prison when Stern served time for mail fraud, Stern said.

Though Schoep wanted the ID, Stern refused to hand it over. Instead, they continued their conversations over the years, Stern said.

“When he and I talked, he made it very clear that I was not his friend,” Stern said, adding that their talks intensified after the NSM faced increased scrutiny over the Virginia lawsuit.

Stern said Schoep, who ran the NSM since 1994, initially wanted to dissolve the organization, but Stern convinced him otherwise.

“I told him if he dissolves it, someone else is just going to get it and re-incorporate it, rebrand it. I said if you gave it to me, that won’t happen, and at least you will know who has it.”

‘A hail Mary’ or ‘fraudulently manipulated’

After more phone calls and conversations, Stern said he convinced Schoep to turn the movement over to him.

“It was a hail Mary of him trying to get out of the consequences of his actions,” Stern said, referring to the accusations in the Virginia lawsuit.

Schoep, in his letter to the NSM, said he was “fraudulently manipulated” by Stern, and that he has given the group’s current chief of staff, Burt Colucci, control of the group’s operations.

Stern says he knows the NSM could rebrand and start anew. But Stern’s goal is to maintain control of the name and website.

“You can call yourselves the mother chickens of turtles, for all I care,” Stern said. “But that reputation you carry as NSM, which carries fear and revere, it’s gone.”

Stern hopes the NSM name, once associated with Holocaust denial, sits dormant on a corporate shelf long after he dies. But he doesn’t want to begin this fight alone.

“I expect every minority, Jewish and black, which has been affected by it… to contact me and reach out so we can put our heads together and make sure that this is done productively,” he said.

While Stern shies away from comparisons to “BlacKkKlansman,” he admits he’d love to make a statement by paring the NSM website with other Hollywood films.

“I’d like to see ‘Schindler’s List’ … and ‘Amistad’ … stream on that website,” he said. “So, generations of nationalists have to look at it for the first time.”