Police investigating rash of vandalism at parks across Kearns 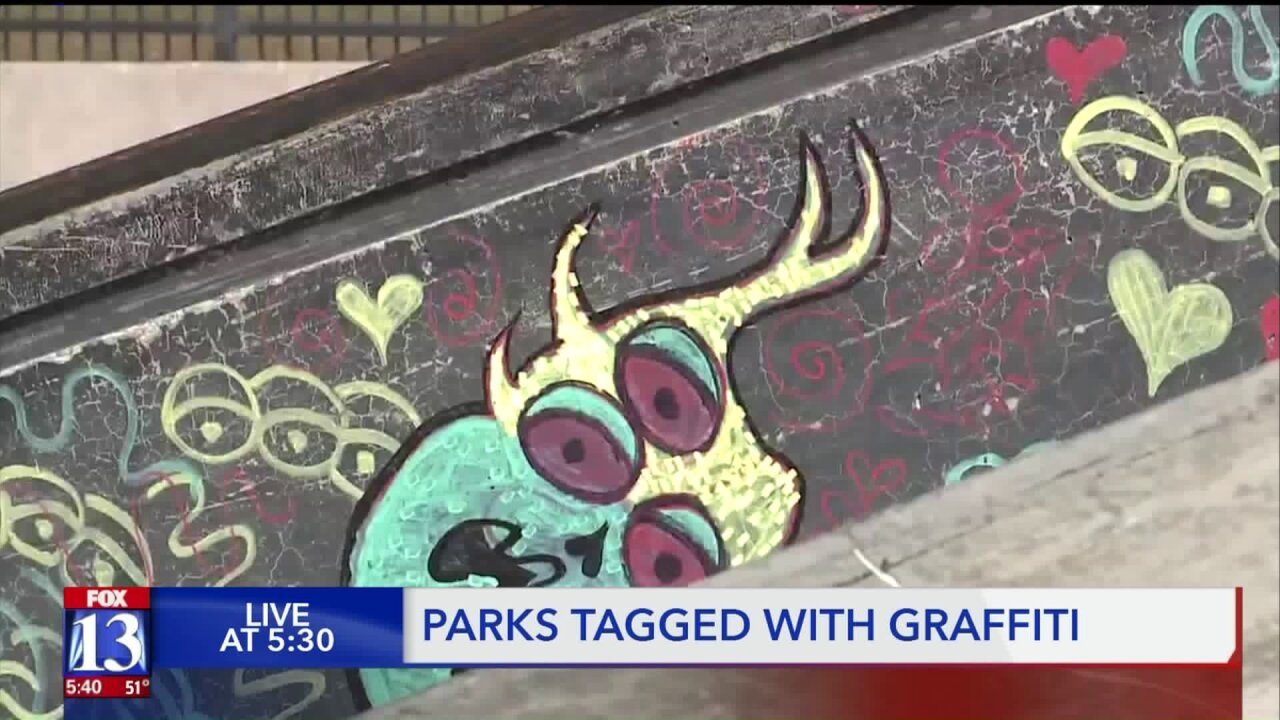 KEARNS, Utah — Kearns Metro Township leaders are fed up after vandals went on a spray-painting spree at parks across town.

Salt Lake County Parks and Recreation explained that the problems go beyond graffiti, and repairs will cost thousands of dollars. The graffiti has sparked a police investigation.

At David Gourley Park in Kearns on Tuesday, 3-year old Tristan enjoyed a warm spring day with an afternoon on the park playground.

"We promised the grandson we would come play," said grandmother Ava Cole, with a laugh.

She and her husband guided Tristan across the monkey bars and down the slides, and they played pretend.

Right next to where Tristan ran and squealed with excitement, a rock climbing wall featured a blue spray-painted phrase that read, "F*** Trump."

On the park's bathroom building, a slew of spray painted words littered the outside walls.

"We just kind of try to put it out of our mind a little bit, because [we] don't like to see it," Cole said.

While Tristan can't read, Cole said many elementary school children pass through the park on their way to David Gourley Elementary next door.

"It feels invasive," she said, of the graffiti. "It puts a deterrent on the community."

Before the blue messages appeared, Kearns Metro Township Mayor Kelly Bush said someone had spray painted graphic images and racist words at the same park. Salt Lake County Parks and Rec said they had just covered those messages up, when they discovered the new graffiti on Tuesday.

"It's just putting a really horrible message out to our families that want to come to these parks," she said.

Also on Tuesday just hours prior, Parks and Rec Associate Division Director Wayne Johnson said a crew member found graffiti on a building and the pavement at the Oquirrh Park baseball triplex.

"We see a lot of this extremely heavy in the spring," he said, of the graffiti. "The snow comes off, and we have a lot of taggers that like to come out and put their marks on the wall."

Johnson said they recently found someone cut out and took copper pipes and plumbing fixtures at Bruce Field Park. The damage has made the bathrooms inoperable until parks and rec spends thousands of dollars to fix it.

Less than two weeks ago, vandals spray-painted a number of pictures and words all over the skate park at Oquirrh Park.

Each fix is expensive, they said, and takes days to clean up.

"The skate park... we'll be there for three or four days and we'll be into that several thousand dollars to get that off," Johnson said.

Bush said they are now looking at installing security cameras, and they're working with Unified Police.

"It's very, very expensive to continue doing these repairs," Bush said. "We need to do something. And, we're just trying to decide what is best way."

"This is definitely felony level damage that we have at this park," he said.

He said anyone with information related to the graffiti should call them at 801-743-7000.