Bump stocks are now illegal, but this Utah man is keeping his for now 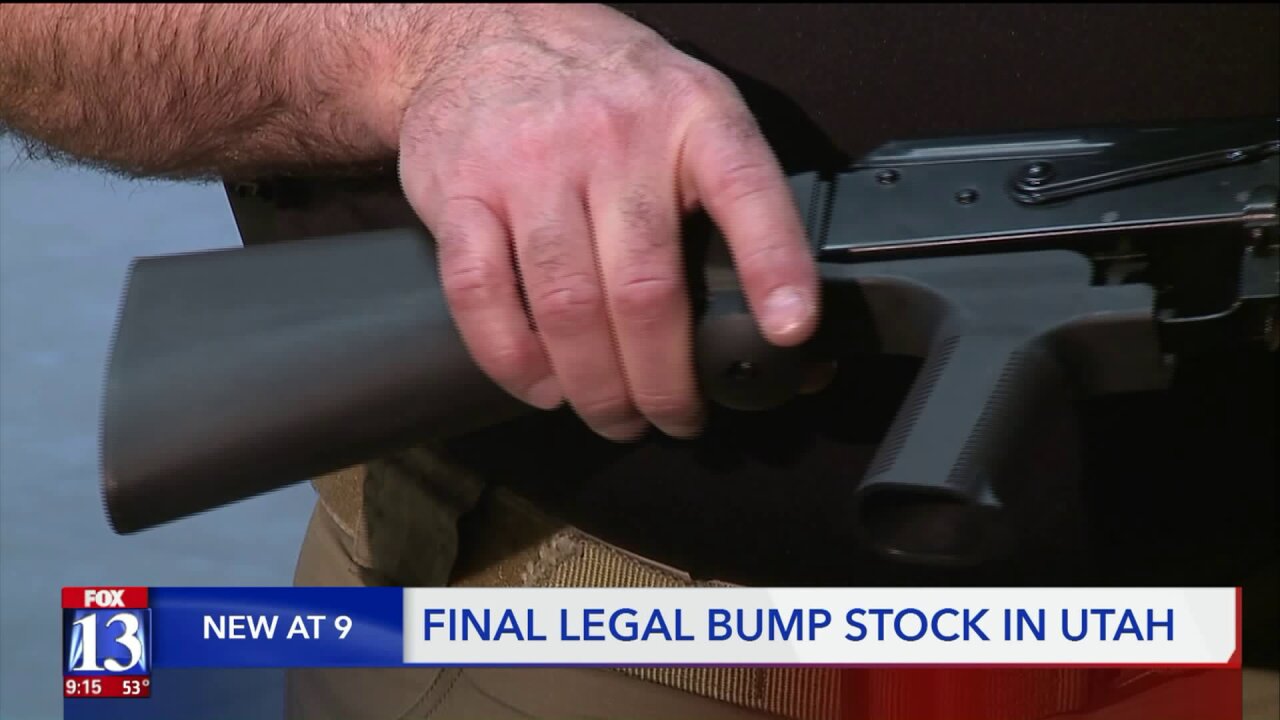 SALT LAKE CITY — The 90-day period to either destroy or turn in devices known as bump stocks is now over. The Trump Administration has fulfilled its promise to ban bump stocks after they were used by a mass shooter in Las Vegas.

Stephen Paddock shot and killed 58 people at a country music concert in Las Vegas on October 1, 2017. He used semi-automatic firearms equipped with bump stocks to kill his victims from his Mandalay Bay hotel room on the 32nd floor. The shooting was the deadliest in modern US history.

A bump stock attaches onto semi-automatic firearms, allowing them to shoot similarly to automatic weapons. Instead of filing an executive order or calling on Congress to change the law, President Trump asked the Department of Justice to classify bump stocks as machine guns.

Bump stocks were primarily used for the thrill of being able to shoot fast. They have no practical sporting or hunting use.

Owning, buying, or selling a bump stock is now a federal crime. Offenders could face a 250,000 dollar fine and 10 years in prison.

Clark Aposhian, chairman of the Utah Shooting Sports Council, said he believes he may have the only legal bump stock in Utah. He filed an emergency motion to keep his bump stock, pending the results of various challenges to the Trump Administration’s order.

“I think this sets a dangerous precedent,” Aposhian said. “This is not a machine gun.”

Aposhian said the method in which bump stocks allow a semi-automatic weapon to fire more quickly have nothing to do with the mechanics of an automatic weapon. For that reason, he believes a ban would only be Constitutional if Congress created a law to get rid of the devices.

“You can fire a machine gun with one hand,” he said. “You cannot fire a bump stock or have it bump fire effectively with one hand. You have to have two.”

The Bureau of Alcohol, Tobacco, and Firearms has encouraged anyone with a bump stock to turn it in to federal agents or destroy it at home with department-approved techniques.

Aposhian said he believes almost everyone has already complied with ATF’s new regulations.

The ATF has so far not responded to Fox 13’s requests for a count on how many bump stocks have been turned in.

We asked the ATF today... how many bump stocks have been handed in, now that the 90-day period is over?

Still waiting on a response.

Another option is to melt/ shred/ crush the bump stock... you know, honor system. Here are specific instructions.https://t.co/y6J5CjMXjE

“If (bump stock owners) ask for my advice, I would tell them to comply with the law,” Aposhian said.” An extremely overwhelming majority of gun owners are law abiding. They’re not going to stand and die on their bump stocks.”

“Do you worry about someone else doing what the shooter in Las Vegas did?” asked Fox 13’s Adam Herbets.

“I’m not worried, specifically because there’s been no pattern of it,” Aposhian said.