‘Die you little f—‘: Utah woman behind bars after police say she strangled son with disabilities 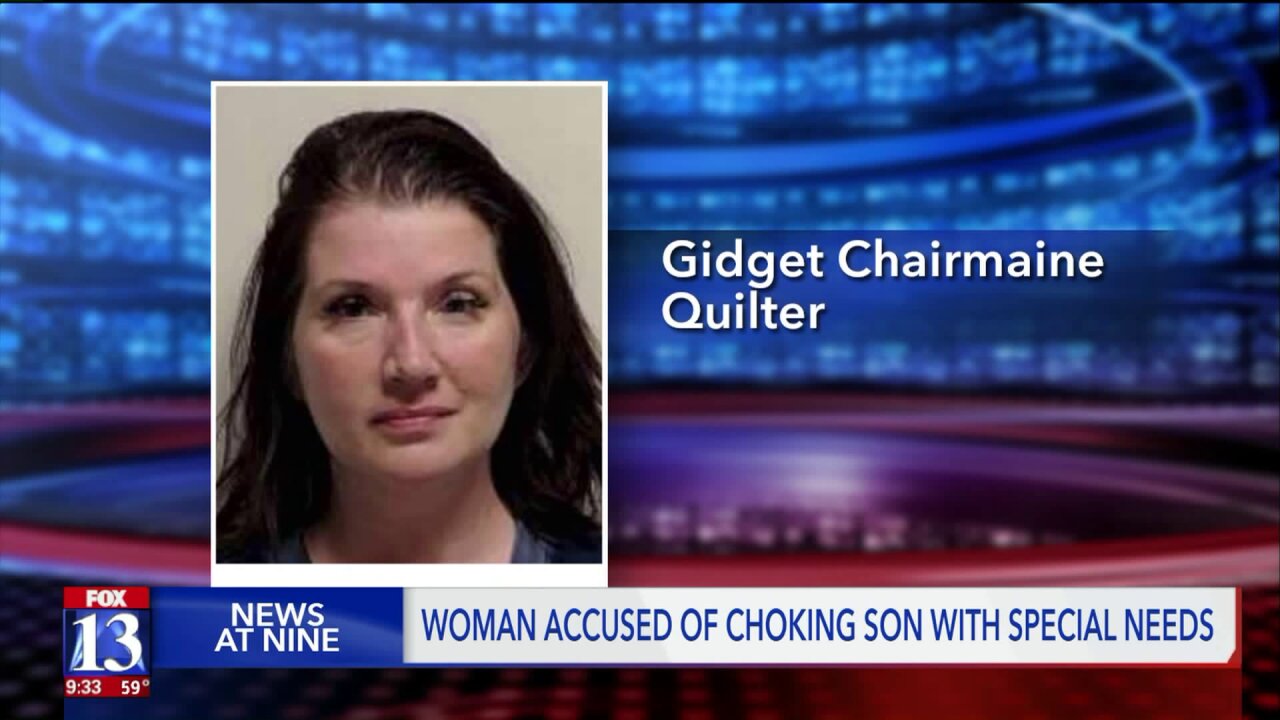 PLEASANT GROVE, Utah — A Utah woman is behind bars after allegedly strangling her 21-year-old son, who has disabilities that include a  mentally diminished capacity, while screaming she wanted him to die.

Pleasant Grove Police Department said their agency was responding to a domestic violence call at the Viewpointe Apartment Homes last Saturday, where a mother had thrown a pair of scissors at her 13-year-old son.

While investigating, police were told the mother, 42-year-old Gidget Quilter, had allegedly assaulted her adult son, who is mentally and physically disabled, earlier that day.

Police said six of Quilter’s children, all of whom are between the ages of 2 and 17, witnessed the assault.

“She was making statements to the account of, ‘die you, die,’ while the son’s airway was being cut off,” said Captain Britt Smith with the Pleasant Grove Police Department.

According to a probable cause statement, the 21-year-old , "had defecated and had thrown feces all over his room.”

“Mom was upset with the mess and had reportedly choked her handicapped son,” Smith said.

Quilter told police her 21-year-old son has Langer-Giedion Syndrome. She explained that the condition is secondary to severe autism and that he is not able to speak, according to the probable cause statement.

Quilter’s 17-year-old daughter explained what happened to police, saying she had gone into her brother’s room to help clean up the mess. She said when her mother sat on the bed next to where he was kneeling on the floor, he began to scream.

“Her mother then grabbed [her son] by the front of his throat with her right hand and the back of his head with her left hand before she pushed him to the ground and straddled his trunk and arms with her legs,” the daughter told police.

“[Quilter] applied so much pressure to [her son's] neck that the screaming stopped because she cut his ability to breathe off,” the statement continued.

An officer said he inspected the man's body and found a red mark on the upper right side of his back. He also found several red marks, one of which was bleeding, on the left side of his body, according to the probable cause statement.

“This individual is not verbal, not in the capacity to defend himself or fight back,” Smith said. “We have an obligation to make sure that they are safe in their environment because they can’t make themselves safe.”

Police said that daughter captured an audio recording – in it, the daughter and a 13-year-old brother can be heard yelling, “Stop, mom, stop!”

Later in the recording police said you can hear Quilter yell, “Die you – die you little f---,” the probable cause statement said.

The statement said Quilter’s daughter turned the recording over to police.

“She had been confronted with the audio recording during her interview with police on Saturday, she obviously was made aware of where that recording had come from and then tried to get her daughter to change her story,” Smith said.

According to police, the mother was released from jail the following day. The daughter told police her mother asked her to meet at the Hyatt House (where Quilter and her husband checked in after she was released).

According to the probable cause statement, the daughter said: “her mother then told her that if she told the police that her statement and the recording were explained to say that it was a 'misperception' that it would help her, that she needed a doctor, not the police or jail."

Quilter is now being held in jail without bail, facing six misdemeanor charges of domestic violence in the presence of a child, a felony charge for tampering with a witness and a felony charge for aggravated assault committed with force/violence to injure.

Police said the family is no longer at the Viewpointe Apartment Homes. Gidget is still in jail but no longer has a home. Her kids are now in the custody of her husband and her other adult children.