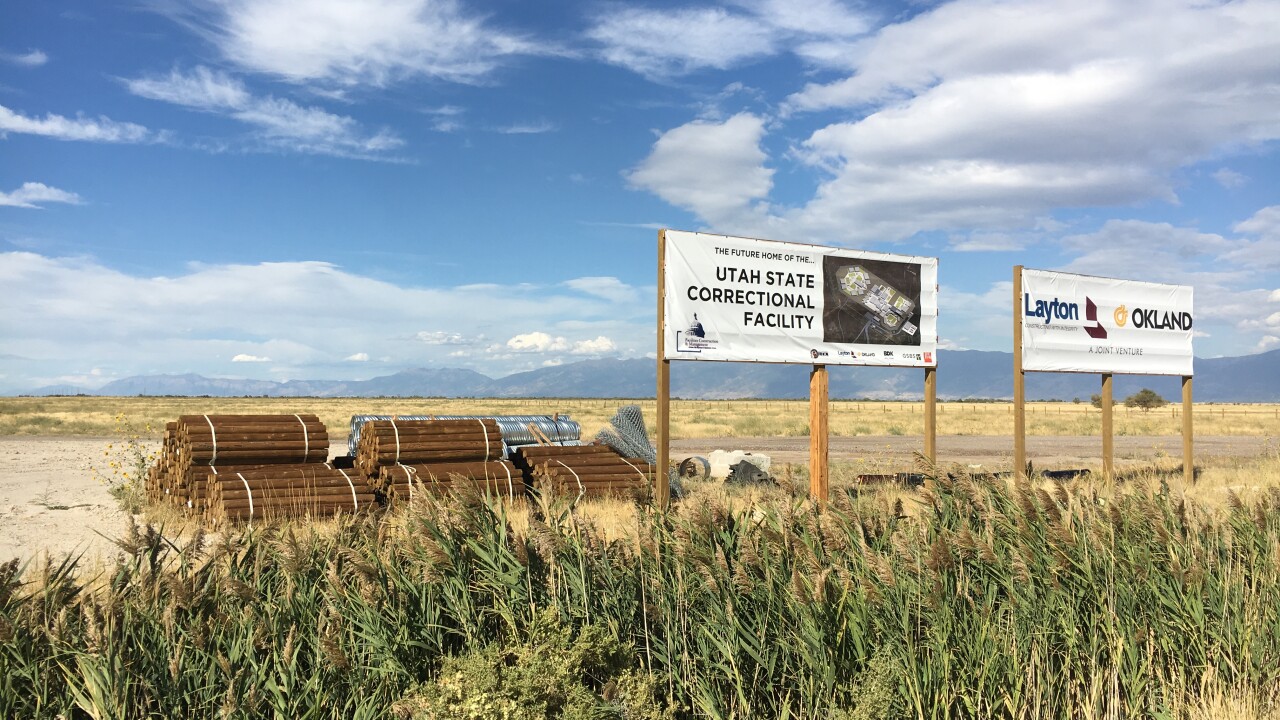 Materials and signs at the Utah State Prison site near I-80 and 7200 West in Salt Lake City. (Photo by Ben Winslow, FOX 13 News)

At a briefing on the progress of the new prison, Utah Department of Administrative Services Deputy Director Marilee Richins said labor and supply costs have been rising as it competes with other construction projects around the state and nation.

The project was originally quoted as about $550 million for a new prison. It jumped to $650 million when the site in Salt Lake City's Northwest Quadrant was selected. Now it's at $692 million and, Richins said, there's an 18-22% increase expected with labor and supply issues.

A lot of labor has been swallowed up by another major project in the area: the nearby multi-billion dollar redesign of Salt Lake City International Airport.

Governor Gary Herbert's office has pressured DAS to keep costs down. So they're reducing the number of beds by 400 and cutting out some of the state-of-the-art ideas originally planned for the prison. But she insisted they won't skimp on security.

"Anything that would compromise security or the safety of the public or the workers or the inmates is off the table," Richins said.

The new prison is being built to replace the aging one at Point of the Mountain. That land will be developed as a massive tech campus as part of the Silicon Slopes tech hub springing up there.

"We’re a victim of our own success," said Sen. Jerry Stevenson, R-Layton, who oversees appropriations for the Senate Majority. "All you have to do is drive around the valley and look at what’s going on."

Sen. Stevenson told FOX 13 on Friday that lawmakers predicted a dip in the economy when planning for the prison. What they didn't expect was the good times to keep going. It's made costs for everything from new schools to housing more expensive.

"Because the entire area is seeing inflation and price increases, the price of what we have to work with in Draper will go up also," he said.

Asked if he expected prison builders to go back to the legislature and request more money, Sen. Stevenson told FOX 13 he would be surprised if they didn't. But he anticipated the state would eventually recoup costs.

"Money will come back to the state in a regulated way at some point in time," he said. "As the state grows and the area out there grows we will see income. Some may come to the city, but eventually that will flow back to the state of Utah."

But the Salt Lake City site has been controversial. Residents opposed it and it's faced issues with soil because it's so close to the Great Salt Lake. Richins said every site from Eagle Mountain to Tooele County faced challenges.

"We told them this was not the right place to build a state prison," said Senate Minority Whip Luz Escamilla, D-Salt Lake City, whose district includes the new prison site.

Still, she acknowledged it was too late to turn back now and some costs can't be controlled. She said she would not be surprised to see prison contractors come back to ask for more money.

"We’re getting a smaller place for more money. There’s a time frame and we haven’t been able to meet those deadlines. We need to move forward but at the same time I think we should be making everyone accountable as we move forward," Sen. Escamilla said.