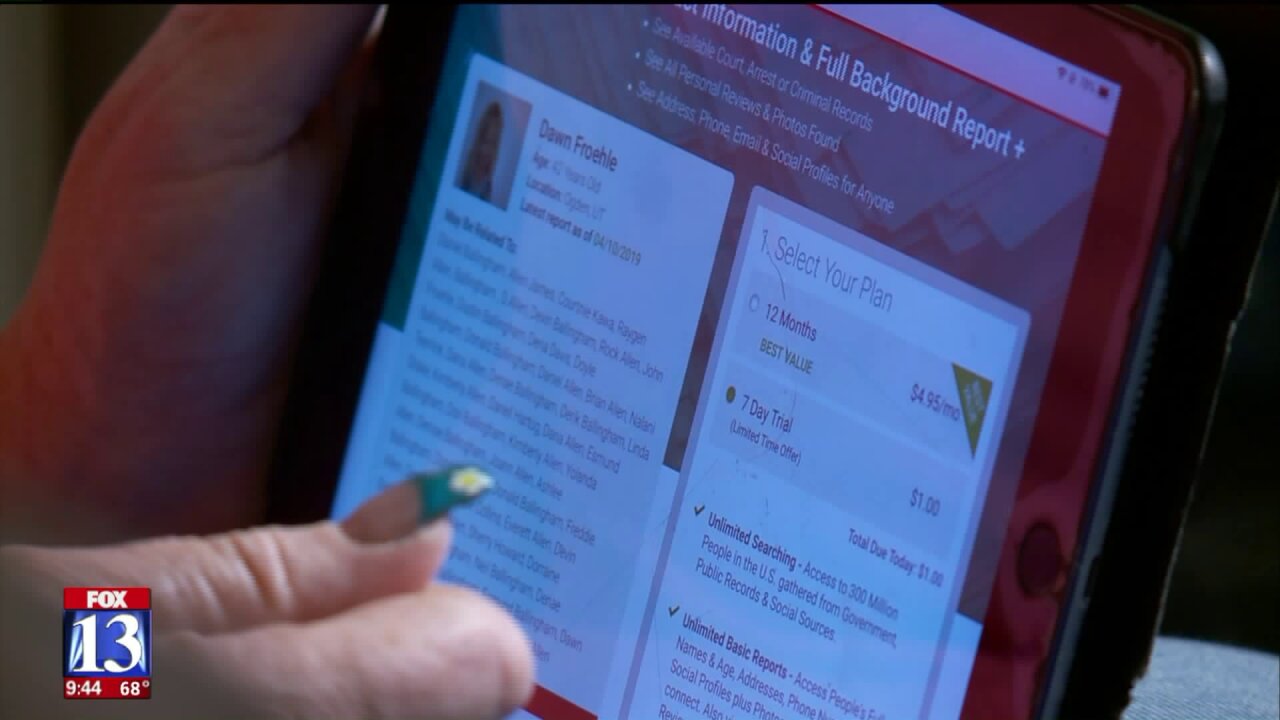 When Dawn Froehle googled her name, MyLife.com popped up first, before Facebook and LinkedIn.

"Oh my gosh, so it's showing I have criminal and civil court records. Lawsuits, liens, bankruptcies. I've never even had a speeding ticket," Froehle said.

Froehle isn’t the only one. Erik Bingham, who works for Fox 13, said MyLife.com is saying the same about him.

"It shows right here criminal or civil court records found on my background report," he said.

Both Froehle and Bingham said they don’t have a criminal record whatsoever.

If you click to learn more, the site allegedly starts scanning the internet.

"It's a little nerve-wracking especially when this pops up. Attention all in red, graphic content and sensitive details," Bingham said.

After several minutes it asks you to pay, so we did. It turns out Bingham’s criminal record was a speeding ticket from more than five years ago.

Bingham says he would never consider a speeding ticket a criminal offense.

In order to look at your background report, MyLife charges $4.95 a month but makes you pay for 12 months up front.  You can also pay $1 for a 7-day trial, but if you don’t cancel during the trial period, the site will start charging your credit card $22.95 a month.

MyLife has other inaccuracies.

"That picture just makes me sick to my stomach," Froehle said.

Froehle’s profile picture is a photo of her youngest daughter.

"Why is her picture? She was two or three there. That's scary. That is not me. That's my baby. No. Where'd they get this photo from?" Froehle said.

X-Mission founder, Pete Ashdown said the internet is saturated with illegitimate sites, but he wondered how MyLife.com showed up so high in Google's ranking system.

"It`s obviously being manipulated by somebody and so they found a way around Google's page rank algorithm," Ashdown said.

When FOX 13 reached out to Google, a spokesperson provided a statement that reads, "our goal is always to provide relevant results for the billions of queries we get every day. Our systems are not always perfect, and we continually work to improve and deliver results that people find helpful."

"It makes it look serious and legitimate and I think that's what`s scary. I'm wondering how they get away with it," Froehle said.

MyLife has faced multiple lawsuits since its inception in 2002. Founder Jeffrey Tinsley initially named his website reunion.com. In 2008, the site now known as classmates.com faced a class action lawsuit accusing the company of false advertising and deceptive marketing. Tinsley settled, paying $9.5 million. Then again in 2011, the site now known as MyLife.com faced another class action suit claiming they were using similar tactics under a new name, but that suit was later dismissed.

"Fraud has been around since the dawn of commerce so I wouldn't say the internet invented it. It certainly has made it easier," Ashdown said.

FOX 13 reached out to MyLife.com several times and never heard back.

However, if you want to get your information removed, you can call the toll-free number, 1-888-704-1900. All you have to do is ask the site to remove your name, but if you ask where the false information comes from, you'll hear a script like this:

"Our service MyLife.com uses a special technology for the internet finding those sites that have your information. Hundreds of millions of records including credit cards, bank account numbers, and passwords are stolen all the time in data breaches. That's why," said a MyLife.com call center employee after Froehle asked where the information came from.

While getting your name removed from the site is relatively easy, some would argue, in a world where googling is almost second nature, the damage has already been done.

"This could ruin somebody's life if somebody took it seriously," Froehle said.

"That's all it would take to decide between me and someone else is this little red alert thing," Bingham said.