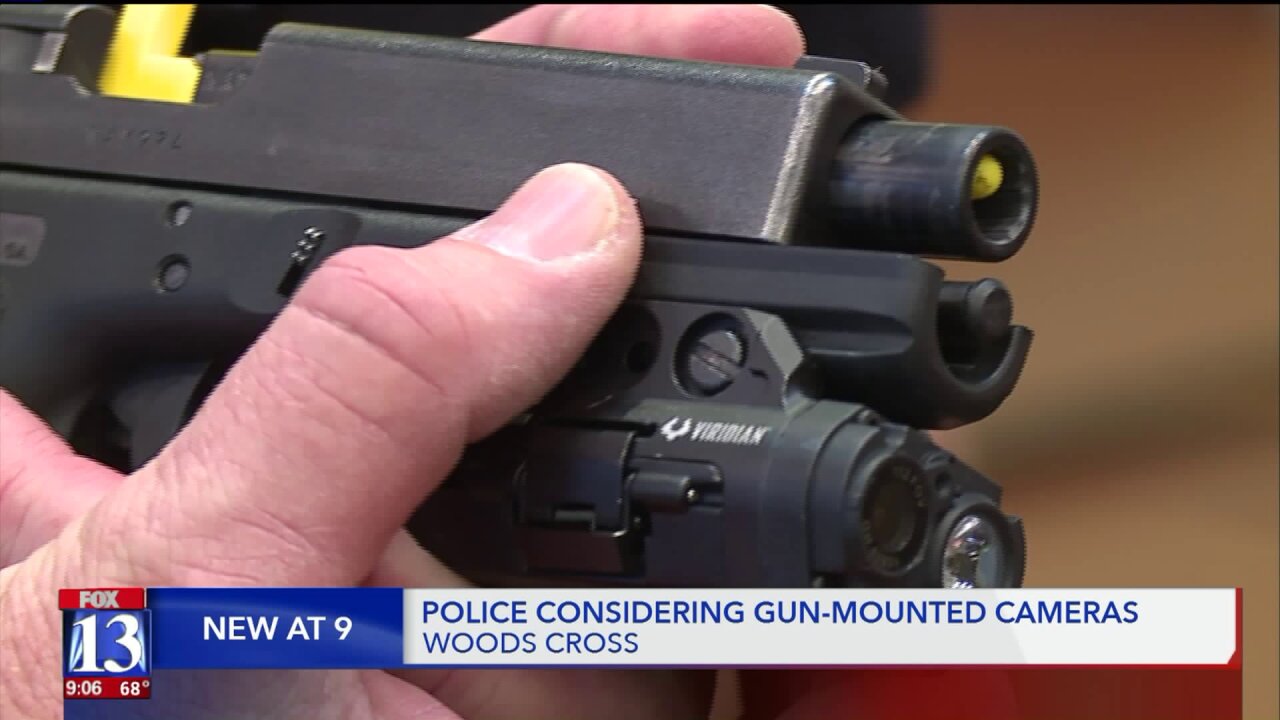 WOODS CROSS, Utah – The Woods Cross Police Department is trying out a new camera that would give them a unique view of high-stress situations, including officer-involved shootings.

It’s a camera that mounts on the officer’s gun, and turns on automatically when the officer draws their gun.

They’d be one of the first departments in Utah to implement this new technology, and they said it will help officers and the public.

Right now, all officers are equipped with body cameras.

Officer Jeremy Howey, who keeps his body cam clipped on his uniform front pocket, said he turns it on every time he’s contacting an individual.

“For when I’m talking to individuals, to hopefully capture more of their face and their hands,” he explained.

It works well for the most part, unless he has to draw his gun.

“It basically would only give me a side view of everything,” he said, adding that it’s not always pointed toward the person he’s interacting with or what’s going on in front of him.

The body cam from an officer-involved shooting in September shows mainly the officer’s arms and gun as he fires.

Footage released from an officer-involved shooting in early April, shows the arms of the officers and, in one case, the side of the officer’s head.

In that incident, only three of 10 Salt Lake City officers had their body cameras activated.

Woods Cross Police Chief Chad Soffe explained that’s because in a stressful situation like that, the officers were likely concentrating on stopping the perpetrator rather than activating body cam.

“I’m totally not faulting them, because they were in a stressful situation,” he said. “But if they had them on their guns, as soon as they pulled them out— they would have that footage.”

That’s part of why he wants to implement gun-mounted cameras in his department.

Chief Soffe’s gun already has one. As he demonstrated the camera on Thursday, he pointed it at a target on the wall. The footage from the gun camera gave a clear view of the target and everything around it.

“You get a better view of either the suspect, or whatever’s in front of the weapon at the time,” he said.

He said if he were wearing a body camera, you’d be seeing his forearm area and not what his gun is pointed at.

The gun camera doesn’t take up much as data storage as body cameras, because Chief Soffe explained it’s only recording when the gun is drawn.

The camera records sound. Chief Soffe said a test at the gun range showed that the video was clear, sound crisp and the camera quickly regains a good picture after the gun is fired.

While the gun camera isn’t meant to be a replacement for body cameras, the chief said it would provide a good supplement in gathering footage of an incident.

“We would continue to use our body cameras,” Chief Soffe said. “This would just give us another angle.”

Right now, he said the plan is to buy the gun cameras for new officers. They just hired an officer who Chief Soffe said will carry the gun-mounted camera.

Chief Soffe is expecting to give a presentation on the cameras to the Woods Cross City Council as they prepare their 2019-2020 budget, in hopes they will set aside money to outfit all officers and detectives in their department with gun cameras in the next year.