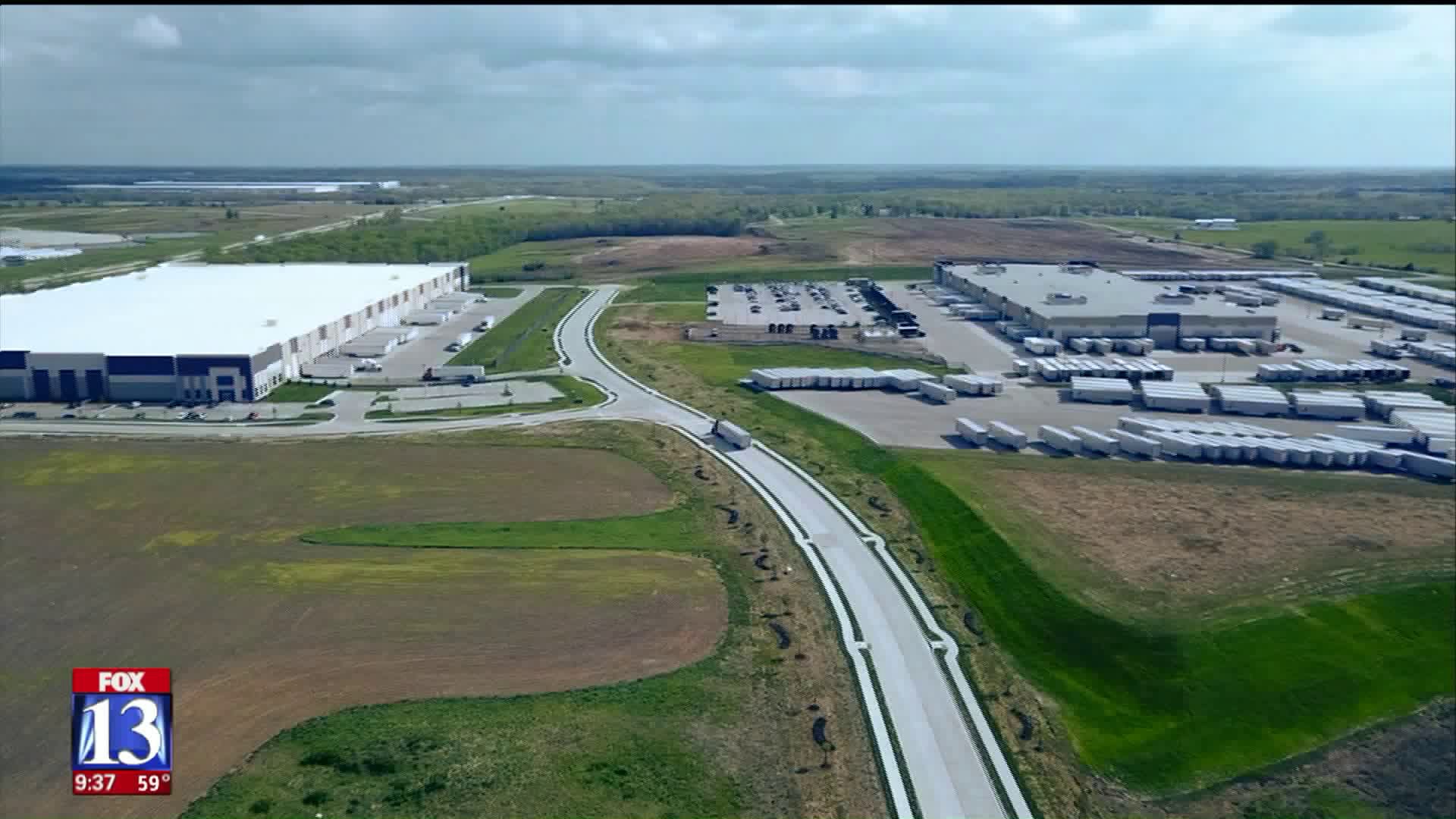 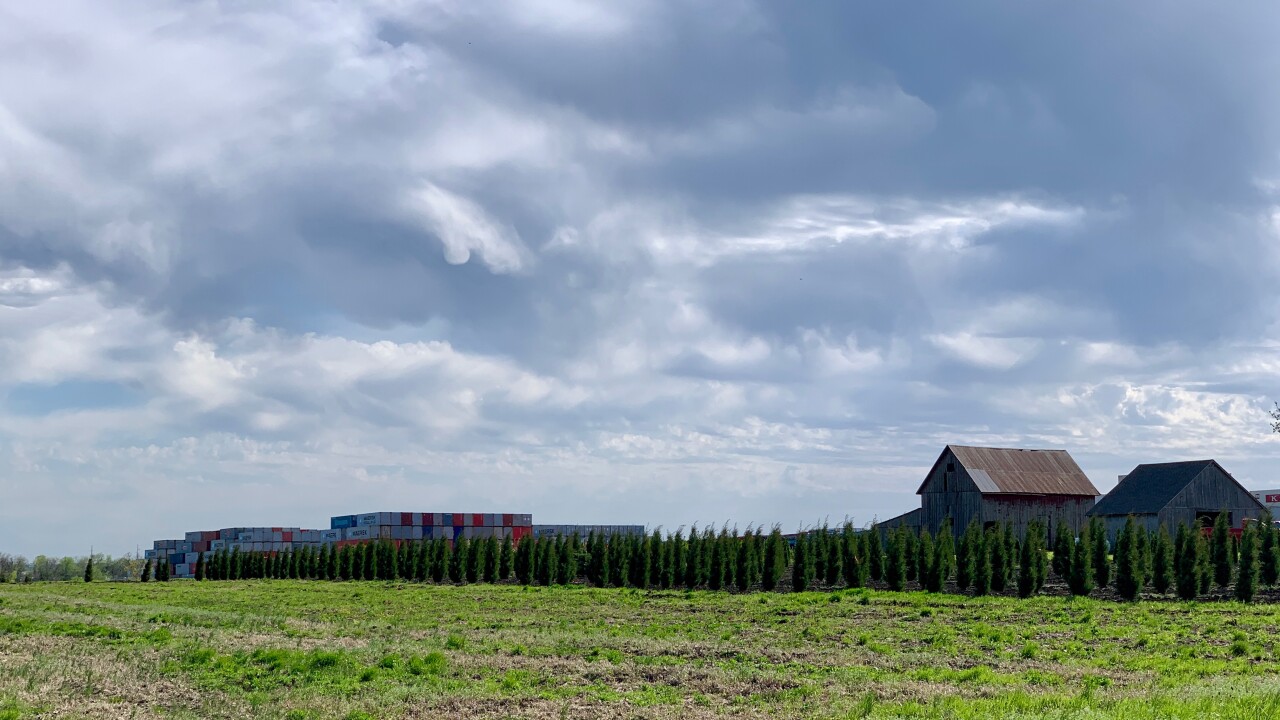 EDGERTON, Kansas – This tiny rural town is about an hour's drive outside Kansas City, where the urban landscape gives way to farmland.

While Salt Lake City's plans for an inland port is just a concept right now, Edgerton has had one up and running for years.

Shipping containers sit behind a barn near the inland port in Edgerton, Kansas. (Photo by Ben Winslow, FOX 13 News)

Containers filled with goods from overseas arrive in Edgerton from California via Burlington Northern Santa Fe's rail line. From there, the containers are dispersed to a series of massive warehouses that make up Logistics Park Kansas City.

From the sprawling network of warehouses, stuff is loaded onto semis and distributed across the Midwest.

Mayor Roberts showed FOX 13 around the inland port during a recent visit. The site is big, and growing bigger. When it opened six years ago, LPKC was projected within 15 years to be about seven million square feet and employ 3,000 people.

"We really bypassed that!" the mayor said.

Now, LPKC is roughly 12 million square feet in size and employs 4,200. That's more people than live in Edgerton, which is population 1,700.

"I always refer to LPKC as a city within a city," Oltman told FOX 13.

More than a billion has been invested by private companies in the inland port, including in infrastructure. As a result, Mayor Roberts said the boom has benefited Edgerton. The community was able to drop property taxes by about 25%.

"We did our first park project in 30-plus years," he said. "Maybe not big news to a city like Salt Lake, but we built our first Dollar General -- the first new retail construction in 40 years in our community. We paved 50% of our residential streets in the last two years, streets that were never paved."

The mayor argued the inland port also provides good-paying jobs for their part of Kansas, where many high school graduates don't go on to college. Starting wages range from $12-to-$18 per hour with benefits. Some companies offer as much as $28 per hour, he said.

Patrick Robinson, the vice-president of NorthPoint Development, which is building LPKC, said the project creates about 1,000 new jobs every year.  The project is moving so fast, they've started building warehouses on spec for companies that are anxious to move in.

He showed FOX 13 a 507,000 square-foot facility being prepared for a company that would be moved in within a month. Across I-35, Japanese farm and construction maker Kubota is building a million square foot facility, having outgrown two other buildings at LPKC.

"Our plans call for about 30 million square feet into the future," Robinson said of the inland port.

Edgerton got the inland port after the nearby town of Gardner said no. BNSF wanted to build a rail yard. Residents rallied to pressure political leaders to yank the project over concerns about traffic and pollution.

"We've thoughtfully considered all the feedback we've received and I think you'll see the development has responded appropriately," Robinson said.

Feedback included green space and berms that block nearby neighborhoods from seeing the warehouses, which are also set back from the roads. Semis have been limited to roads designed to handle the extra weight and told to stay out of neighborhoods. Shipping containers can't be stored just anywhere, but limited to designated yards.

"The facility runs really clean," Mayor Roberts said. "Have we increased local traffic? We have, but not really. We moved it from one part of the city to another."

There are a lot of trucks that move in and out of the inland port onto I-35, heading into the Midwest. In Jane Scaro's yard nearby, Eric Kirkendall with the environmental group Clean Air Now has set up an air pollution monitoring machine.

"We try to be the canary in the coal mine," he said as the machine buzzed softly nearby.

Kirkendall said it wasn't the trains or warehouses that were necessarily big polluters, but the semis.

"It's the trucks that are the polluters," he said.

Kirkendall, who moved after the inland port was built, said he does not believe Edgerton and developers have adequately addressed concerns about traffic and pollution.  He's gathering the data to see what the actual pollution impact of the inland port is on Edgerton.

"It grew really fast. Much faster than projected," he said. "Probably worse impact on traffic congestion and air pollution than we expected. We haven't measured the numbers yet, but I expect it's just a matter of physics: X trucks equals so much diesel exhaust and pollution."

Scaro has watched the inland port grow and move closer to her property. She fought it for years, even joining a lawsuit to stop it.

Since the port has arrived, Scaro acknowledged that while she doesn't necessarily like it – she doesn't hate it, either.

"It could be a lot worse, I suppose," she told FOX 13. "It's nice to be able to get on the interstate, it's closer. It's not nice to compete with UPS when they're releasing their delivery trucks for the day."

Scaro said she still has concerns about air quality and water pollution. But she believes residents did make a difference in what the inland port is like.

"We banded together and we were able to impact the development. Maybe not as much as we wanted to, but we still impacted the development," Scaro said. "It wasn't a lost cause."

Kirkendall agreed, saying that because of residents' involvement as the port was developed, everything had to be considered.

"The people in Salt Lake City ought to be looking along the same lines," he said of the pending inland port project in Utah.

Mayor Roberts said many of the original fears of Edgerton residents about LPKC never came to pass. He said they do listen to concerns about the inland port.

"Candidly, a lot of the complaints that were talked about here never came true," he said.

Robinson said there were some key differences between LPKC and what Utah officials envision in an inland port in Salt Lake City. For example, Kansas is flat and windy while Utah is grappling with worries about air pollution and wetlands.

"Given the limitations with the mountains in Salt Lake City, it's probably a different discussion here in Kansas," he said.

Robinson has visited Salt Lake City to meet with officials about the inland port project. He offered advice to state officials and residents:

"If I were to give one piece of advice, it's have a hearty discussion with the community about what you want your community to look like," he said. "In the near-term and beyond."