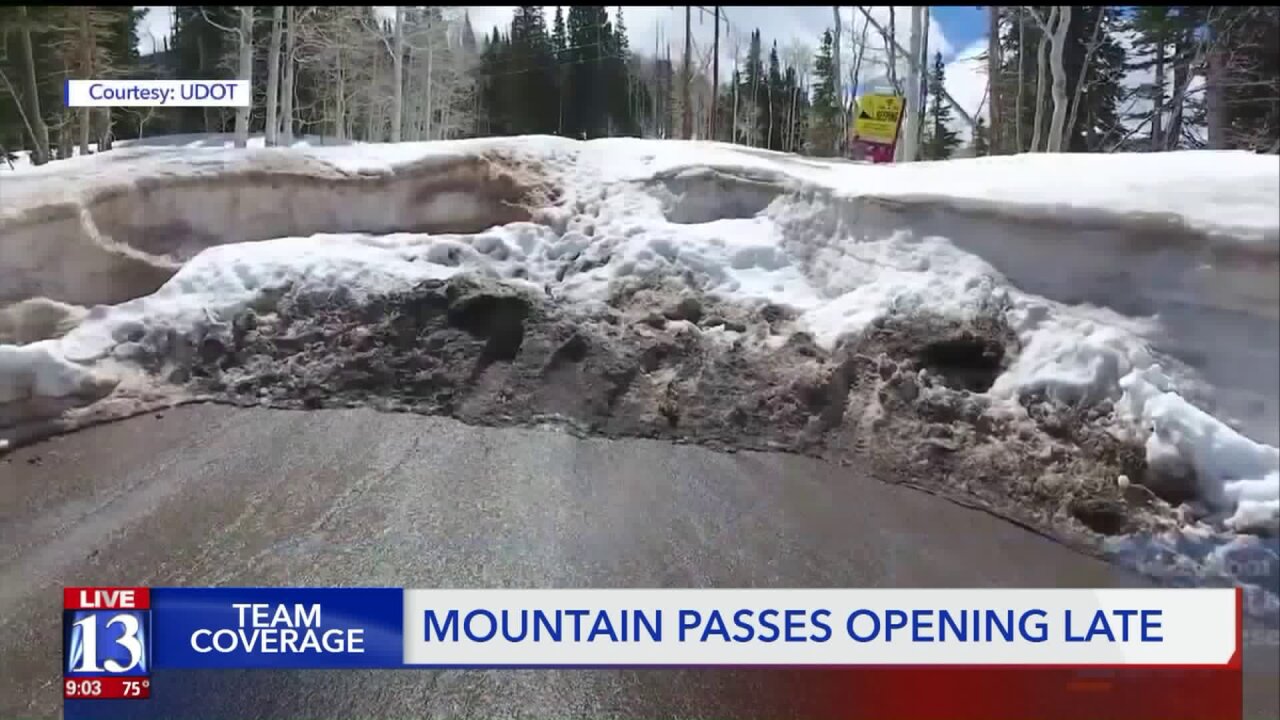 PARK CITY, Utah – Several scenic routes in northern Utah will stay closed through Memorial Day weekend, because the Utah Department of Transportation said there's still too much snow and not enough spring runoff.

Incoming storms this weekend are expected to add more snow to the mountains, contributing to the extended closures.

Even though the roads are clear at the Alpine Loop roadblock gates in American Fork Canyon, there's snow further up that UDOT has yet to plow.

People are beginning to head into the canyon for spring activities, but they have to turn around at the gate. Many drove up to Tibble Fork Reservoir Wednesday evening near the loop, for family pictures, a hike, to set up hammocks or stand-up paddleboard.

At one point, they stopped for pictures.

"Try not to fall in!" Jade said, as she snapped a photo of Emma and Lauren.

Others simply sat and took in the view.

"It smells so good," said Kayla Anderson, taking in a breath of fresh air. "Yeah it does!" echoed her younger sister Krystal.

They sat on the dock with their other sister Kaydrie, splashing their feet in the water.

"And freezing!" Krystal exclaimed. "My feet are falling off," Kayla said.

They acknowledged that it's definitely still chilly up there – and the further up you go, the colder and snowier it gets.

UDOT said they decided Monday to push back plowing in the Alpine Loop, because of snow and spring runoff.

The snow is deep and Gleason said they need to see more runoff in those areas, as well as wait until the runoff reaches a lower level.

He said safety is the primary concern in deciding when they can start plowing. Gleason said the National Forest Service will figure out when campgrounds can open.

All other areas in Utah County and south should be plowed on schedule and open before Memorial Day. He said they will start plowing those roads beginning next week.

They don’t have any tentative opening dates or plow dates for Alpine Loop, Guardsman Pass, Mirror Lake Highway or Monte Cristo. It could be possible those areas will open early June, Gleason indicated.

While they wait on Mother Nature, those who headed up to Tibble Fork Wednesday are not waiting.

"That is freezing cold" Kaydrie shrieked, as she submerged her feet in the water.

"It's not to the point where you can get used to it yet," Kayla said.

Even if the water is still cold, this is one of Kayla's last chances to visit the area for a while.

"I’m actually leaving on a mission," she said. "So we are trying to get all the canyon time we can get."