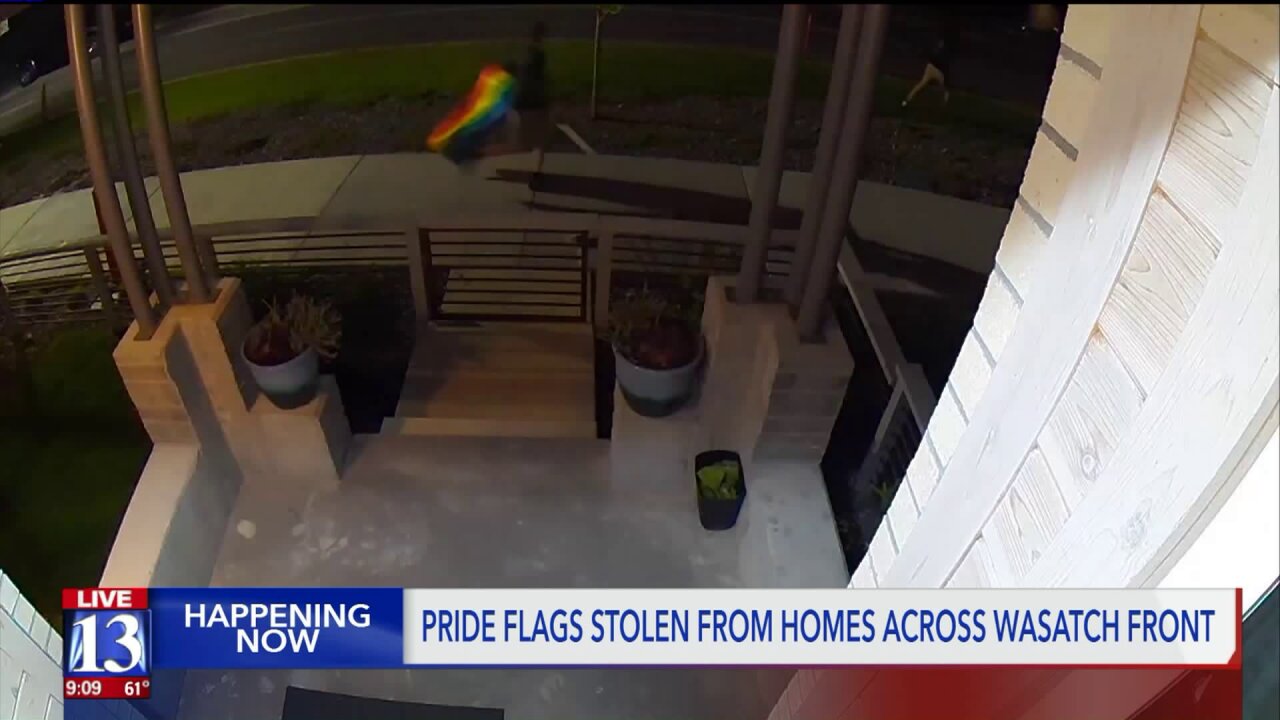 SALT LAKE COUNTY, Utah — Pride flags are being stolen and vandalized across the Wasatch Front during the first days of Pride Week.

Police can’t say for certain if the crimes are connected because they’re so spread out.

Five pride flags were taken from a single block in Daybreak.

Thompson’s flag was to show support for his gay family members as well as a neighbor’s son in transition. Last fall, a teen died by suicide near Thompson’s home after the teen’s family failed to accept his homosexuality.

“It is a visual cue that there is love for you. People will accept you,” Johnson said.

His security camera captured what looks like a teenage boy jumping over his fence, grabbing the flag and joining another boy carrying a neighbor’s flag.

“In a matter of seconds, they’re gone,” Johnson said.

Cameras also caught a Pride flag theft in Herriman. The homeowner wished to remain anonymous but sent pictures of the flag vandalized with spray paint.

Desi Wright’s flag was taken from her Saratoga Springs home.

“I went out on Monday to take a picture, and it was gone,” she said. “For me, that flag stands as love and equality an acceptance. It’s a positive sign for anyone that might see it."

The stolen flags were a fundraiser for Project Rainbow, which donates money to LGBT causes.

“It is an indication that this work is still important, and there are people out there that feel threatened for whatever reason,“ Project Rainbow founder Lucas Horns said.

Law enforcement urges parents to be on the lookout for rainbow flags that shouldn’t be in their child’s possession.

“If you are targeting a specific group of people, that’s a problem,” South Jordan Police Lt. Matt Pennington said. “We would call that a hate crime in Utah.”

As for motive, Thompson is aware it could be more than just teens causing a little trouble.

“There is a part of me that doesn’t want it to be some outward display of hate and disassociation for the LGBT community. I hope it’s just them being stupid,” Thompson said.

Victims of Pride flag theft are encouraged to report it to local police.