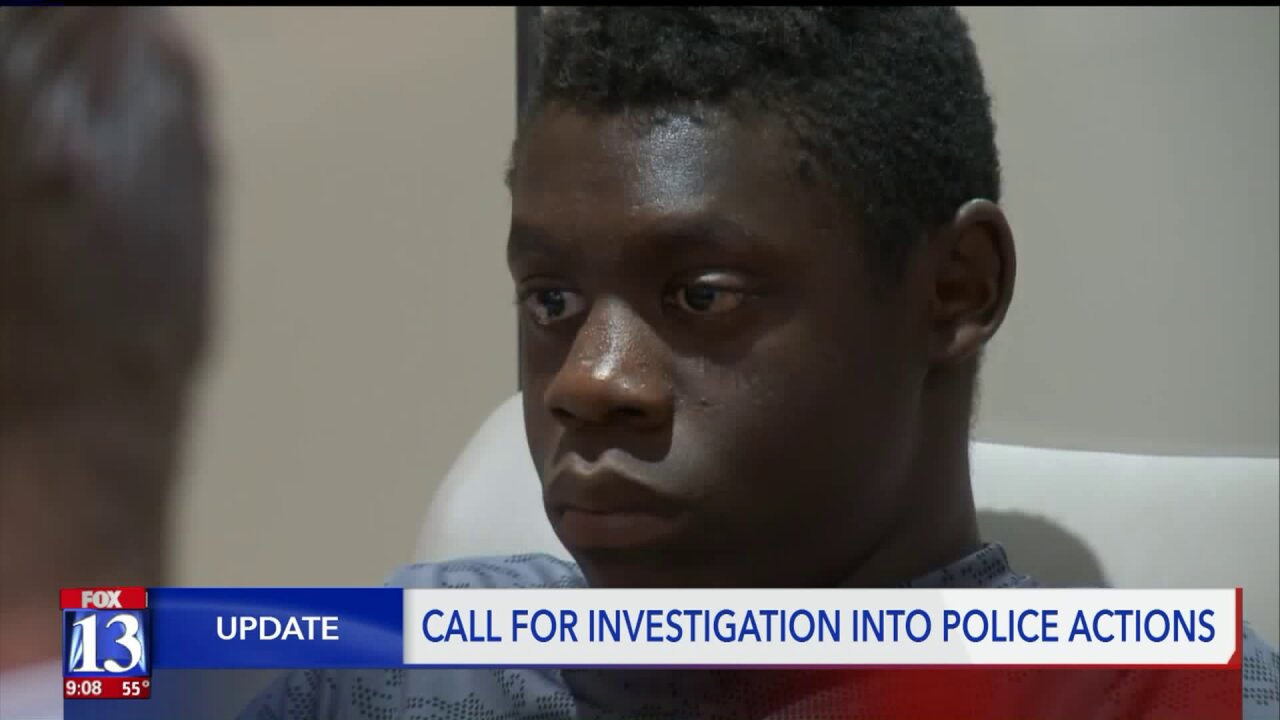 WEST BOUNTIFUL, Utah — Black Lives Matter has announced its support for a family, now demanding an investigation, after a police officer drew his weapon on a black 10-year-old while he was playing outside.

“I want an investigation, I want a formal complaint,” Jerri Hrubes said as she stood next to her attorney in a press conference Friday.

Just 24 hours prior, Hrubes was inside of her family’s West Bountiful home when she heard commotion outside.

“I heard and saw with my own eyes D.J. standing on the front lawn playing, with no toys in his hand, nothing in his hand, and an officer had a pistol pointed at his head,” she said.

Her 10-year-old son, D.J., said he was outside running around when the Woods Cross Police officer approached him.

“I was right here,” D.J. said Thursday as he showed Fox 13 where the incident happened. “And he pulled a gun out and I had to do this, and I laid down like this,” he continued as he put his arms behind his head and slowly dropped onto his stomach.

The officer was assisting another agency in a search for two suspects, believed to be armed, who were involved in a shooting incident in Centerville earlier that day.

Fox 13 was unable to reach Woods Cross Police Friday, but in an interview Thursday, they said it was simply a case of "unfortunate mistaken identity."

“We had minimal information at the time. We had one, possibly Hispanic, out on foot and we knew there was at least one other suspect involved," Woods Cross Police Lt. Adam Osoro told Fox 13 Thursday. "This kid was just in the area at the wrong time."

However, the family said if you take a look at this 4-foot 7-inch tall little boy, they believe it’s obvious the incident happened because of the color of his skin.

“I don’t know of any other black people in Woods Cross, it felt very racial,” she continued.

Now, in a public cry for answers and an investigation, other groups are supporting the Hrubes family's concerns.

“Had it been a white child playing on the lawn and the officers were on this manhunt, they would have yelled, ‘Go inside.’ They wouldn’t have drawn their gun on him,” said Josianne Petit with Black Lives Matter.

Petit said the organization wants much more than an investigation.

“To not have him be fired will not only embolden him, but other officers like him, and next time the outcome could be way worse,” Petit added.

Black Lives Matter said the incident as a whole sends a larger message.

And while the family waits to see what will happen next, Utah is no longer a place they want to call home.

“As a white mother to a black son, I don’t feel safe in West Bountiful anymore. That changed after yesterday,” Jerri said.

When Fox 13 spoke with Woods Cross Police Thursday, they said they did not have reason to look further into the incident. As mentioned, Fox 13 was unable to get in touch with the agency Friday to see if the family’s call to action would result in an investigation.