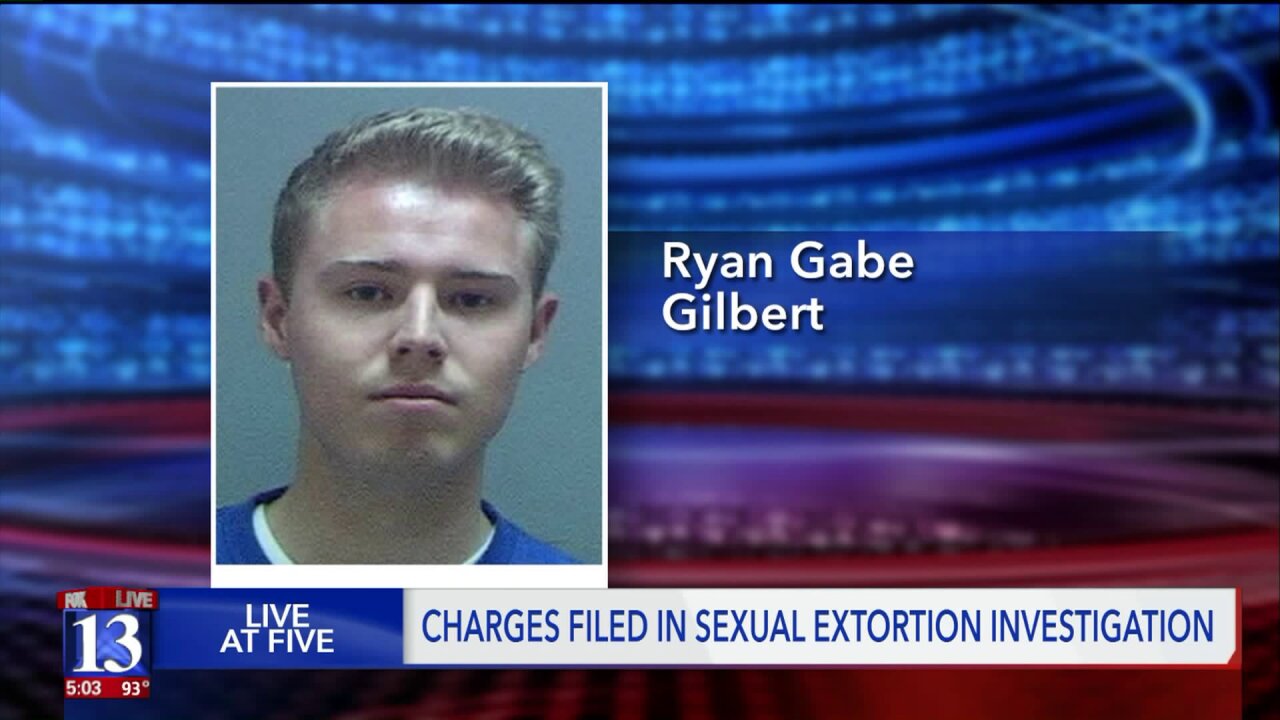 SOUTH JORDAN, Utah -- A Utah man has been charged with numerous felonies after authorities said he sexually extorted girls online, with more than 50 potential victims identified.

An agent with the Internet Crimes Against Children Task Force began an investigation into 19-year-old Gabe Ryan Gilbert in August of 2018 after receiving a report from Snapchat about a user who was extorting minors.

Gilbert was booked into jail this week after being sent home from a mission with The Church of Jesus Christ of Latter-day Saints.

A 15-year-old user reported that Snapchat user "Ethan Parker" threatened to Photoshop images of her face onto nude photos and "expose her" if she didn't send the man nude pictures of herself.

The girl laughed off his threats but reported the exchange to Snapchat, who reported it to ICAC.

"When I examined the results of the search warrant from Snapchat it was obvious the user had been engaging in very similar behavior with other underage girls," the agent wrote in the statement of probable cause. "I identified well over fifty (50) potential victims of this type of sexual extortion."

The charging document details numerous exchanges between the user and underage girls. In most cases the man threatened to Photoshop the girls' faces onto nude photos, but in some cases he made other threats of physical and sexual violence against the victims.

“It's very taxing on kids and it's very harmful for kids. We've seen an increase of suicide amongst kids that have had this happen to them because they feel so ashamed inside,” Farnsworth said.

In one case the man threatened to send "56 year old rapists or human traffickers" to her home if she didn't comply, and then he sent the girl screen shots of her exact location—including an image of her home.

He told another girl he would be, "posting your nudes all over the internet and sending them to creeps. So have fun."

Some of the victims complied with the demands to send photos or videos, while others did not.

“Generally, people's motives to do this type of crime, this sextortion, is pure sexual gratification. They want more and more images of child pornography,” Farnsworth said.

Police gathered digital evidence and showed the victims photos to identify the suspect as 19-year-old Gabe Ryan Gilbert, who was 17 at the time some of the exchanges and an adult at the time of some of the others.

When officers went to Gilbert's home in South Jordan, his family informed them he was in Mexico serving a mission for The Church of Jesus Christ of Latter-day Saints. There is no indication any of the messages were sent after the man left for that mission.

A few days later an attorney for the church contacted authorities to inform them a Mission President interviewed Gilbert after agents spoke with his family.

"What Gabe said was not disclosed, but he was immediately sent home," the document states of that interview.

When police went to Gilbert's home they were not able to make contact with him and said his family would not speak regarding his whereabouts. Authorities ultimately issued a warrant for Gilbert's arrest and he was booked into jail on a $500,000 bond.