SALT LAKE CITY — A heated protest at the Salt Lake Chamber Tuesday afternoon led to a handful of arrests, the closure of parts of two major streets just ahead of rush hour, the disruption of TRAX service and it brought business in the chamber building to a halt.

SLCPD spokesman Det. Greg Wilking said people who appeared to be protesting the planned inland port walked into the building and disrupted the office environment there, prompting officers to respond and disperse the crowd.

The protest, organized by several activist groups, started across the street at Washington Square. After speakers talked about their concerns with the proposed inland port project, the group moved across 400 South to the Salt Lake Chamber building.

"This is attacking our communities, communities on the west side and communities all over," protester Mariella Mendoza said.

A group of protesters locked themselves together with contraptions over their arms on the sixth floor, and sat on the ground. Eventually, police made a move.

"You guys have done your thing, you've been here, the floor is cleared out," a Salt Lake City Police officer said to the group. "There's no reason to go to jail for this. And, we're trying to be cool, give you guys a chance."

"Abort the port!" the group shouted, in response.

"Abort the port!" They continued to chant. Officers began to arrest people. Down in the lobby, protesters linked arms and shouted, "Stand up! Fight back!"

Backup arrived, and several officers walked into the lobby, as the crowd began to boo.

Officers asked people to leave, attempting to yell over the chanting. When protesters stood their ground, officers began to push. The group screamed and protesters pushed back.

Police struggled with protesters, but eventually corralled everyone and shoved them out of the doors. After shutting the doors to the building, protesters began to scream and bang their hands on the glass doors and windows of the entryway.

In the end, the protest moved back across to Washington Square, and eventually the group dispersed.

Eight people, five of whom were taken to jail, were arrested in Tuesday's protest on charges including trespassing, riot, assault and criminal mischief. The other three were issued citations and released.

The five who were booked into the Salt Lake County Jail are identified as: 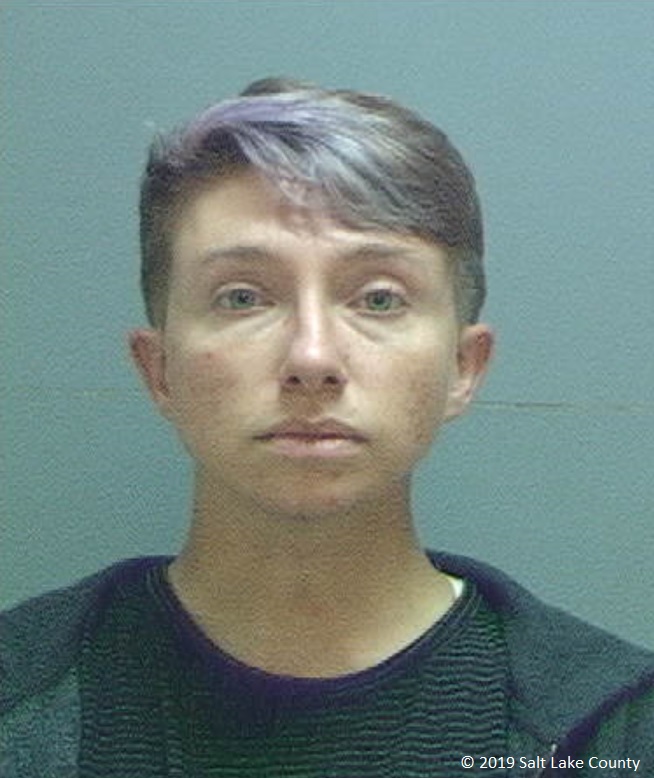 Detective Wilking explained police are often called out to protect peaceful protesters, but Tuesday's protest was disruptive and SLCPD's response was to use as little physical force as needed to disperse the crowd.

"We understand everyone's right to peacefully protest," Wilking said. "We often are in charge of protecting those rights. It's when people come in and disrupt office space, and the course of business, and then start destroying things, where we have to introduce ourselves to the situation to protect lives.

Wilking said some officers and protesters suffered minor injuries including scrapes, bumps and bruises during the clash. He also said they were investigating possible assaults against people on the periphery of the protest.

According to the Salt Lake Tribune, a photographer with KUTV "had his lens covered with a protester’s hand and, it appeared, was roughed up."

The Tribune also reported that reporters for the Tribune and Deseret News became trapped and were shoved around in the lobby during the protest.

"A Tribune reporter was pushed to the ground and briefly trampled but was uninjured," the Tribune article stated.

The inland port is a massive import-export center being planned for Salt Lake City’s west side. It would bring in goods from the coast, bypassing customs, to be distributed across the region. The plan, which takes up a third of the city, is controversial.

Opponents are concerned about the effects an inland port would have on the environment, particularly its effects on the already poor air quality situation along the Wasatch Front.

Karen Pickett with one of the protest organizing groups Earth First! said they chose the chamber because they believe Derek Miller, CEO of the Salt Lake Chamber of Commerce, "is taking money from corporations that would benefit from being part of this hub."

"If we can stop the permitting process from happening-- permits being given to corporations-- then we can stop this before it does the very clear damage that it will do," she said.

Miller later put out a statement that read, in part: “It is important to make it clear that there is no connection between the Salt Lake Chamber and the inland port project. The targeting of Chamber property and employees was senseless and outrageous."

“I have been assigned by the Governor to chair the inland port project," Miller said, in his statement. "I do so as a citizen volunteer. It is a responsibility independent of my duties as president and CEO of the Chamber and one that I take seriously."

Miller also wrote, “While a full assessment of the damage is not yet complete, I want to say that fortunately our staff is safe. No one has been physically injured in what can be characterized as an act of intimidation by people attempting to terrorize members of the Salt Lake Chamber family. I do express our sincere concern to other innocent victims caught in today's violence."

“Anti-Inland Port activists went way beyond the pale today when they stormed the Chamber of Commerce Building, attacked journalists, and terrified workers at the chamber.
This was more than just a protest; this was borderline terrorism. This was more than people just standing up for a cause they believe in; this was having no tolerance for a difference of opinion. This was bullying, intimidation, and violence, and will not be tolerated. I call upon all elected officials, all people of good will and character, and all running for the office of Salt Lake City Mayor to condemn today’s protests in the strongest terms.
I am grateful for the work of law enforcement officers who intervened in an effort to restore peace and order, and emphasize that while peaceful protest will always be welcomed in Utah as a means of free speech, violent protests and rioting have no place in our society.”