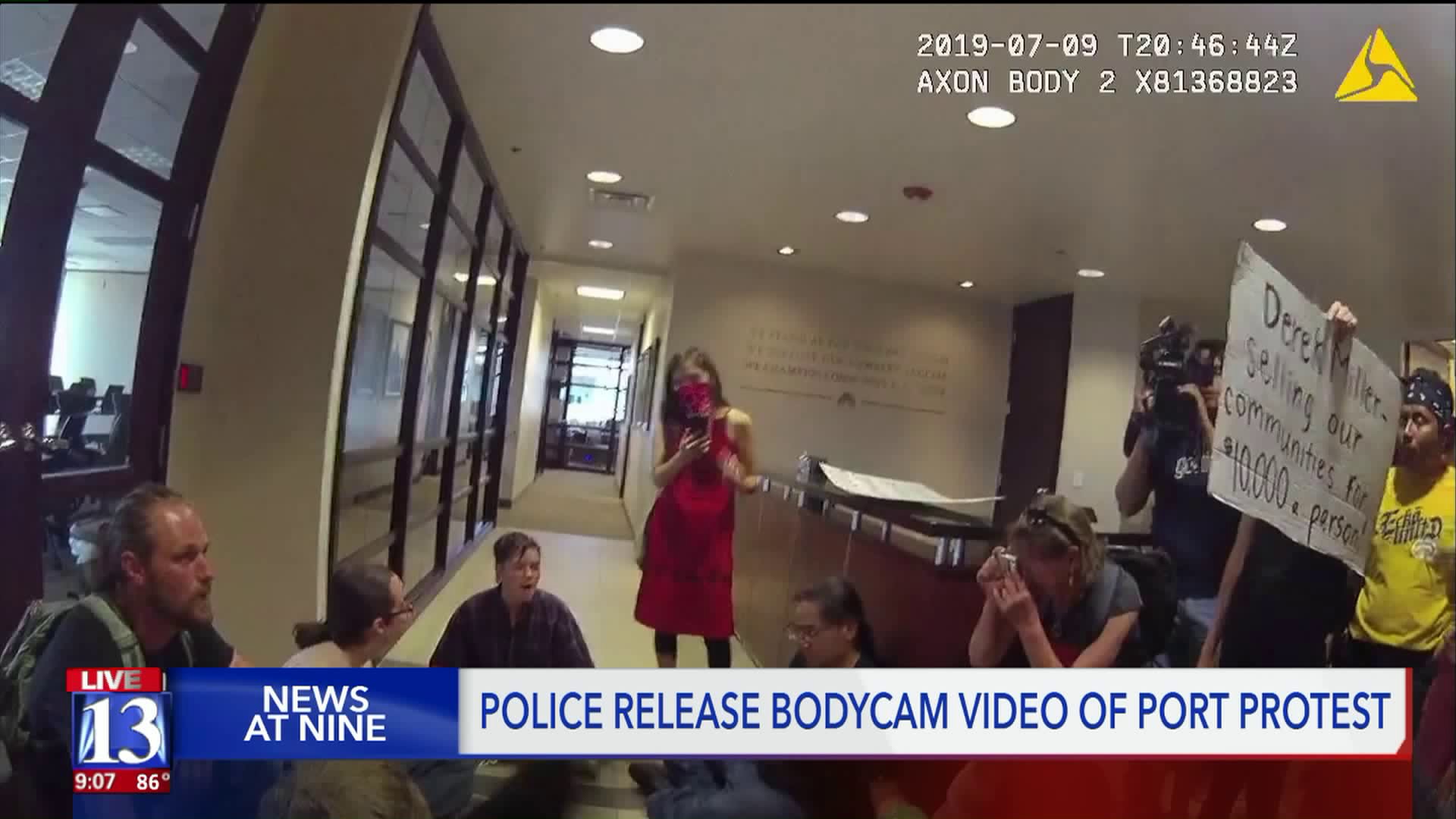 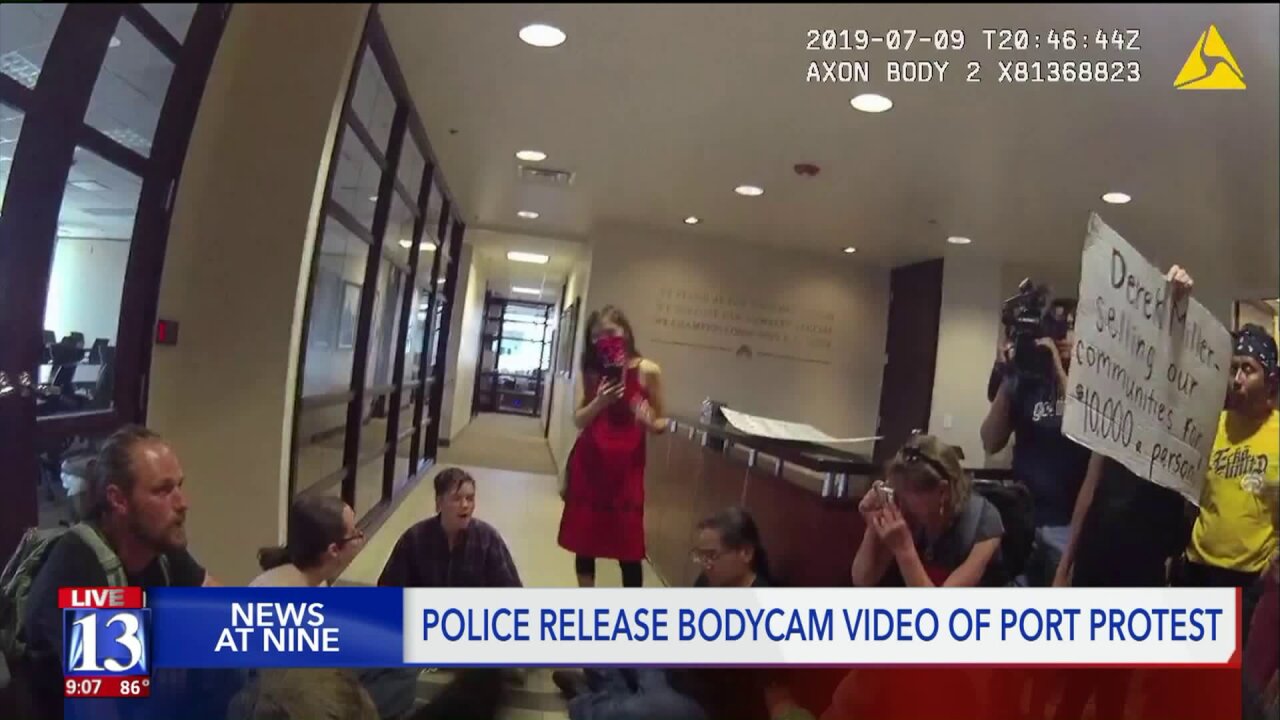 SALT LAKE CITY -- At a press conference Thursday, Salt Lake City Police said they’ve asked for an internal affairs audit and for the Citizen Review Board to look over how officers handled their response to a protest Tuesday over the controversial, proposed inland port.

Here is background information on the inland port project.

Police also released a 40-minute body camera video from one of the 75 officers who Chief Mike Brown said responded to the protest.

Fox 13 has released raw, unedited video of the protest taken by two photojournalists and a reporter.

The body camera footage covers what unfolded when officers responded to the sixth floor Salt Lake Chamber of Commerce office.

“That was private property, and they were given an order to leave and vacate at the direction of the property owner,” Chief Brown said.

In the body camera footage, officers arrive shortly after and a building employee speaks to an officer away from protesters.

"I'm all for protests, but they're in the wrong spot," the man says, to the officer.

All of the employees gathered in one corner of the building. At one point, the officers evacuate the employees.

“Let's go down, let's formulate a plan, and lets come back,” the officer suggests, to the three other Salt Lake City Police officers.

They agree they don’t have enough officers to approach the chanting group. They stand out of sight from the group, and wait.

"Our boss is asking, are we getting them out?” an employee asks the officer, as she speaks on a phone with someone. “They're jumping on our main reception desk, and they're trying to hit our cameras."

Eventually, a man and a woman from the protest group walk over to speak with officers, identifying themselves as communication liaisons.

“Everybody needs to leave, or else we're going to have to start arresting people,” the officer tells the liaisons.

“Okay, what we can do is communicate with that group,” the man says.

The officer goes on to explain that by law, the protesters are not allowed to be there. He explains the property owner wants them to leave. If they don’t, the officer tells the man that they can arrest protesters.

More officers arrive, and so do protesters.

The female communication liaison approaches officers again. They ask her if people understand that they’ll be arrested if they don’t leave.

“There's a group of people here who are prepared to stay until the end of the day,” the woman says.

“They then began to engage in conversation with those protesters, that they need to leave and disperse the building,” Chief Brown said. “Numerous times, we talked and had dialogue.”

The body camera and a Fox 13 photojournalist captured that interaction between the officer, as he spoke to the entire group of people.

"This is private property, and the people who own this property have told us to get everybody out, that includes you,” he says.

They yell at one man as they arrest him, saying he’s not complying.

Officers hold another woman on the ground.

“You're breaking my wrist!” the woman shouts.

As they arrest people who were linked together with chains, carabiners and duct-tape wrapped hard tubes, the group continues to sing and chant.

Down in the lobby, a scene of it’s own also played out between protesters and police.

Salt Lake City Police did not release body camera footage from that part of the protest and police response.

That’s where protesters said they believed police acted with violence and escalated the situation. Videos show officers pushing and shoving protesters, and in one case, appearing to hit or throw punches at a protester.

Protest organizers held a press conference Thursday morning to speak about why they felt police went too far, and drive home their message against the port.

“Our officers were spit on, scratched, kicked, punched, and had bottles and different items thrown at them,” Chief Brown said.

He said they had six officers document assaults.

“If they are going to engage in violent, destructive behavior, we're going to stop that behavior and hold people accountable,” he said.

Chief Brown said he’s asked for a criminal investigation for destruction of property and assault. He said they will use body camera and surveillance footage to help identify those who committed assaults so they can screen charges against those people.

He’s also asked for a review of how officers handled the situation, including an internal affairs audit to look at the actions of officers and “things that occurred.”

“Also doing an after action review of what occurred, so that we can look for best lessons learned or things that we can do in future,” Chief Brown said.

On top of that, Chief Brown said the Citizen Review Board will “take a look as well.”

When asked about the videos showing an officer punching protesters, Chief Brown said the internal affairs audit will look at the conduct and action of officers.

He said there’s 119 body camera downloads from the 75 officers who responded over the course of five hours. In total, he said 10 arrests were made—eight inside and two outside.

Chief Brown said 'after action review' will take about a week to complete, and he's not sure if that will become a public document.