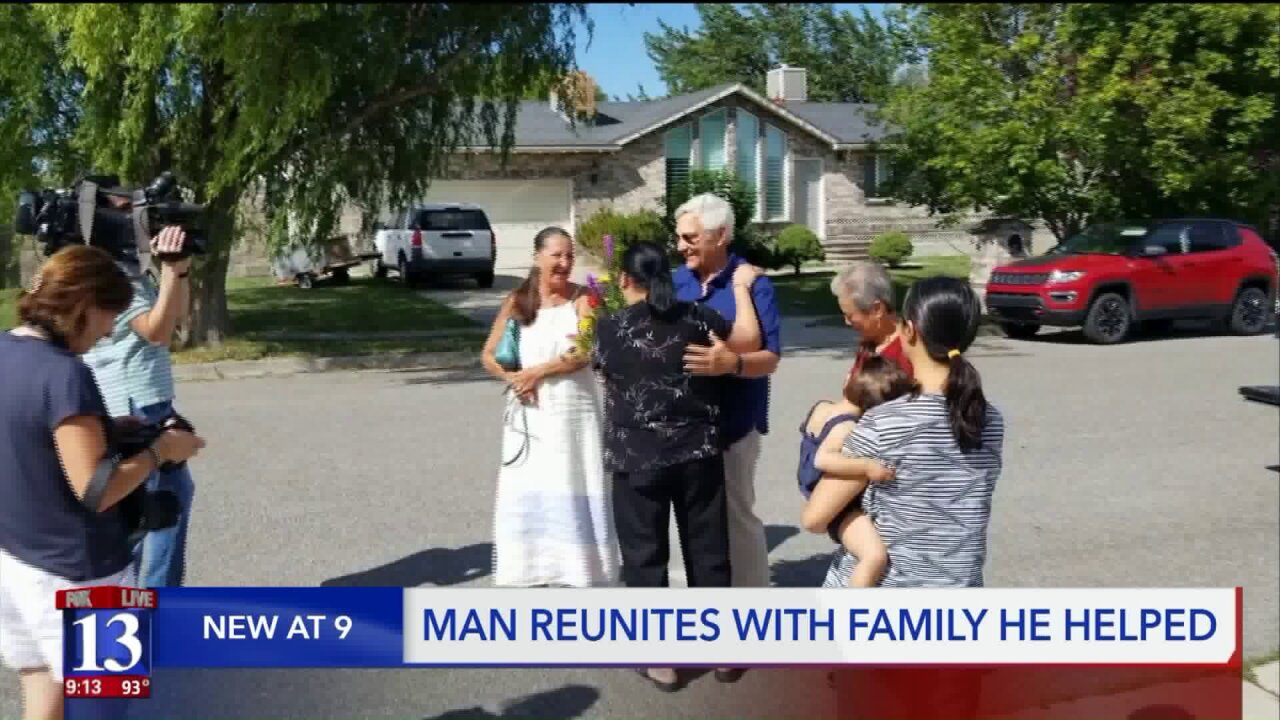 RIVERTON, Utah – For the first time since 1980, a Vietnam veteran who lived in Utah was reunited with the Vietnamese refugee family his family sponsored after the war ended.

“This is the very first time we had met after forty years,” Vietnam veteran Dave Hansen said.

Friday marked a reunion, decades in the making — and gave an answer to a mystery that no one thought could be solved.

“We always wondered what happened with Ha and Chau and their family,” Hansen said.

It started in Salt Lake City back in 1979 — the seemingly unlikely, but true, story of a Vietnam veteran who opened his Utah home to sponsor a Vietnamese refugee family.

“I did not want to even hear the word, ‘Vietnam’ after I got back, it was so traumatic,” Hansen explained.

Eight years passed after Dave returned from the war. He, his wife, Carol, and their two young children were living in a small adobe home in Salt Lake when a woman from their church group asked if they would be interested in sponsoring a family from Vietnam.

Hansen was attending the University of Utah at the time on the G.I. Bill, and his family was living off an income of $432 per month. Still, they decided they wanted to bring in a family.

“It’s hard, life was really hard, so I had a chance to escape Vietnam,” Chau Phung said.

So, Phung and her husband, Ha Tieu, moved to the United States – bringing along their young daughter and 5-month-old baby.

“It is really emotional when I talk about 40 years ago,” Phung said.

Hansen recalled months where the Phung’s family slept on the floor in front of their stove.

“He says we slept on the floor, but it’s that somebody opened the door, that’s all that mattered, and I’m thankful for that,” Phung said.

The two families lived together for months until Chau and her husband could secure jobs and get a house of their own.

“We spoke no Vietnamese at all, and they spoke no English at that time, but we really got along really well,” Hansen laughed.

The two families lost touch in 1980 when the Hansens moved out of state, but neither forgot.

“It was a wish from my mom several years ago that no one really took seriously because I think no one thought they could really pull it off,” said Chau’s daughter, Amy Tieu.

Then came 2019, that’s when Amy took to the internet to try and find the people who sponsored her mother and father.

Amy said her mother could only give her minimal information about them, she knew they were ‘Mr. and Mrs. Hansen,’ they had a son named Luke and a daughter named Rose. She also knew he graduated from the University of Utah in engineering in either 1978 or 1977.

“Reached out to a lot of random people, got a lot of ‘best wishes,’” Tieu said, describing how she used the University of Utah’s Alumni network to try and narrow down the options.

Amy stumbled across a ‘Dave Hansen’ while searching the online White Pages.

Hansen was thrilled when he found out.

“It was wonderful, like a bluebird landing in the yard you know? She said, ‘Are you the David Hansen who sponsored some Vietnamese people in 1979?’ It was emotional,” Hansen said.

“I was actually really stunned but elated that I had been able to find him after several years of being on the cusp of, 'Could we really find these people off of so little clues?'” Tieu said.

Forty years later, both families are still just as grateful for the other.

“Someone opened the door for us to get in, and I’m thankful for that,” Phung said.

“It was a blessing to us to have them come into our life,” Hansen said.

Now that they have been reunited, they say they will stay in touch.

The Hansens live in California now, and Chau’s family said the ocean is just a bonus.