Why Hong Kong is protesting 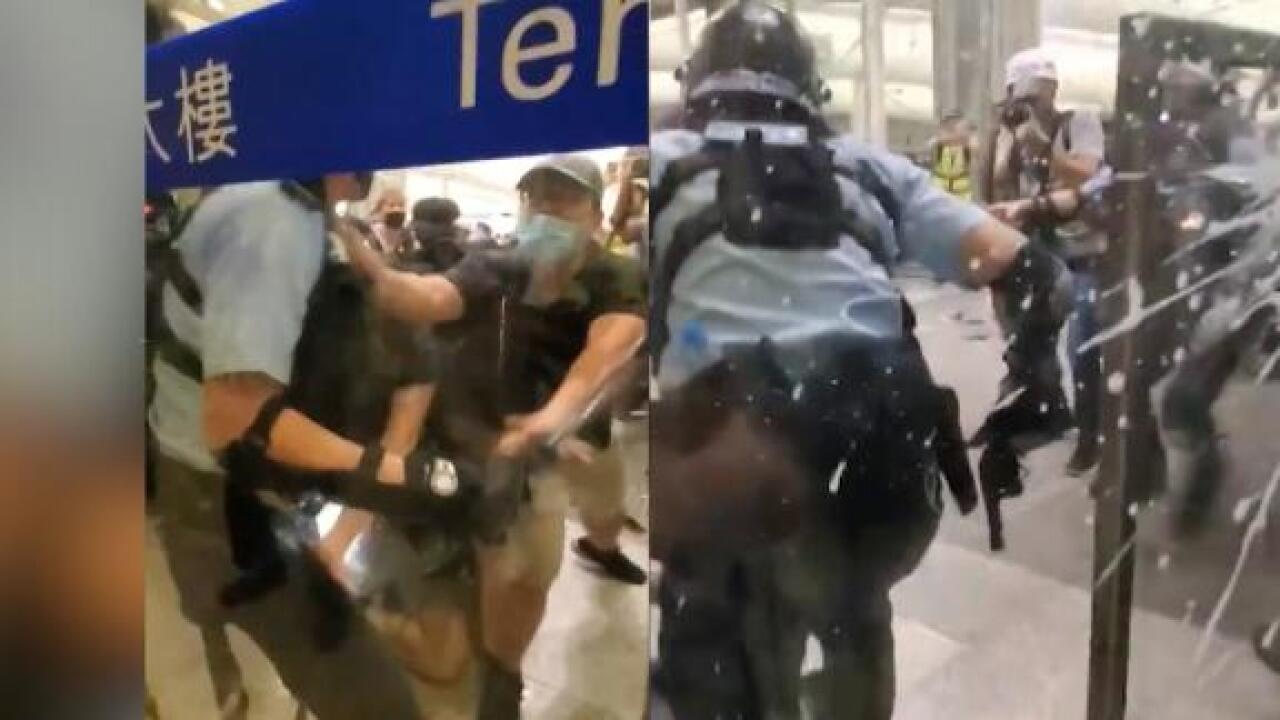 Hong Kong is facing a major political crisis as it heads into a 10th week of mass demonstrations. What started as a movement against a controversial law has expanded into something much bigger.

Over the past few months, the protest has evolved from millions of protesters marching through the streets, to groups of yellow-hatted demonstrators storming into government headquarters, and now shutting down the city’s international airport. While the majority of protestors have been peaceful, frustration is building on all sides.

Protestors are now demanding greater democracy and an inquiry into alleged police brutality during past demonstrations. Hong Kong’s billionaires are calling for order. And as unrest intensifies, Beijing’s tone is becoming increasingly heated.

Here’s what you need to know:

Hong Kong belongs to China, but it has its own currency, political system and cultural identity. Many Hong Kong residents don’t see themselves as Chinese, but rather as Hong Kongers.

That difference goes back generations; the city was a colony and territory of the United Kingdom for more than 150 years, until the British handed it back over to China in 1997. Today, Hong Kong’s legal system still mirrors the British model, prizing transparency and due process.

Hong Kong’s de-facto constitution, the Hong Kong Basic Law, enshrines this uniqueness. It guarantees freedoms that are unavailable to Chinese mainlanders, such as the right to protest, the right to a free press and freedom of speech.

One of the tenets in the Basic Law is that Hong Kong has the right to develop its own democracy, and previous Chinese officials pledged that the central government in Beijing wouldn’t interfere with that. But in recent years, Beijing has repeatedly reinterpreted the Basic Law — now it says it has “complete jurisdiction” over Hong Kong.

The Basic Law states that Hong Kong “shall safeguard the rights and freedoms of the residents” for 50 years after the handover. But many residents say mainland China is already starting to encroach on those rights.

This perceived threat to Hong Kong’s rule of law has led to the regular confrontations which has seen hundreds of protestors arrested so far.

Hong Kong’s summer of protest has seen all kinds: Massive peaceful marches; widespread strikes from different professional industries; and smaller group actions that have ended with clashes and vandalism, including putting up a banner in the seat of government that read “There’s no rioters, there’s only tyranny.”

The protests were sparked in July by widespread opposition to a now-shelved extradition bill, but have since expanded to demands for full democracy and police accountability.

Protestors have also been riled by recent allegations of police brutality. After a female protester was injured in the eye during clashes with police who were trying to disperse crowds, protesters at the airport on Mondaywore eyepatches in reference to the woman’s injury.

On the protest front lines, demonstrators have confronted police and been targeted by stick-wielding men in white, whom some accuse of collaborating with the government. But while many Hong Kongers have been inconvenienced by transport shutdowns and other travel disruptions, there is little sense of danger in the rest of the city.

Why are protesters targeting the airport?

Many activists have come to view Hong Kong’s international airport as something of a safe protest space away from the streets, where clashes between demonstrators and police have become commonplace.

But that might have changed Tuesday evening, after police made their first significant appearance at the airport since protests began there five days ago.

The airport, which is one of the busiest in Asia, has emerged as a key protest target as anti-government demonstrators looked to take their message directly to the international community.

At the airport over the weekend, leaflets in Chinese, English, French, Korean, Japanese and other languages were handed out to arriving international visitors, explaining the causes of the unrest — as protesters see it — and the demands of the opposition movement.

Showcasing the slick design that has characterized the protests, other pamphlets and posters also advertised planned demonstrations as “new tourist spots,” and advised tourists what to do if they were caught in the protests during their visit.

On Monday, almost 200 flights were canceled to and from Hong Kong. More were canceled on Tuesday as the shutdownwent into its second day.

What does this mean for Hong Kong’s economy?

While mainland China is Hong Kong’s most important trading partner, the city is an international business and financial hub, and the economy is already showing signs of hurting as a result of the protests.

Businesses in Hong Kong, both international and local, have also faced pressure and accusations of acting in concert or sympathizing with the protesters. Cathay Pacific, Hong Kong’s flagship carrier and a major local employer, has been ordered by Chinese aviation authorities to ban staff who take part in protests from traveling to China.

Cancelled flights are terrible news for companies operating in the financial hub. More than 74 million passengers traveled to and from the airport last year. It handles 1,100 passenger and cargo flights each day, and serves about 200 destinations around the world.

Experts worry that travelers will now avoid Hong Kong. “This is a disaster for Hong Kong that will cost tens of millions of dollars,” said Geoffrey Thomas, editor in chief and managing director of AirlineRatings.com, a website that monitors airlines.

What is the government saying?

Officials in both Hong Kong and Beijing are increasingly critical of the protests.

In a statement released early Wednesday morning, Hong Kong police denounced the “radical and violent acts by protestors” at the airport, and a government spokesperson described what happened at the airport as overstepping “the bottom line of a civilized society.”

In China, coverage of the protests has shifted from censorship to focus on clashes and disorder, with protestors labeled as “violent mobs” and “criminals.” On Monday, Yang Guang, a spokesman for the Hong Kong and Macao Affairs Office, China’s top body in charge of affairs in the city, said the protests showed “signs of terrorism” and suggested that they were the real threat to rule of law.

“Hong Kong’s radical demonstrators have repeatedly attacked police officers with extremely dangerous tools,” he said. “They have already constituted serious violent crimes and have begun to show signs of terrorism. This is a gross violation of the rule of law and social order in Hong Kong, which is endangering the lives and safety for Hong Kong citizens.”

The escalating rhetoric has sparked fears that China could be mulling an intervention of force.

In an interview with CNN, Max Baucus, former US ambassador to China, described the challenge that protestors posed to China’s central government.

“If Beijing thinks they can just jam a solution down the protesters’ throats, that’s not going to work, and I think they know that and trying to figure a way out,” he said.

“Don’t forget. China is very conservative. It’s hard for China to deal with matters like this — they are used to having their own way. This has been difficult for them. They’re not nimble. They don’t have a big diplomatic core like the United States does for example. This is tough for them.”

What are other countries saying?

US President Donald Trump called for calm on Twitter on Tuesday afternoon. He claimed that US intelligence showed “the Chinese Government is moving troops to the Border with Hong Kong. Everyone should be calm and safe!” China already regularly maintains a troop presence near the Hong Kong border.

“This should have been done in 1997 and is a wrong that needs correcting,” Tugendhat tweeted.

UK Foreign Secretary Dominic Raab says he is concerned by “what’s happening in Hong Kong and the worrying pictures of clashes between police and protesters at the airport” Tuesday.

“As I said to Carrie Lam during my call last week, we condemn the violence and encourage constructive dialogue to find a peaceful way forward,” Raab tweeted.