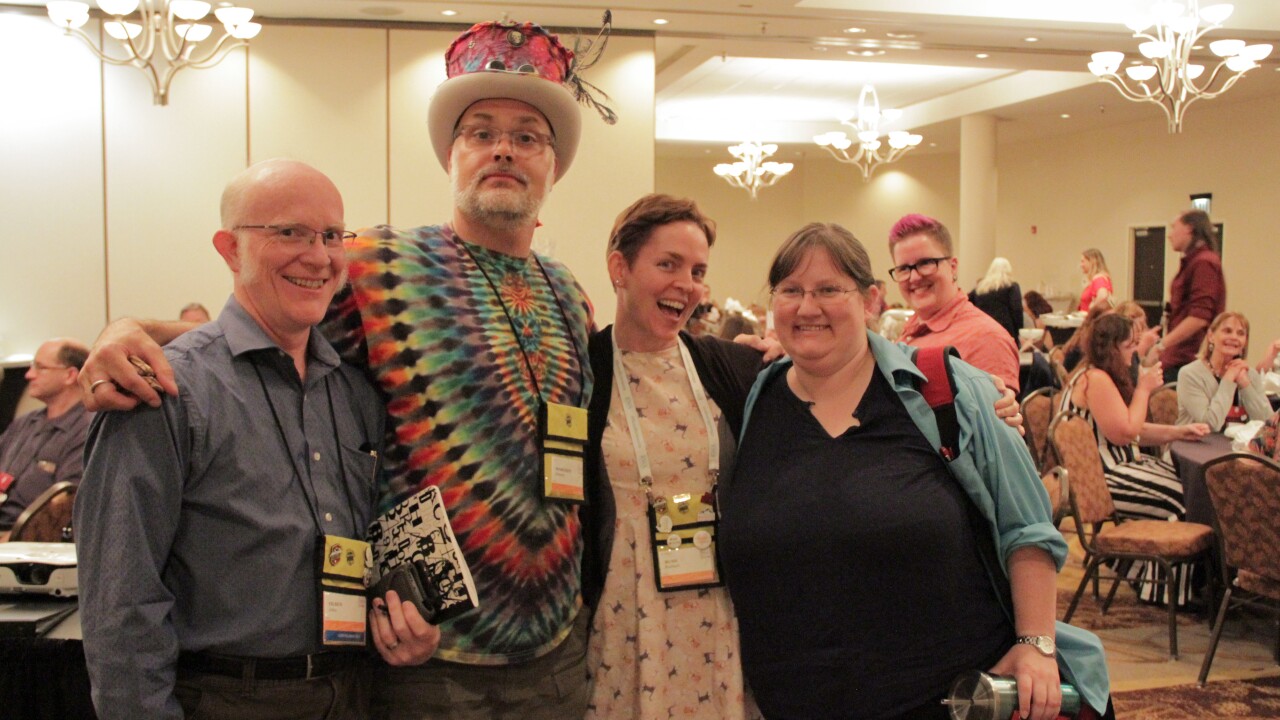 SALT LAKE CITY — The League of Utah Writers has been bringing wordsmiths together at their annual Quills Conference for 84 years.

“I don’t think anybody until this year was actually quite sure how long the conference had gone on…” said Bryan Young, a chapter president. “I was asked to write up something about the conference and asked the executive committee, ‘Well, how long have we been doing this?’ And they all sort of shrugged.”

He ultimately found the conference has been held annually since the league became active in 1935. Beginning as a chapter of the League of Western Writers, the group re-branded to the Utah moniker in 1939.

This year the league brought Michael Stackpole, known for the X-Wing novels in the Star Wars universe, and Anne Hillerman, whose series of mystery novels begins with “Spider Woman’s Daughter”, as keynote speakers.

Michelle Henrie of Farmington is one of the nearly 300 attendees who spent Friday and Saturday at Marriott University Park Hotel hoping to learn from their expertise.

So far she has attended six writing conferences in Utah this year,

“I am a writer and I wanted to be able to pitch to agents, so I have four pitch sessions planned for [Saturday],” she said.

Henrie has been going to writing conferences for about two years but said this is her first time at Quills.

“I’ve really been impressed with this conference because of the level of teaching that’s gone on,” she said. “I feel like it’s been a really diverse cast of people who are presenting and a really broad area of subjects that have been covered.”

Johnny Worthen, President of the League of Utah Writers, said that melting pot of expertise and experience is one of their primary goals.

“Right now one of our strengths is we’re intimate,” he said. “There are bigger conferences, but here we’re kind of limited to a certain number, which actually is a benefit. It allows you to meet that agent, have dinner with them, talk to them.”

Terra Luft, conference committee chair, said the ability to meet with the folks who can acquire manuscripts for publication or representation is a major draw for those who have completed a book.

She said for those still working on their project, the benefits include critiques from experts, networking, and support from others at their own level.

“Writing is hard,” she said. “You don’t have to do it alone. It’s easier to do it when you have friends.”

Worthen said the league consists of about 30 chapters in Utah, most of which are aligned by geography but some along genre lines.

Those chapters meet regularly to share work, give critiques and socialize. The Quills conference is the league’s largest event and is generally held in late August. A smaller one-day workshop is usually held in April, Luft said.

This year’s event featured those pitch sessions and live critiques as well as a variety of panels on everything from the structure of a story to considerations for building a cohesive magic system for your universe.

Stackpole said reading is critical to becoming a writer, but it takes more than that.

“You know if you want to be a sports star, one of the first things you learn are the rules of the game… so coming to conferences like this are great for that because you get to interact with other writers,” he said. “You get to listen to and benefit from stories of the mistakes that they’ve made, as well as the inspiration that they provide by their stories.”

He said one of the hardest parts of breaking into the industry is handling rejection and continuing to write even when you don’t feel motivated.

“Writing does take a certain amount of life experience,” he said. “One of the kind of bittersweet things that you’ll see at conferences like this is you might have a kid who is a very talented writer, who is 14 years old, but they’ve never been in love. So they are never going to be able to write a romance or a love story.”

He said research can help fill in those gaps, saying his preparation for the X-Wing novels was comprehensive enough pilots would often ask him what he flies.

Stackpole said many people stop writing because it gets too hard, both in terms of finishing the stories and in their personal lives, but the key is to keep going.

That’s something Henrie says she tries to focus on as she moves closer to her goal.

“I am on the cusp of being published: I believe it,” she said. “If you don’t believe in yourself, no one will. You’ve got to, and you’ve got to stay positive.”

Worthen said he looks forward to growing the event for 2020.

“Next year is our 85th anniversary so there is going to be a party of some kind,” he said.