A man who killed a police dog was sentenced to at least 11 years behind bars. 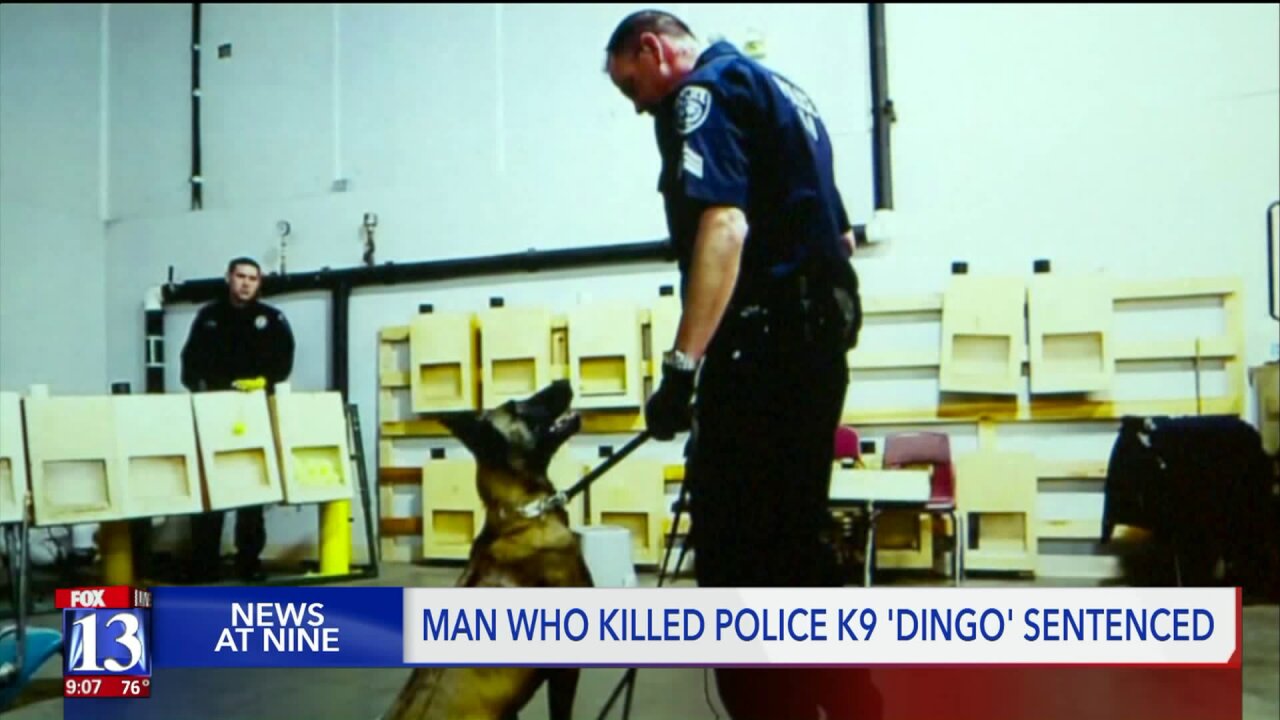 SALT LAKE CITY — A man convicted of killing a Unified Police K-9 will spend more than a decade behind bars.

In April, Torey Chase Massey was found guilty on five counts, including possession of a dangerous weapon by a restricted person and death of a police service animal.

On Monday, Massey was sentenced to 1 to 10 years for the killing of Unified Police dog K-9 ‘Dingo’ while he was being chased by officers on July 6, 2017.

He also was given 5 years to life sentences for two other first-degree felonies. The sentences are to run consecutively, meaning Massey will spend at least 11 years behind bars at the Utah State Prison.

Before District Court Judge Paul Parker delivered the sentence, Chad Reyes, the dog’s handler, delivered impassioned remarks to the court while asking the judge to give the most severe sentence.

“Torey Massey must understand some of his days in prison are being served solely for taking the life of my best friend,” Reyes said in his victim statement. “No matter what the difficulty in my life, Dingo had the amazing ability to fill my soul.”

Reyes worked with Dingo for five years, building a strong bond. He believes his dog died a hero and saved his life. He recounted the painful memories of losing his partner while chasing Massey.

“Hearing the gunshots, then feeling the extreme panic,” Reyes said. “Having Dingo rush to my side with his mouth wide open as he was desperately trying to draw breath.”

Trying to hold back tears, Reyes added, “The overwhelming grief that consumed me when I saw Dingo slip into unconsciousness while I was holding his blood soaked body in my arms.”

Massey’s lawyer described his client as someone who has battled mental health issues his entire life and asked the judge to show mercy.

“I understand I've got to pay for what I did. Although, I would like to apologize to Chad Reyes. I took his friend, his partner,” Massey said before the sentence was read.

Outside the courtroom, Reyes expressed relief that this process finally ended. He was not ready to accept Massey’s apology.

“I feel his apology was very feigned and just another way to get him something for himself,” Reyes said.

He hopes this severe punishment will send a message that K-9 officers should be respected as valuable members of law enforcement who devote their lives to keeping the public safe.

“They are invaluable creatures and irreplaceable,” Reyes said.

Dingo’s death inspired the Utah legislature to pass a bill that increases the penalty for killing a law enforcement service animal. Gov. Gary Herbert signed the bill into law in March 2018.

Reyes is now an advocate for this legislation. He said Florida passed a similar law and Missouri and Illinois are looking to do the same.