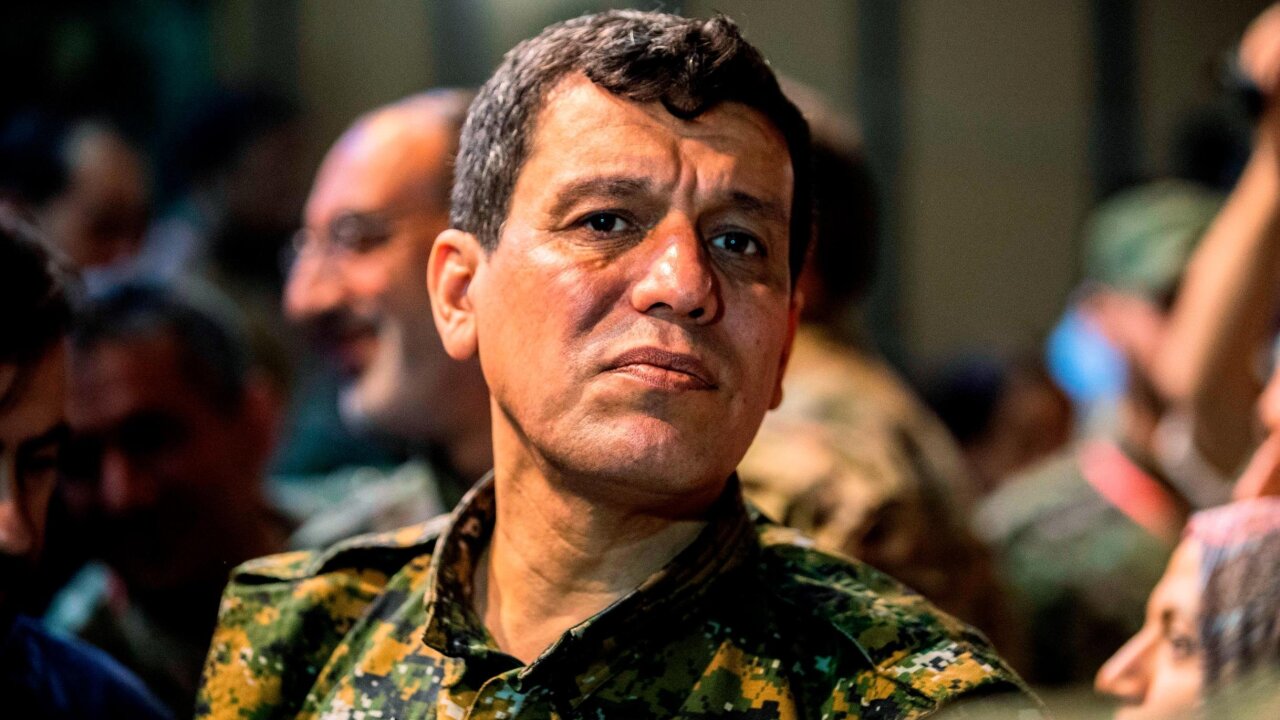 Gen. Mazloum Kobani Abdi, commander-in-chief of the Syrian Democratic Forces (SDF), attends a meeting with other commanders and representatives of the US-led coalition fighting ISIS.

America’s top ally in the fight against ISIS, the commander of the Kurdish-led Syrian Democratic Forces, warned Friday that the terrorist group was resurging in Syria and asked for increased US support for his troops as they seek to keep ISIS from reestablishing itself.

Asked if he agreed with a recent Pentagon inspector general report that said ISIS was resurging in Syria after President Donald Trump’s decision to withdraw about half the US troops from the country, Gen. Mazloum Kobani Abdi, the Syrian Democratic Forces commander, told CNN that “this is our opinion as well.”

While US Defense Secretary Mark Esper recently said the terror group was not resurging in Syria, Mazloum told CNN in an exclusive interview that ISIS had prepared for its transformation into an insurgency even before it lost its last territorial holdings in the country.

Speaking through an interpreter, Mazloum said ISIS’ new insurgency was enabled because the group had some freedom of movement in areas bordering the region of Syria that the Syrian Democratic Forces control, including across the border in Iraq and places west of the Euphrates River that are ostensibly controlled by the regime of Syrian President Bashar al-Assad, which the SDF has stayed independent of.

The situation in Syria remains complex, while the Russia and Iran-backed Assad regime is poised to recapture much of the country’s west from various rebel groups, east of the Euphrates River the Kurdish-led SDF, which operates totally independent of the Assad regime and is backed by a US-led military coalition comprised of mostly European allies, largely retains control.

The SDF consists of about 35,000 personnel, including Kurdish and Arab fighters. Backed by thousands of US airstrikes and military advisers, the group played the lead role in driving ISIS from cities and towns across Syria, a campaign that saw ISIS lose its last territorial holdings in March.

Asked if Trump’s decision to reduce the number of US troops in Syria from a peak of nearly 3,000 to fewer than half of that today had impacted his forces’ ability to combat ISIS, Mazloum answered, “Of course this is impacting us negatively.”

“We and the coalition and the Americans, we were very effective,” he said. He added that some of the remaining US troops in Syria are busy manning observation posts along the Syria-Turkish border and are therefore less involved in combating the remnants of ISIS.

Mazloum said the US should honor its commitments to his group and the ISIS fight. “If Americans are not being seen as obeying their commitments,” he said, it would be “not just harmful for us but harmful for the Americans as well.”

One area of particular concern for both the commander and US officials is the ability of the Syrian Democratic Forces to continue to guard tens of thousands of detained ISIS fighters and ISIS family members, including more than 2,000 foreign terrorist fighters from some 50 countries in makeshift camps and detention facilities.

“We are still holding them in very tough conditions,” Mazloum said, adding that the SDF has a “very limited capability.”

The SDF also has a security presence at the spiraling Al Hol internally displaced persons camp, which has swelled to some 70,000 inhabitants after the collapse of the ISIS caliphate.

Mazloum called the Al Hol camp a “time bomb,” saying they have received inadequate assistance from the international community in dealing with the situation and that some countries had agreed to repatriate their citizens but had not followed through.

“I describe it as a petri dish for future extremism in these camps and in these detention facilities. Addressing these people, to include the detainees, is, in my view, a critical strategic issue,” the chairman of the Joint Chiefs of Staff, Gen. Joseph Dunford, told an audience in Washington on Thursday.

The Trump administration has long sought to have countries repatriate their citizens who went to Syria to fight for ISIS and prosecute them but has had limited success, and their continued detention in Syria has caused concern.

“It’s an untenable situation,” Esper said this week while traveling in the UK, when asked about the foreign fighter issue.

“Our view has been that they should be repatriated and dealt with, dealt with appropriately. So that’s the message, otherwise there, it’s a risk to the region, right? I mean how long can we — they — be guarding these camps by others and, and you’re talking about several thousand, several thousand fighters total, but there’s a little bit over 2,000 foreign fighters, many of which come from Europe,” Esper added.

Mazloum said he either wanted to see countries repatriate their citizens or for an international court to be established in northeast Syria that could prosecute the fighters.

ISIS’s ‘significant presence’ in the region

Senior US officials have acknowledged that ISIS remains a threat but have stressed that the terror group is nowhere near as powerful as it was several years ago, when it controlled vast swaths of Iraq and Syria and sought to direct external operations around the world.

“I think it’s fair to say that they still have a significant presence in Iraq and Syria. They’re certainly nowhere near as strong as they were in 2017 and 2018, so they have been significantly degraded, again still maintain the ability to conduct insurgent, guerrilla-style operations and that’s what they see today,” Dunford said Thursday.

Mazloum said he would like to see the US help create political solutions for the areas that have been liberated from ISIS as well as provide increased military backing for the SDF, including financial support and additional equipment.

Dunford also said the SDF would require continued US and coalition support, saying, “I do believe that in the current environment, the Syrian Democratic Forces … continue to need the support of the coalition to be effective in dealing with the residual ISIS presence, but as importantly training local forces to secure that territory that has been cleared by ISIS previously. So there’s still work to be done, and we estimate some 50-60,000 local security forces in total would need to be trained to hold that ground, and we’re probably some 50% of the way through.”

Last week the US-led coalition said that in the last four months its “SDF partners detained more than 225 Daesh fighters,” in Syria, using an Arabic name for ISIS. The coalition called the SDF “capable & reliable partners that suffered thousands of casualties in the fight against Daesh,” adding that they “are maintaining stability & keeping Daesh from re-emerging” in northeast Syria.

But Mazloum’s biggest concern appears to be the the prospect of a military offensive by Turkey into northeast Syria, something that Turkish President Recep Tayyip Erdogan has repeatedly threatened and has also sparked concern among US officials.

“Is there a possibility — you’ve heard the political rhetoric — that Turkey could move into northeast Syria? There is that possibility. I don’t believe that that would be helpful to our mutual interests, and I think that’s why we’re so focused on finding an acceptable way to address Turkey’s concerns and at the same time maintain campaign continuity against ISIS in northeast Syria,” Dunford said Thursday.

The US and Turkey have been working on an initiative the US labels “a security mechanism” and that Turkey calls a safe zone along the Turkish border in northeast Syria, which Turkey says is needed to stop Kurdish PKK terrorists in Syria from attacking Turkey.

As part of the initiative, the US and Turkish militaries have established a joint operations center and have conducted a series of helicopter reconnaissance flights over the area. Joint ground patrols are expected to begin shortly.

The Turkish government sees the PKK as intrinsically linked to the Kurdish elements of the SDF, something Mazloum strongly denies, saying there is “no connection between the SDF and the PKK” and that the SDF is not part of the fight with Turkey.

The US also sees the SDF as separate from the PKK but acknowledges Turkey’s security concerns in northeast Syria and considers the PKK to be a terrorist group.

Mazloum says the Turkish threats of an incursion have helped ISIS sleeper cells in northeast Syria, which he says will try to exploit any attack on the SDF. But he says he trusts the US to reach a deal with Turkey to avoid such a conflict, saying that with regard to the safe zone “so far it’s going well.”

Mazloum said his forces had agreed to a safe zone along the Turkish border averaging 5 kilometers (3 miles) in depth, with some sections extending to 12 kilometers (about 7 1/2 miles).

“We have shown a lot of flexibility from our side,” he said, adding that he was “confident that the Americans are going to be responsive to this flexibility” while saying that Turkey was making “provocative statements every day. This is making this process hard.”

US Central Command, which oversees US forces in the Middle East, has released images of what it says is SDF units removing fortifications from areas that fall within the safe zone.

But if the arrangement with Turkey were to collapse and the US were to abandon Syria, Mazloum made it clear that the SDF would much rather strike a deal with the Assad regime and Russia than live under Turkish occupation.

He called such a deal with the regime and Moscow a “bad solution” but said it is “the less bad solution.”

Asked if he could send a message to Trump or leaders in Congress, Mazloum said he would ask them to support “Kurdish rights within Syria,” acknowledging their role in the fight against ISIS.