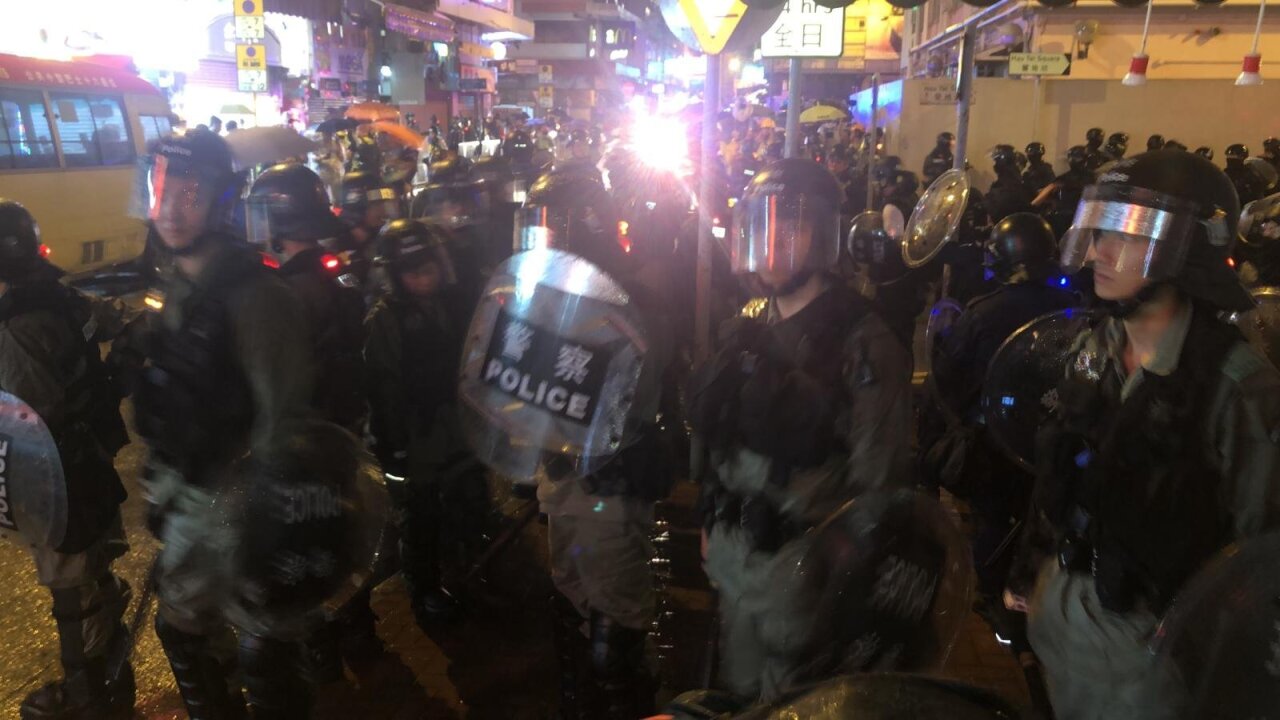 Hong Kong has entered its 16th consecutive weekend of anti-government protests, as police warned the level of violence is escalating potentially beyond control, and the force faced renewed allegations of brutality.

What began as a peaceful march in the city’s suburban Tuen Mun district on Saturday, turned in a violent standoff between a group of protesters and riot police.

They warned demonstrators to “stop illegal acts” and to leave the area, firing teargas on protesters who built makeshift barricades and threw petrol bombs.

At a background briefing for foreign media Friday, a senior Hong Kong police commander said officers were concerned that the level of physical force was reaching a point where they might be forced to use live ammunition to defend themselves or others.

“Our officers are worried that the level of violence has got to such a level that they might have to kill someone or be killed themselves,” the commander said. “We have been so restrained but in the face of such violence this pressure has become extremely dangerous.”

On multiple occasions in previous weeks, police officers have pulled sidearms or fired their weapons in the air during confrontations with protesters, in circumstances they said were life threatening.

During the briefing, police showed reporters a several minute compilation video — with the filename “torture” — of acts of violence by protesters against bystanders.

“We could be here watching these video clips until the end of the month if we wanted to,” the senior commander said.

Police are facing renewed accusations of brutality themselves this week, after Amnesty International released a report detailing what it said were instances of torture and abuse in custody.

“Hong Kong’s security forces have engaged in a disturbing pattern of reckless and unlawful tactics against people during the protests,” the human rights group said, adding that one man claimed police “beat him severely and threatened to break his hands if he tried to protect himself,” while another officer “threatened to electrocute a man’s genitals” if he would not unlock his phone.

More than 1,300 people have been arrested since protests began in June. The Amnesty report, which is based on interviews with 38 people, including lawyers, medical professionals and 21 arrested protesters, found that in more than 85% of cases investigated (18 out of 21), the arrested person was hospitalized.

“Time and again, police officers meted out violence prior to and during arrests, even when the individual had been restrained or detained. The use of force was therefore clearly excessive, violating international human rights law,” said Nicholas Bequelin, East Asia Director at Amnesty International.

In response, police said they have always respected the rights of those in custody and said there were existing complaint mechanisms in place to report alleged abuses.

The senior police commander dismissed the Amnesty report as “not credible.” They echoed the official remarks, adding that “in any prolonged situation of this nature, I would be dishonest if I tell you I believe that no one has overstepped the line.”

“You are talking about a prolonged situation where there is chaos and violent encounters, but it is important to note that we have procedures to deal with any allegations of excessive use of force,” the commander added. “I would note that we are covered by among the highest concentration of journalists in the world, our actions are highly transparent.”

When asked about the suggestion that officers may end up killing a demonstrator in self-defense, protester Bonnie Leung — of the Civil Human Rights Front — said police using real ammunition and guns was “unnecessary and unjustified.” Leung added that officers are able to protect themselves in “many different ways.”

“But what they are doing is that they are not just trying to protect themselves… they are actually doing more than necessary and more than the laws allow them to do in order to anger the protesters even more, and that creates danger.”

Allegations of police brutality have been a key rallying cry of the months-long protests, with crowds calling for an independent investigation.

While the government has announced the withdrawal of an extradition bill with China that kickstarted the summer of discontent, it has so far refused to consider investigating police outside the official system, though Chief Executive Carrie Lam has named two new members to an existing investigative body in an attempt to alleviate public concerns.

The senior police commander said that with regard to an independent investigation, “you really have to be sure that whatever measure you take now is helpful to the resolution of the situation, that you are not playing into the hands of people whose only objective is to undermine the police so this situation could get worse.”

The commander added that it could lessen the effectiveness of police on the front lines were they to face investigation during the unrest.

“We are still in the middle of a crisis,” the commander said. “Every single day we are still out there facing this threat.”

Some of the most violent scenes last week were not during the now familiar stand offs between protesters and police, but around the edges of the march, where both protester and pro-government groups attacked people who disagreed with them.

CNN reporters saw a mob of masked protesters attacking a man in the Tin Hau neighborhood after a brief confrontation, leaving him dazed and bleeding on the floor. In an earlier incident, video shared widely online showed a middle-aged man wearing a blue shirt attacked and left apparently unconscious by a large group of mostly young, black-clad protesters on Gloucester Road. According to the South China Morning Post, the unidentified man had shouted pro-police slogans before the attack.

Later on Sunday, a group of mostly middle-aged men were seen striking and threatening protesters in the North Point area. The area has a large mainland Chinese immigrant population, and there have been attacks on protesters in the area in past weeks.

Sunday’s violence came after a number of angry scuffles on Saturday between pro and anti-government groups, though none reached the level of violence seen the following day. Pro-Beijing groups sang the Chinese national anthem and pulled down “Lennon Walls,” collections of notes and flyers erected by protesters, around the city.

There were fears of further scuffles this weekend over a “Clean Hong Kong” campaign organized by stridently anti-protest lawmaker Junius Ho. Speaking to CNN earlier this week, Ho described the event on Saturday as an “environmental hygiene campaign” and said he “would not urge any confrontation” with protesters.

Police expressed concern that there would be violence during these events, and said they could potentially be declared an illegal gathering.

“In the end if there is violence we will deal with that,” the senior police commander said.

Speaking to reporters, senior police commanders emphasized the extreme pressure the force is under as the protests enter their sixteenth week.

“When we’re off duty, we can’t even have that sanctuary of normality,” one commander said. “Officers can’t even get married without protesters turning up to their wedding parties.”

Police officials said a team of clinical psychologists was working with front line officers to provide support and allow police time to decompress from the stress and abuse. “We all recognize that this has an emotional toll, and our officers need to be supported,” a senior commander said.

However, commanders rejected a suggestion that they were being asked to solve a problem that is beyond their capabilities and not receiving enough support from government. Previously, a senior police official told CNN that “this is a political issue, a political issue needs a political solution to solve it.”

On Friday, senior officers suggested that the situation could be relieved by courts taking a larger role in enforcing the rule of law, such as fast tracking trials and granting less bail in cases of protester violence.