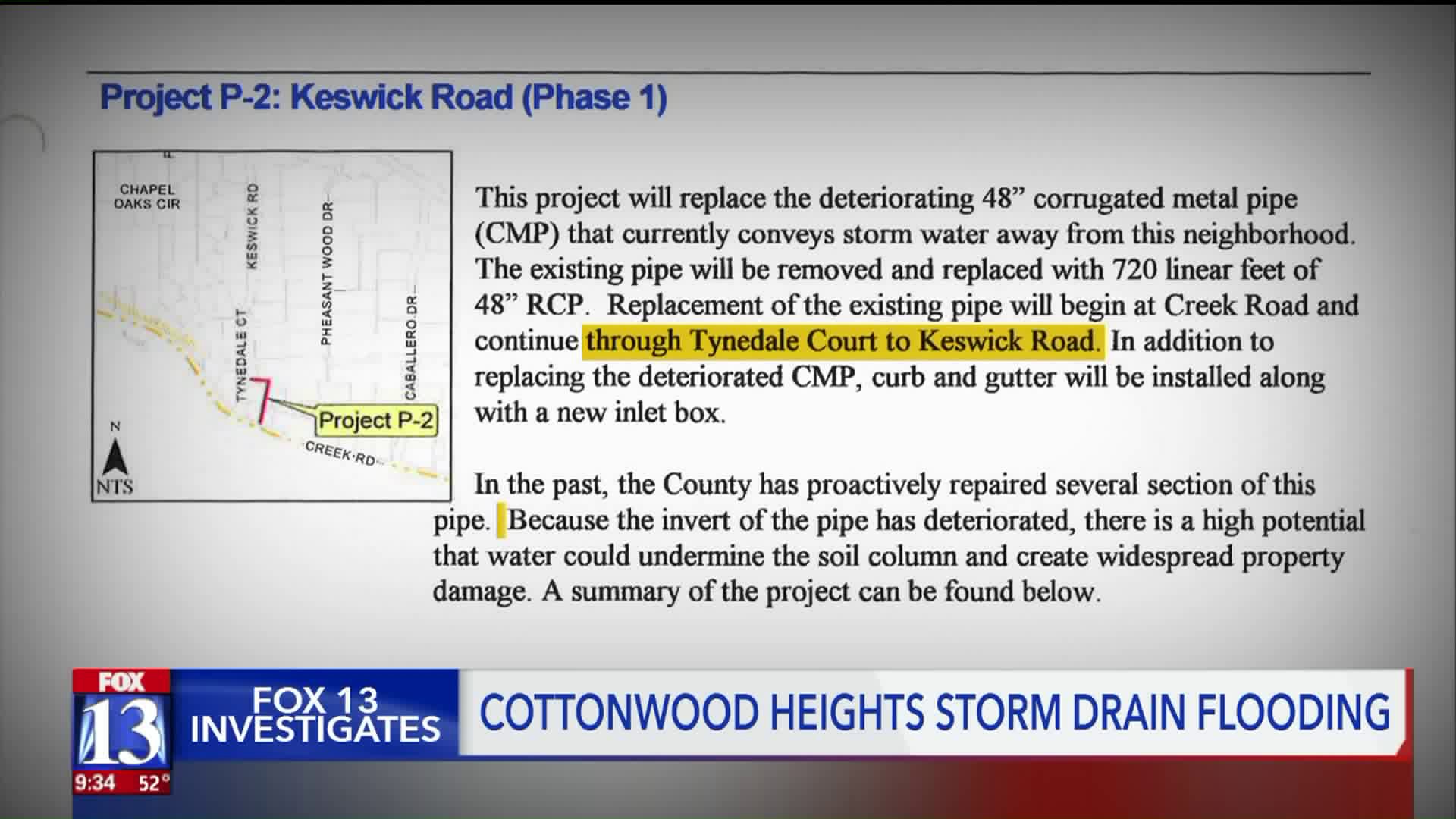 A FOX 13 investigation has revealed new information about the city of Cottonwood Heights` failure to maintain its storm drain system. Homeowners have been battling with the city ever since their homes were flooded by a storm last August. They blame a storm drain system that the city at one point said may not have been up to code. 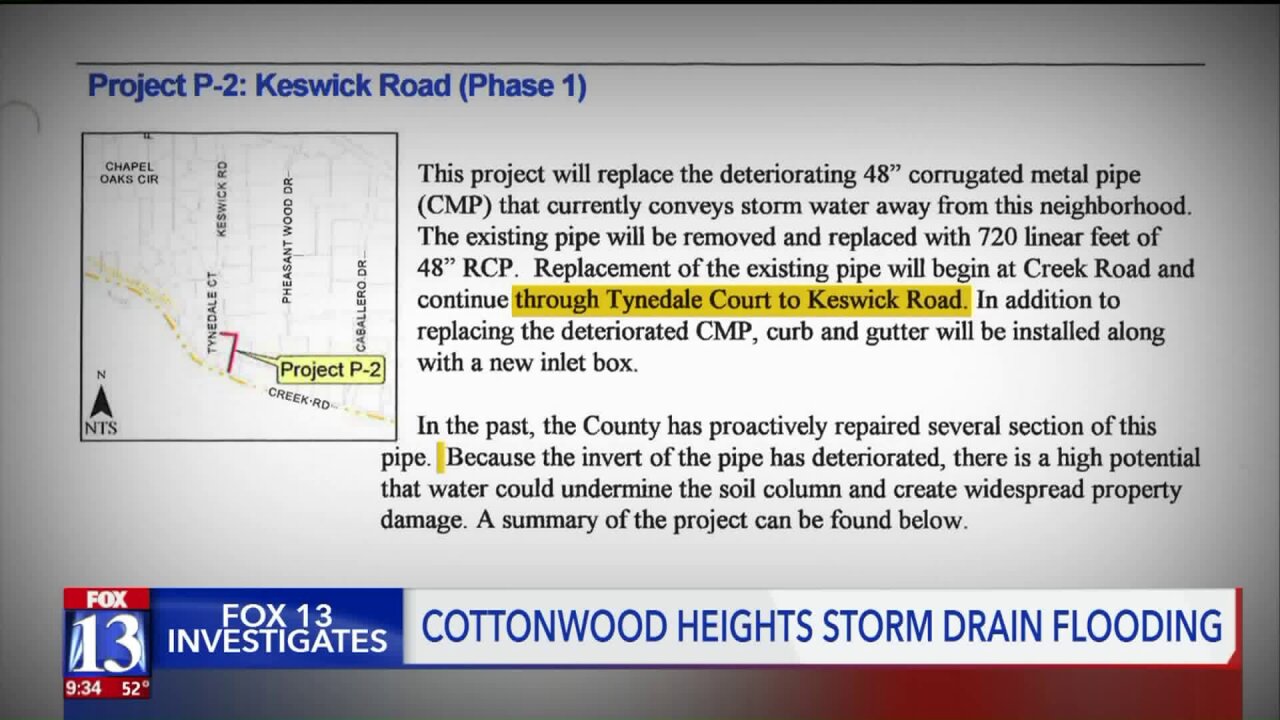 COTTONWOOD HEIGHTS, Utah — A FOX 13 investigation has revealed new information about the city of Cottonwood Heights’ failure to maintain its storm drain system.

Homeowners have been battling with the city ever since their homes were flooded by a storm last August. They blame a storm drain system that the city at one point said may not have been up to code.

Cottonwood Heights’ city manager, Tim Tingey, said the city has been struggling to obtain records detailing the specification of its storm drain system since 2005, when Cottonwood Heights became its own incorporated city.

“The records, we don’t have at this point,” he said in an interview last September. “I’m not sure where they’re at, because we don’t have those.”

Since the floods, FOX 13 has asked for a number of public records detailing the way the city maintains its storm drain system.

FOX 13 obtain a copy of the city’s its “Storm Water Capital Facilities Plan,” a report created in 2006 by the city and an engineering firm that still works with the city. Cottonwood Heights did not release the report directly to FOX 13, despite various records requests.

The report stated a “deteriorated” pipe running through Tynedale Court should have been replaced in 2006 in order to prevent “widespread property damage.”

“Because the invert of the pipe has deteriorated, there is a high potential that water could undermine the soil column and create widespread property damage,” the report reads. “Replacement of the existing pipe will begin at Creek Road and continue through Tynedale Court to Keswick Road.”

The city’s prediction was accurate.

John McEntire lives on Tynedale Court and suffered extreme flooding on August 8, 2019. He was informed that his insurance claim, valued at more than $90,000, will be denied despite the city’s failure to make improvements.

Instead of honoring McEntire’s claim, a representative with Traveler’s Insurance offered him a $12,000 settlement which would release the city of all liability.

“After review, we have determined that Cottonwood Heights would not be found negligent or held liable in this matter,” read the letter sent to McEntire. “The City is afforded several immunities under Utah Law… the rain storm and subsequent flooding that occurred on August 8, 2019 falls within this immunity.”

Tingey has not accepted FOX 13’s request for an interview since we uncovered the 2006 report, but he argues the city was not negligent in failing to make repairs listed in the document.

In an email, Tingey wrote that the city did make repairs to a portion of the pipe in 2015. He confirmed the city did not follow the 2006 study’s recommendation to replace the entire section of pipe.

“That pipe section that broke on August 8th was adequate in normal rain storms,” Tingey wrote. “The section of Tynedale that was fixed in 2015 was a problem area that we addressed, but there were no indications that the remainder of the pipe was inadequate.”

Tingey said he did not have documentation outlining his belief that would contradict the findings of the 2006 report, despite FOX 13’s repeated requests for him to produce a study or inspection record supporting his statements.

In response to the 2006 study, Tingey said the pipe in question “became deteriorated the instant it was placed and buried… that does not necessarily mean that that second section of storm pipe should also have been replaced in 2015.”

DRD Paving LLC replaced the pipe after it burst in August. Records obtained by FOX 13 show the repair cost $24,986.28. The city gave an additional $7,406.20 to DRD Paving to repair damage to a neighbor’s yard.

Photos of the pipe taken after it was removed from the ground show it is heavily corroded, with only half of the pipe still intact. McEntire said he and the contractors who made the repair do not believe the damage could have been solely caused by rainfall lasting only a few hours. McEntire also said the area in which the pipe was located had been slowly sinking for years, which makes sense now that he knows water had likely been washing away soil due to the pipe’s inability to hold even a small amount of rainfall.

“The bottom of the pipe was totally rotted out. They pulled it out. There was nothing left at the bottom of the pipe.” McEntire said. “What the city’s doing is, they’re just trying to avoid doing what’s right. That is just plain dishonest. Do we really want those people representing us?”