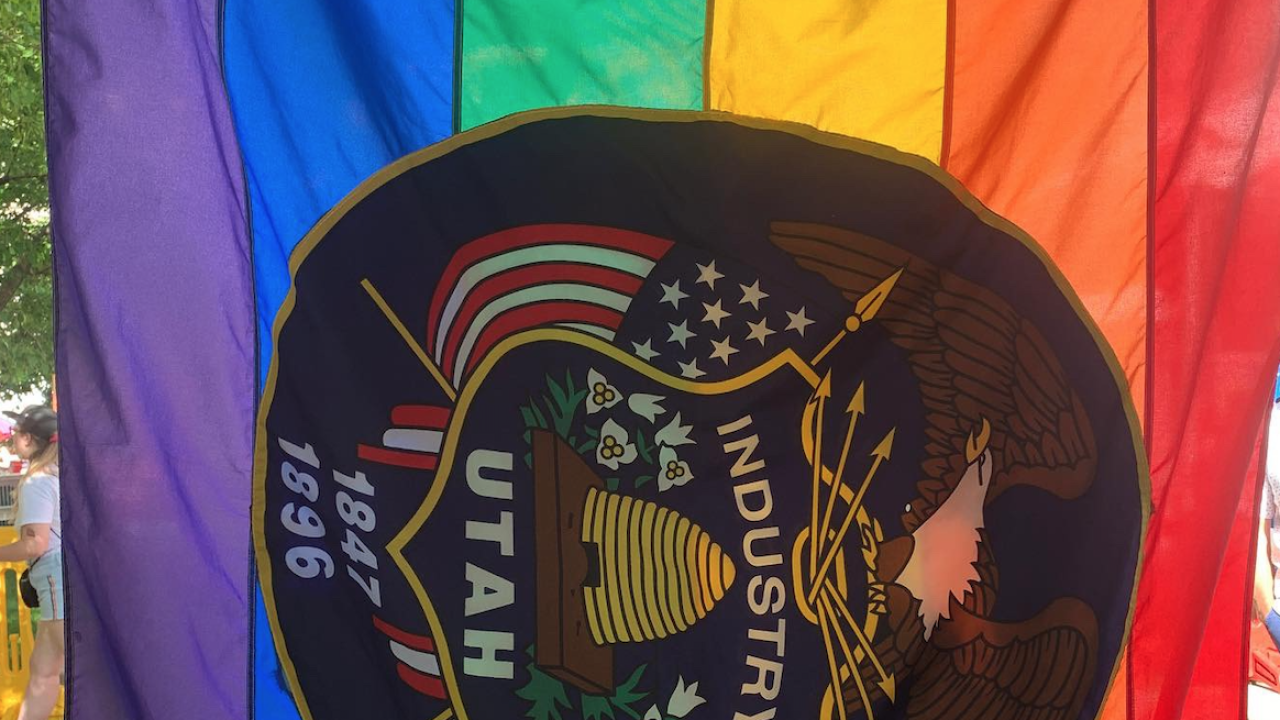 The state seal of Utah is embedded on an LGBTQ Pride Flag on display at the Utah Pride Festival. (Photo by Ben Winslow, FOX 13 News)

SALT LAKE CITY — A suicide prevention group claims only 6% of those who commented opposed a rule that would ban conversion therapy on LGBTQ children.

The other 94% were in support of the rule, Taryn Hiatt of the American Foundation for Suicide Prevention’s Utah chapter told FOX 13.

“That tells me that people are understating what it we’re trying to do and this language will protect youth from harmful forms of conversion therapy,” she said Monday.

Hiatt said she got the number from Utah’s Division of Occupational and Professional Licensing shortly after the public comment period for the proposed rule closed last week. However, the Utah Department of Commerce, which oversees the division, said it would not release a breakdown of the 2,457 public comments submitted.

The agency must now evaluate the comments and decide if the rule would be implemented, modified, or reconsidered. Utah Department of Commerce Executive Director Francine Giani previously told FOX 13 the process to decide on the rule would move forward.

The agency could implement a rule as soon as Tuesday, effectively banning conversion therapy in the state of Utah. But agency spokeswoman Jennifer Bolton said in an email that they also have up to 120 days to make a final determination.

Earlier this year, a bill banning conversion therapy on LGBTQ children was introduced in the Utah State Legislature. The bill had no opposition from The Church of Jesus Christ of Latter-day Saints. But social conservatives on Capitol Hill modified the bill so much that its own sponsor said he couldn’t support it anymore. After protests from teens who said they had endured harmful practices of attempting to change their sexual orientation and gender identity, Governor Gary Herbert issued a directive to DOPL to implement a rule and bypassing the legislature.

Boards overseeing psychologists and marriage and family therapists have previously approved of the language. A public comment hearing lasted hours with testimony from those who supported banning conversion therapy and those who opposed it, arguing it removes parental choice. At that time, DOPL said approximately 1,300 public comments had been submitted on the rule with 85% in support of a conversion therapy ban.

On the last day of public comment, the Latter-day Saint church, a powerful cultural and political influence in the state, submitted a public comment objecting to the rule. That could have significant impact on the future of the rule.

The faith complained the rule “fails to protect individual religious beliefs and does not account for important realities of gender identity in the development of children.”

Hiatt said she hoped the state would move forward with the rule.

“I’m going to hope DOPL stands by science and the experts,” she said. “No credible therapist seems to have an issue with the language.”

In a statement posted on Twitter on Monday, Rep. Craig Hall, R-West Valley City, the conversion therapy ban’s original sponsor, said he worked with the Church to achieve a balance and believes the proposed rule still does that. He said he would like to see the rule go into effect this week.

“Healthcare professionals are frankly the best qualified to review the science and make recommendations regarding this sensitive matter,” he wrote.

My thoughts about the proposed administrative rule regarding the prohibition of conversion therapy. #utpol pic.twitter.com/wgpvQdco1j