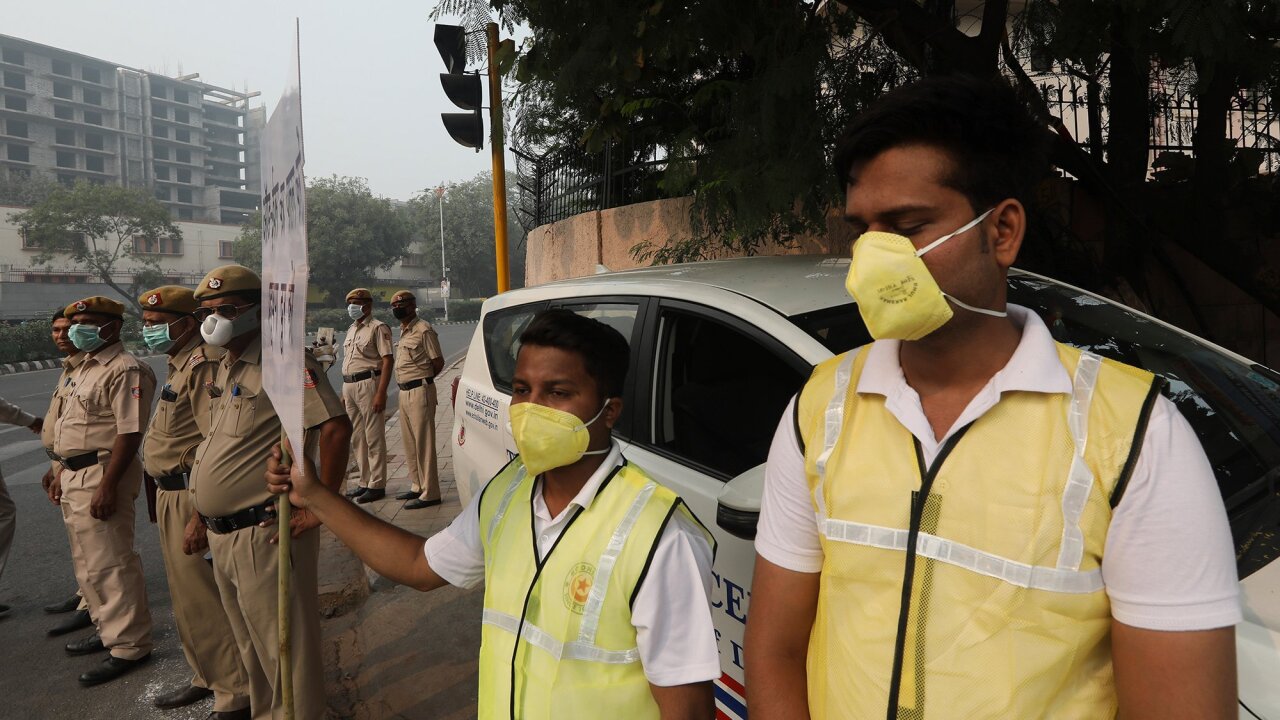 The dangerous levels of pollution have prompted authorities in New Delhi to declare a public health emergency, diverting planes, forcing schools to shutter, halting construction, and instituting new traffic controls limiting the number of cars on the road.

Most residents who can afford to are staying home with air purifiers turned on, though working class Delhiites are left with little choice but to venture outside — many of them without masks.

While pollution is a perennial problem in the city, this severe seasonal increase in smog has become all too familiar over the past few years. Here’s a look at what’s fueling that pattern.

New Delhi has been ranked the most polluted city in the world, but the air quality this week has been exceptionally bad — rising to levels more than 20 times what the World Health Organization (WHO) considers “safe.”

The crisis in India’s capital has many contributing factors but, according to Santosh Harish, a fellow at the Centre for Policy Research, it is primarily the result of emissions from transport, industry and power generation, as well as construction dust.

“Within Delhi there have been several scientific studies that have tried to estimate what the important sources are, and the conclusion is broadly that there are four types of sources,” Harish said. “You’ve got industries and power plants, you have transport emissions, particularly trucks but also private vehicles, you have waste burning of various kinds, and you have road dust and construction dust.”

Even before the latest drop in air quality, New Delhi had already announced plans to implement an odd-even car rule in the hopes of curbing pollution. It is the first time the rule has come into force since 2016, taking more than 4 million cars off the roads each day, depending on the number on their license plate.

And this isn’t a city specific problem. Pollution levels are high across the capital region, and much of northern India, Harish says.

India is home to 22 of the top 30 most polluted cities, according to a study in March by Greenpeace and AirVisual.

Part of what’s contributing to soaring pollution during this time of year is a seasonal agricultural practice known as “stubble burning,” when farmers raze their crops to make room for a new harvest, according to Siddharth Singh, a climate policy researcher and author of “The Great Smog of India.”

Previous efforts to crack down on this practice — for example, by providing farmers with subsidized equipment that would mean they do not have to burn leftover crops — have been unsuccessful. Farmers could also convert leftover straw into something more useful, like bio-energy pellets, but the cost of doing so can be prohibitive.

“The most important factor (contributing to the seasonal pollution) is stubble burning. The government needs to put a value to this agriculture,” Singh said, suggesting the government buys it and burns it cleanly instead. “It will always be cheap for farmers to pour some kerosene on it and burn it. I think this is the basic challenge, but it can be overcome.”

Last week, Delhi Chief Minister Arvind Kejriwal said the city had been “turned into a gas chamber” and blamed the conditions on “smoke from crop burning.”

Kejriwal singled out the governments of Punjab and Haryana states, which he said contributed to New Delhi’s pollution as farmers in those areas ignored bans on burning leftover crops in their fields.

But Harish, from the Centre for Policy Research, says he thinks the role that crop burning plays in fueling pollution may be overstated.

“In the last couple of weeks, stubble burning has played an important role, something of the order of about 40%, but I do think the Delhi Chief Minister is overstating the role that the farmers play and understating the role that polluters within Delhi play… I think they’re missing the point if Delhi is shirking all responsibility.”

The problem is compounded by winter weather, when temperatures fall and wind speeds slow.

These conditions create a temperature inversion, trapping particulates underneath a layer of warm air — meaning there’s nowhere for the smog to go.

“This time of the year, the meteorological conditions make it such that the pollutants don’t disperse away rapidly… as a result the pollution levels spike up,” Harish says.

A Cornell University study published in July described the combination of this seasonal weather and crop burning as a “perfect storm” for pollution.

“The perfect storm of conditions during November has created almost 30% higher atmospheric concentrations of fine particulate matter,” according to the study.

The terrain is another big factor that drives the trapping of pollution in the region, Apostolos Voulgarakis from Imperial College London’s Department of Physics, explains.

“It’s land locked, with the Himalayas on the other side. So the pollution that enters doesn’t easily escape. When you have these inversions it’s the perfect terrain not just to build up pollution but for it not to be able to escape, it’s like a bowl,” Voulgarakis said.

Without radical changes, all of these variables together mean that Delhi will very likely see the same pattern of pollution play out again.

“Odds are that Delhi is going to face the same thing next year. This is a very predictable, cyclical event that happens every winter. We have seen this the last several winters. Each time there is an outcry,” Harish said.

“But, in terms of what can change we really have not been seeing the type of reaction that is proportionate.”