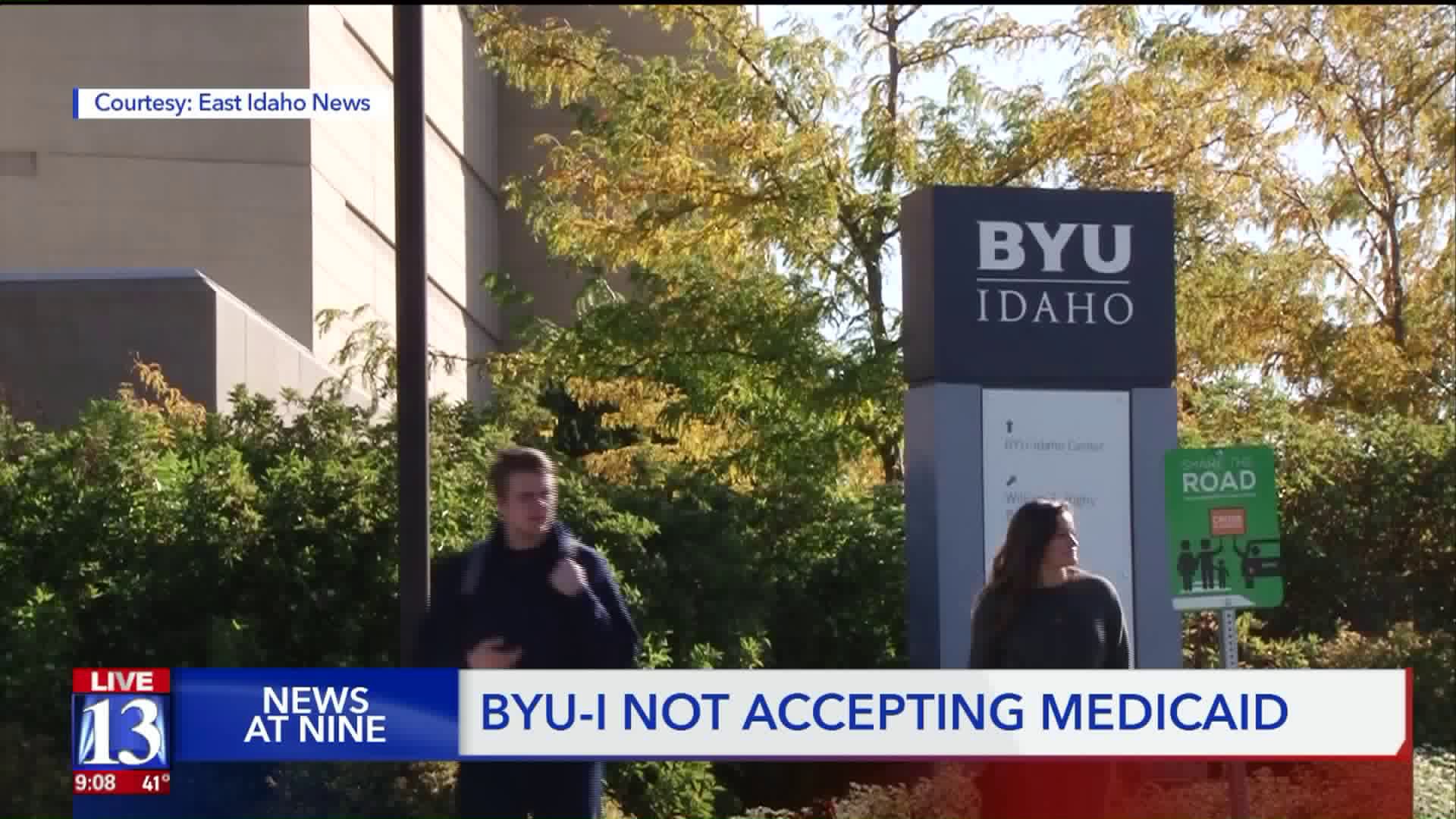 Brigham Young University - Idaho has announced it will no longer be allowing students to enroll in classes if Medicaid is their only form of health insurance. 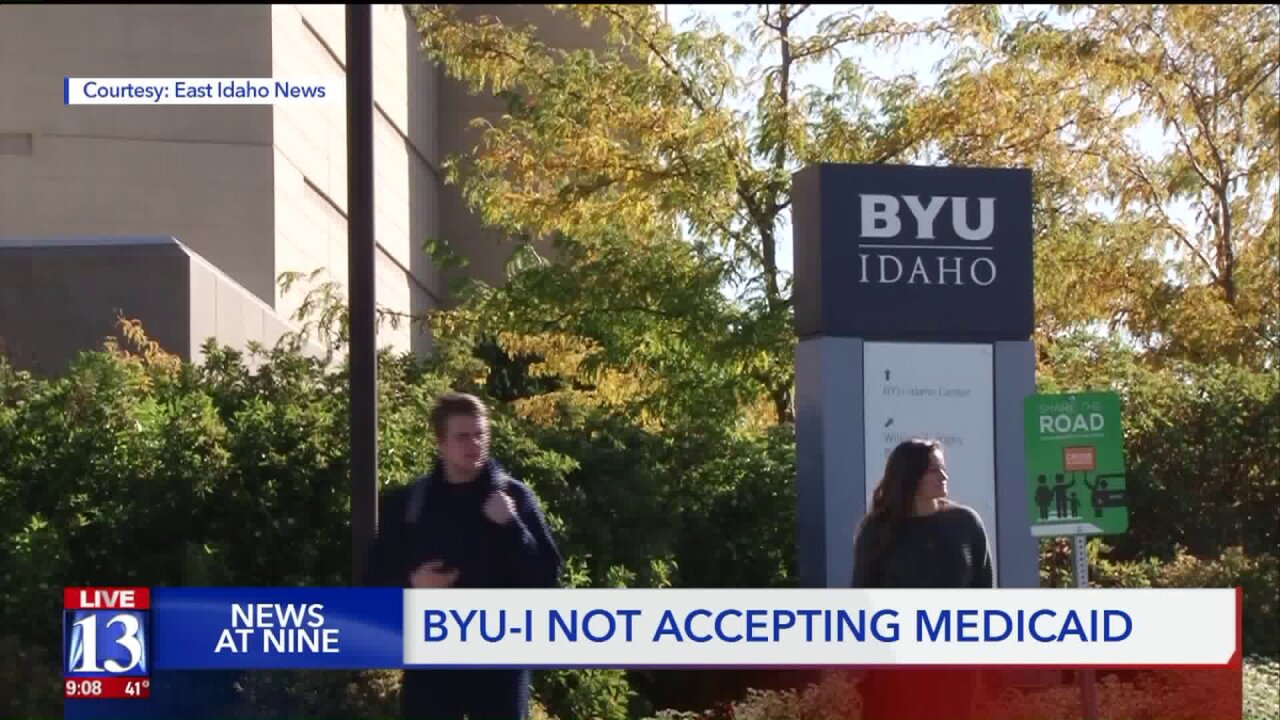 REXBURG, Idaho — Brigham Young University - Idaho has announced it will no longer be allowing students to enroll in classes if Medicaid is their only form of health insurance.

The policy change is forcing some students to drop out of school. Others plan to protest the change because of how important Medicaid is for them and their families.

Andrew Taylor, whose wife still attends BYU-Idaho, told FOX 13 he is now looking for a job to support his family.

“I am being forced to have to put my education on hold and completely withdraw from BYU-Idaho,” Taylor said. “It seems like they don’t even care about their students.”

More than 60 percent of Idaho voters chose to expand Medicaid in 2018.

On Wednesday, BYU-Idaho made an announcement through an email to students, stating the university will no longer be accepting Medicaid as an insurance-waiver option because “it would be impractical for the local medical community and infrastructure with only Medicaid coverage.”

FOX 13 spoke to officials with Madison Memorial Hospital, the only hospital within approximately 30 miles of BYU-Idaho’s campus.

Doug McBride, the hospital’s executive director of business development, said officials with BYU-Idaho often consult the hospital on community matters – but there was no such discussion regarding Medicaid.

This is the Medicaid announcement sent out to students, stating "it would be impractical for the local medical community and infrastructure."

The only hospital within 30 miles of BYU-Idaho says otherwise.

"We do not feel that that will be an overburden to us in any way.“ pic.twitter.com/4TY2adUjOn

Many students who relied on Medicaid in the past will now be forced to pay for their own private insurance – or pay for the school’s health care plan.

BYU-Idaho offers students a healthcare plan through Deseret Mutual Benefit Administrators (DMBA), a company owned by the Church of Jesus Christ of Latter-day Saints. The plan provides fewer services than Medicaid and is less affordable, costing approximately 500 dollars per semester for a single student. The plan does not have to comply with federal regulations for coverage because of its status as a private nonprofit trust.

Rachel Pomeroy, a student whose family has relied on Medicaid in the past, said she still does not understand who at BYU-Idaho would make a decision to disregard a federally-approved program.

“It seemed to come out of the blue and it doesn’t seem to make a lot of sense,” Pomeroy said. “I’ve been there four semesters, so that’s 2000 dollars we’re talking about. That’s like a whole semester’s worth of tuition.”

Various ideas and events, encouraging students to demonstrate peacefully, have been posted through the “Accept Medicaid BYU-I” group on Facebook.

“This Monday, we have decided to line up at the Executive Offices of the Kimball (Kimball 200) to voice our concerns. This is NOT a protest. We will not be picketing, shouting, or acting disrespectfully. We will merely be lining up at the reception desk (and ideally out the door and down the hall) to request meetings with administration, similar to what was done in the Student Health Center a week ago,” wrote Facebook group administrator Amanda Emerson. “Likely, we will be refused appointments and diverted elsewhere by receptionists. We should be persistent but respectful. The main goal of this event will not necessarily be to meet with administration, but to put pressure on them. To show them that we care about this and demand to be listened to.”

“This was news to a lot of us. I had never seen this happen before in a university,” Bullard said. “Medicaid is a very very important program for young families, for pregnant women, and for students… We don’t want people to make choices between their education and their healthcare.”

But students like Taylor say BYU-Idaho has already made the choice for them. He estimated the DMBA plan offered to him and his family through the university would cost more than 2,000 dollars per semester. He now accuses the university of trying to force students into the program.

“They are not giving us any reasons, so I’m led to believe probably the worst-case scenario,” Taylor said. “I am frustrated that I have been forced into this position.”

Students are withdrawing from @BYUIdaho because of the university's decision to no longer accept Medicaid.

The university sent this statement to @fox13. A spokesperson for BYU-Idaho did not provide a reason for the policy change. pic.twitter.com/TzzeJmnbbT

“The reasons are so unclear as to why BYU is doing this,” Bullard said. “I think the pressure might be coming more from the state, that they wouldn’t want to be paying for the program that their voters just approved… I think it’s probably a combination of factors and reasons, but what really matters is that people are being affected negatively.”

In a statement sent to FOX 13, a spokesperson for BYU-Idaho stated the university “is working with students, on a case-by-case basis, to help them with their healthcare options.”

The spokesperson did not explain a reason for the change in policy.