After almost 10 hours, I-15 is open in both directions after semi rollover in Lehi

LEHI, Utah --An overturned tanker closed I-15 in both directions near Lehi for almost ten hours Saturday.

According to Sergeant Brady Zaugg of Utah Highway Patrol, the tanker was full of highly flammable butane and crashed and rolled around 10:30 a.m.

The semi was hauling doubles. One of the trailers ended up on the raised concrete structure and the other tanker overturned onto its side

"Butane is highly flammable but not very reactive or explosive," Sgt. Zaugg said. "I can’t speak to the exact properties of butane under pressurized conditions in a canister. Obviously things can go terribly wrong, even if we hope that they don’t."

One of the tanks was leaking and as a precaution the freeway was closed and a quarter-mile area including the Brookside Apartments in Lehi were evacuated.

"We actually have a quarter mile radius around the area that we’re concerned about," Lehi Assistant City Administrator said.

The evacuations were lifted as soon as the butane was offloaded.

Vincent Vega lives just on the other side of the wall where the semi crashed. He was unaware his neighborhood had been evacuated.

“My neighborhood, it’s quiet but usually not this quiet,” Vega said. “There’s hardly any cars in the area. My neighbors? Seems that there’s nobody home.”

The driver of the semi was taken to a hospital but was not seriously injured and the cause of the crash is still under investigation. 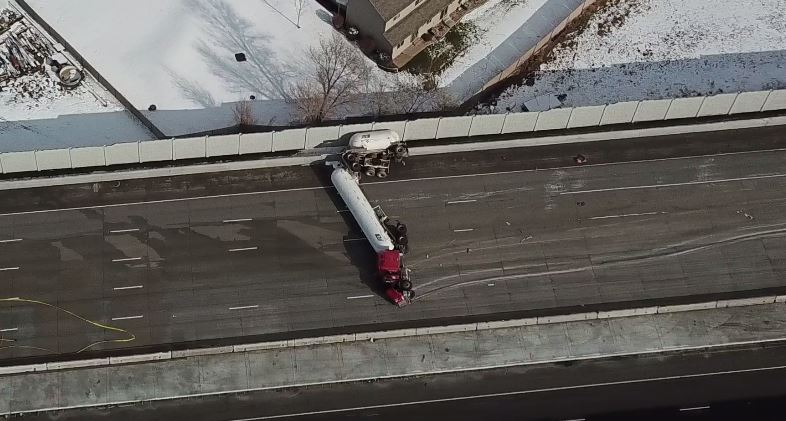