The House of Representatives approved the USMCA with a vote of 385 to 41 today. Analysts expect the Senate to take up next month the new trade deal that replaces 1994’s North American Free Trade Agreement (NAFTA). The two lawmakers who represent El Paso in the U.S. Congress voted in favor of it.

“Free trade with Mexico and Canada impacts just about every aspect of our lives, from the food on our tables and the clothes on our backs to the fuel in our cars,” said U.S. Rep. Will Hurd, R-Texas. “This trade agreement will allow continued economic prosperity and competitiveness as China tries to replace the United States as the most important economy in the world. It also helps us continue to lead the way in advanced technology by modernizing NAFTA to account for technological change” in the past 25 years.

U.S. Rep. Veronica Escobar, D-Texas, said the new trade agreement has added worker protections and has stronger enforcement mechanisms. For instance, it elevates the North American-content requirement in trucks from 62.5% to 75% and requires that 40% of the labor that goes into their manufacture is paid out at $16 an hour.

“As a representative of one of the largest manufacturing regions in North America, a vote for an updated NAFTA is a vote for the more than 23,000 El Pasoans dependent on a prosperous border economy,” she said.

According to border industry leaders, trade with Mexico accounts for 300,000 jobs in the El Paso-Las Cruces-Juarez region. Most of those jobs are in U.S.-managed manufacturing plants in Juarez, Mexico. Many of those plants provide vital components for Detroit automakers and ensure the affordability of wind-power generators in the Great Plains by producing wind blades.

Industry officials like Jerry Pacheco, president of CEO of the Border Industrial Association, have vigorously supported the USMCA because they believe it will bring more jobs to the border and make transnational operations more attractive for North American investors who “are on the sidelines” until the treaty is approved.

Pacheco said he’s confident the overwhelming support shown for the USMCA in the House bears good tidings for its passage in the Senate.

“I’m very confident that the Senate is going to ratify it. What I’m concerned is that they’ve already said they going to take it up after (president Trump’s impeachment) trial. … I’m concerned about the timeline but not that there’s any doubt of ratifying it. The House was the major hurdle,” Pacheco said. 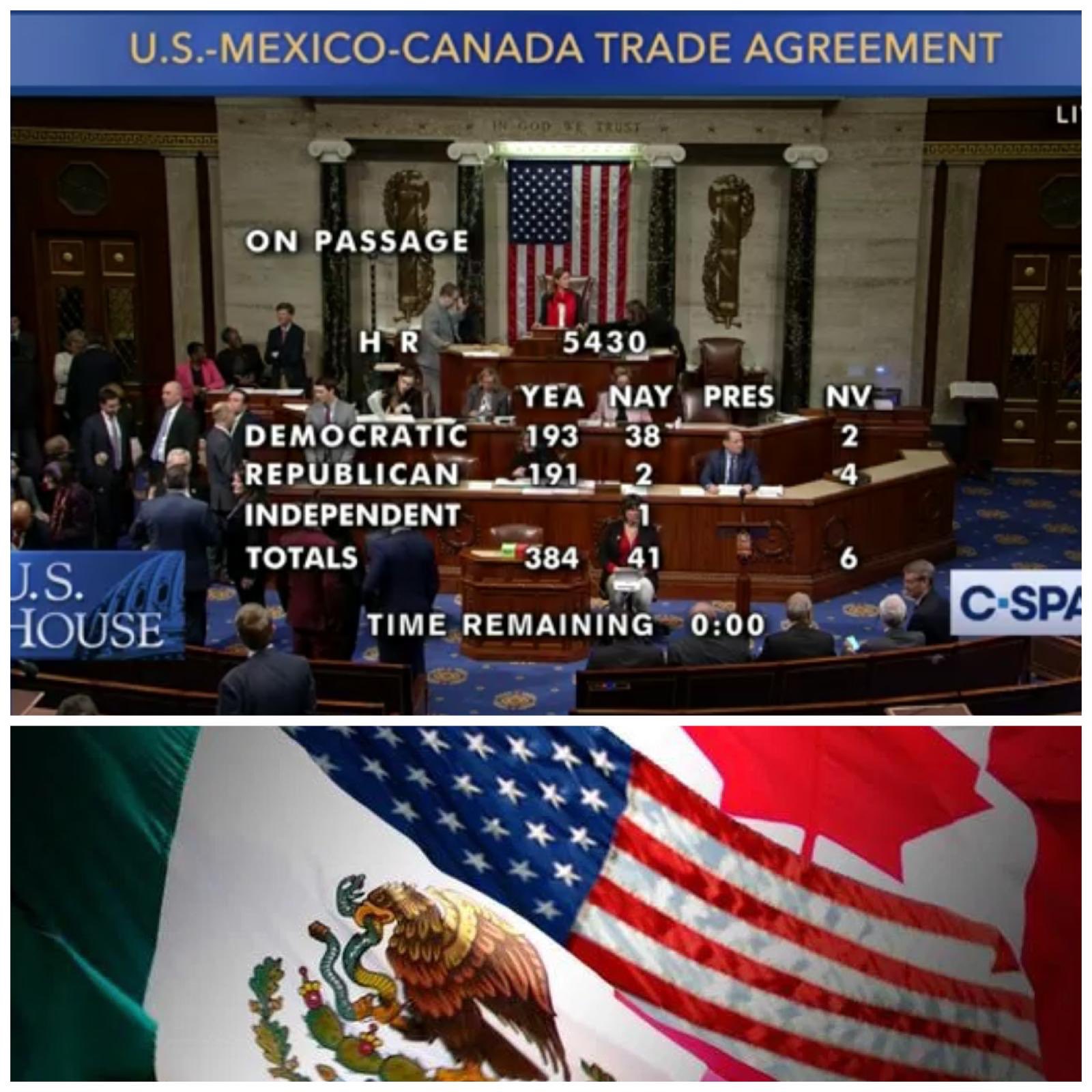 The House vote favored passage of the U.S.-Mexico-Canada Agreement.

Pacheco added that, despite “misunderstandings” over so-called labor inspectors, Mexico already approved the agreement in principle this summer. The ongoing controversy in Mexican circles is that these U.S. “inspectors” will be able to dictate changes in the Mexican industry, but Pacheco said they’re more like observers reporting to a USMCA board.

Jon Barela, CEO of the Borderplex Alliance, an industry advocacy group, also expressed confidence that the Senate would approve the new trade deal.

“Today’s vote is a critical victory for the border. It brings the Borderplex region one step closer to improving our competitiveness and increases the prospects for business development and expansion in our region,” Barela said

Hurd, whose district stretches from San Antonio to Far East El Paso, said the new treaty will bring $68 billion in new economic activity to the United States — nearly half in new auto plants; up to 176,000 jobs, including 76,000 in the automotive sector; and set standards in fields that didn’t exist in 1994, such as e-commerce and new technology.

Visit the BorderReport.com homepage for the latest exclusive stories and breaking news about issues along the United States-Mexico border.