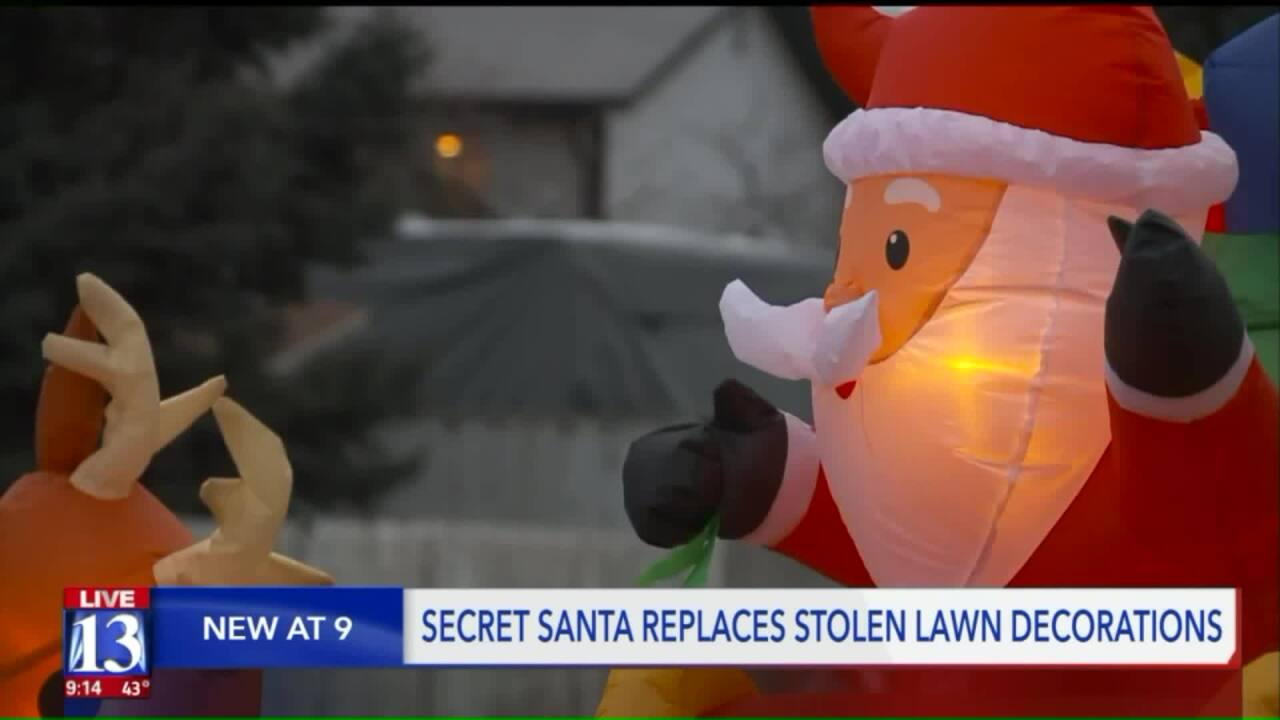 WEST JORDAN, Utah — An unlikely Secret Santa brought Christmas cheer back to one Utah family after a thief stole nearly half a dozen blow-up holiday decorations from their lawn, just before the big day.

At the Dickey family's West Jordan home, it’s all about spreading Christmas cheer.

“I love to decorate,” said Chris Ann Dickey, known by her friends as ‘Chrissy.’

On the house, lights are hung from the garage with care; if you check the front lawn, big blow-up versions of Old Saint Nick, some reindeer and Frosty are already there.

When the sun goes down, the lights come on — bringing a twinkle to the busy corner off Cougar Lane.

“When you come home from work and you turn the corner, you just see them all lit up,” Chrissy smiled.

With three different larger-than-life blow-up decorations strewn about the front lawn, it sounds like you’re standing inside of a vacuum. But it’s this noise that speaks volumes to their family’s traditions.

“When the grandkids were little, they would help me blow them up,” Chrissy grinned. “It’s just me and my husband and our son, so this is the only Christmas that we have… It’s like this is my memory with the grandkids.”

“It means a lot to me that I have some blow-ups out there,” she continued.

Every year, the Dickeys maintain that very tradition, packing their lawn full of blow-up decor.

“The sleigh and the deer here, then I have a dalmatian with another dog connected to it and then my six-foot dog,” Chrissy described all of their elaborate lawn decor as she pointed to a screengrab from her doorbell camera just last Friday.

“A little Christmas tree, and Tigger passed away because the light bulbs kept dying,” she laughed as she continued to point to each item. “And then a little Santa post that said, I think, ‘Santa stop here.’”

Fast forward to Monday, and this year’s display (with just three blow-ups) is suddenly looking rather sparse.

The change came early Saturday morning, when an uninvited guest with sticky fingers made a stop at their house.

“I actually opened the window all the way and looked and I just started freaking out, started bawling,” said Chrissy.

The entirety of the 3 a.m. thievery was captured by their doorbell camera.

“They came and they pulled this chord here and then just swooped them all away,” she said as she pointed to a spot on the lawn where a cluster of extension cords once sat. “They took one, two, three, four of them.”

The hooded person can be seen doing just that, pulling the cords and taking the lot with them.

This Grinch left their spirits feeling as empty as their yard.

“I try, I try to make it pretty and then they take it away from me,” Chrissy shook her head.

Until one day, an unexpected secret Santa brought them a gift they will never forget.

“I’ve got something for you,” a man can be heard saying on their doorbell camera as he approached Chrissy’s husband with an armful of brand-new Christmas blow-ups.

“Some guy pulled up right here and brought the reindeer, and then the snowman and the Santa Claus,” said Chrissy. “I just started crying.”

Those three inflatable decorations are now bringing life to their lawn once again.

And while it may not be as full as it was before — their hearts are even fuller.

So, who is this Secret Santa? According to the piece of paper attached to the largest box, it’s really not a mystery.

"Happy Holidays from the Park Centre Home Depot," it reads.

Chrissy said she doesn’t know how the Home Depot location heard about her story, all she has to say is “Thank you and Merry Christmas.”