‘Game on’: Republicans ramp up efforts to restrict abortion in 2020 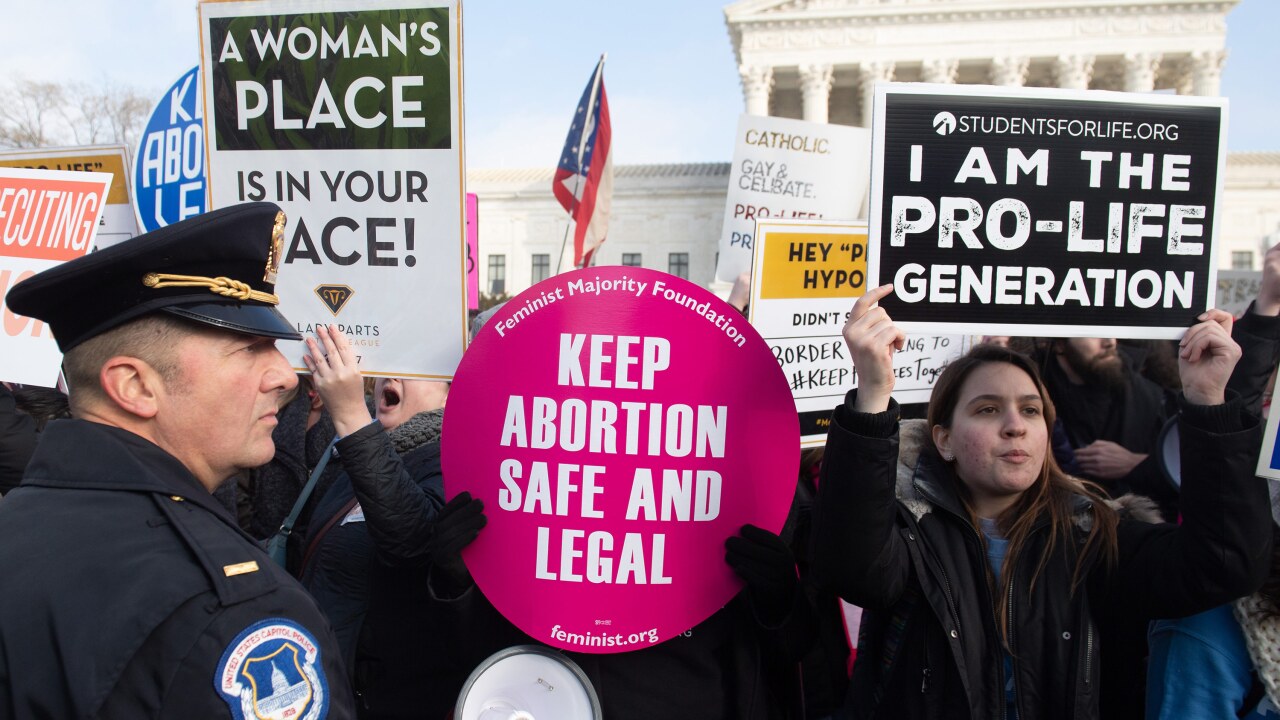 Abortion has resurfaced as a major issue in American politics with a flurry of measures making their way through state legislatures around the country — just as the Supreme Court is set to hear arguments in the first reproductive rights case since Justice Brett Kavanaugh was confirmed. Source: SAUL LOEB/AFP/Getty Images

(CNN) — Abortion has resurfaced as a major issue in American politics with a flurry of measures making their way through state legislatures around the country — just as the Supreme Court is set to hear arguments in the first reproductive rights case since Justice Brett Kavanaugh was confirmed.

In addition to passing bans on abortion earlier in pregnancy, Republican lawmakers and activists in states from Alabama to Utah have looked to further regulate the procedure, sometimes beyond what is medically possible, according to medical experts.

The wave of restrictions comes as Republican state lawmakers look for friendly rulings from a new wave of judges freshly appointed by President Donald Trump.

So far, no state has succeeded in forcing a broad court challenge to the landmark 1973 Roe v. Wade decision that legalized abortion nationwide. But more state-level bills are in the pipeline for consideration this year. Here are some of the most notable abortion measures of 2019 — and what to expect for 2020:

Eight states passed abortion restrictions in 2019 based on gestational limits. Heartbeat bills in Georgia, Kentucky, Louisiana, Mississippi and Ohio banning abortion as early as six weeks into a pregnancy, and Missouri’seight-week ban, as well as Arkansas‘ and Utah’s 18-week bans, would chip away at the 24-week standard set by Roe. Judges have blocked all of the laws that have been taken up in state-level challenges.

Lawmakers in several other states are still debating new restrictions. A heartbeat bill passed by the South Carolina House in April now awaits consideration in the Senate. Republican Pennsylvania legislators introduced a heartbeat bill in October — despite Democratic Gov. Tom Wolf’s vow to veto any such bill that reaches his desk.

In some states, activists looking to work outside the legislature are collecting signatures for 2020 ballot initiatives — including for a 22-week ban in Colorado, and for a heartbeat ban in Michigan.

Alabama made headlines this past spring with what many called the most extreme abortion ban in the nation that could punish doctors who perform abortions with life in prison. The near-total ban only allows exceptions for a “serious health risk” to the woman, ectopic pregnancies and lethal fetal anomalies — but not for instances of rape or incest. A federal judge ruled in favor of Planned Parenthood and the American Civil Liberties Union in October to block the law.

But other states have taken note of Alabama’s strategy, opting not to tie their bans to a specific week but to the simple existence of a pregnancy. Tennessee has a near total abortion ban teed up for when the state Senate convenes in January that could block abortion based on the presence of a pregnancy hormone detectable as early as 10 days from conception.

Ohio lawmakers made headlines of their own in November, after introducing an over 700-page bill that would “create the capital offense of aggravated abortion murder and the offense of abortion murder” — meaning doctors who perform abortions could face life in prison or the death penalty. The bill would also go one step further, calling for doctors to “reimplant an ectopic pregnancy into the woman’s uterus,” which doctors say is medically impossible.

2019 also saw a litany of state measures looking to restrict, create obstacles to or dissuade those pursuing the procedure. Guttmacher counted 58 abortion restrictions, including gestational bans, that were enacted last year.

One common form was so-called “abortion reversal” bills, which require abortion providers to tell patients that medication abortion could be reversed. While Arkansas, Kentucky, Nebraska, North Dakota and Oklahoma all codified such measures last year, claims of potential abortion reversal are “not based on science and do not meet clinical standards,” according to the American Congress of Obstetricians and Gynecologists. Medication abortion, a nonsurgical procedure that’s effective until about 10 weeks into a pregnancy, accounted for about 39% of abortions in 2017, according to Guttmacher.

The American Medical Association, the main industry group for doctors, brought a legal challenge against North Dakota’s law in July, alleging that the law violated medical ethics and forced providers to convey a claim “about fetal personhood that is unmoored from medical science.” A federal judge sided with the doctors and blocked the law in September.

Going into 2020, a slew of different types of regulations could make abortion more difficult to access in several states. In Michigan, a measure to ban dilation and evacuation abortions, a common type of second trimester abortions, could appear on the ballot — organizers said last month that they had submitted more than the necessary number of signatures to be authenticated. In Pennsylvania, legislators introduced a bill in November requiring health care facilities to “cremate or inter the fetal remains” from miscarriages or abortions.

While states have taken the spotlight in the battle over reproductive rights, the federal government has also taken several steps through the Department of Health and Human Services to regulate or restrict abortion access, resulting in legal challenges with mixed results. In November, a federal judge struck down the department’s so-called conscience rule, which permits health care workers who cite moral or religious objections to opt out of providing certain medical procedures like abortion.

But the effects of another department rule are already being felt — a prohibition on taxpayer-funded Title X family planning clinics from referring patients for abortions. Planned Parenthood, a key provider that professed to cover 40% of the program’s participants, opted to pull out of the program after the 9th US Circuit Court of Appeals ruled in August that the department’s regulations could go into effect despite a pending legal challenge.

The impacts of the shift have been stark. About 900 clinics have dropped out of the program, according to a report by reproductive rights group Power to Decide, citing instances of more limited and expensive services. Additionally, after the department opted to reassign the relinquished Title X funds to other remaining participants, a report by the nonpartisan Kaiser Family Foundation found gaps in the new coverage.

In October, the justices agreed to hear a case pertaining to a Louisiana law that requires doctors to have admitting privileges at a hospital within 30 miles of the facility where an abortion is performed. Arguments are scheduled for March.

Some justices also expressed last year that a Supreme Court reckoning with abortion is long overdue. Justice Clarence Thomas said in June that he wants the high court to consider rolling back historical precedent on abortion, arguing that “we cannot continue blinking the reality of what this court has wrought.”

And even before the court hears arguments in the Louisiana case, the court addressed the subject in what cases it chose not to consider last year. Last month, the court declined to hear a challenge to a Kentucky lawrequiring doctors to describe ultrasound images and play fetal heartbeat sound to abortion seekers — thus allowing the law to go into effect.