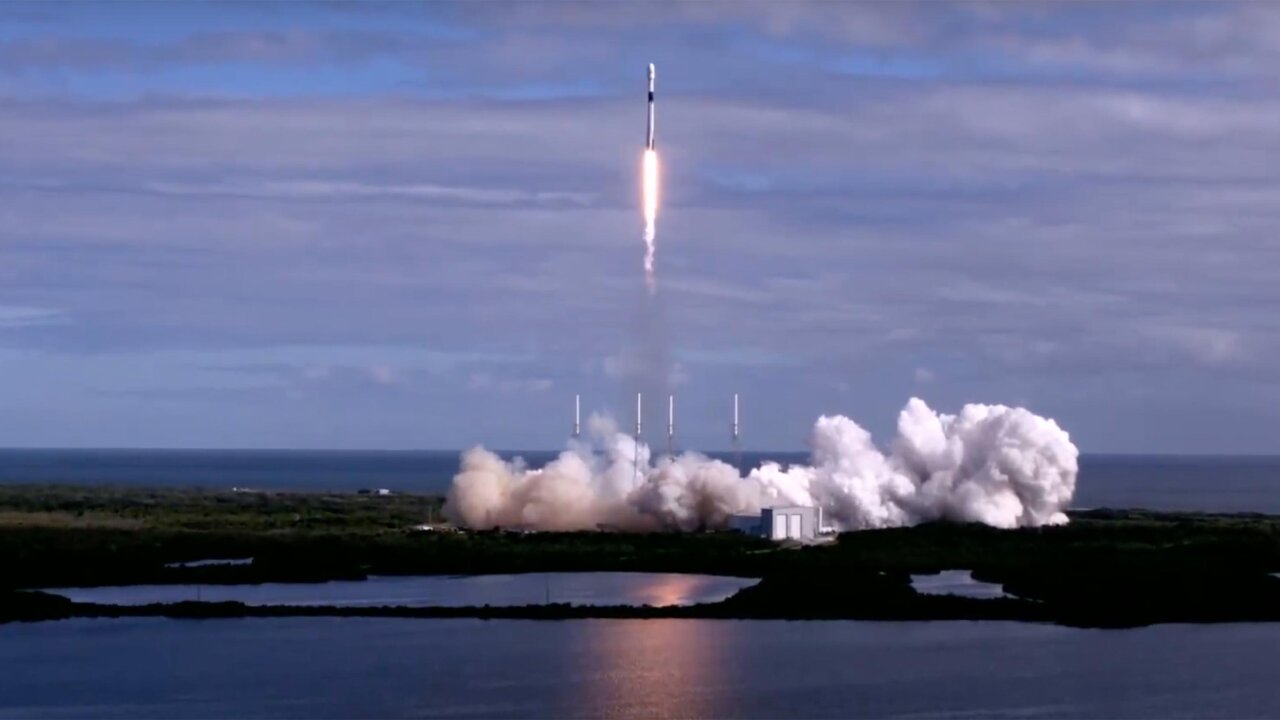 SpaceX is launching its third batch of internet-beaming satellites kicking off what is expected to be a remarkably busy year for the company as it readies its new broadband business. Source: SpaceX

(CNN) — SpaceX will launch its third batch of internet-beaming satellites Monday evening, kicking off what is expected to be a remarkably busy year for the company as it readies its new broadband business.

About 60 small satellites will launch into orbit atop a SpaceX Falcon 9 rocket. Liftoff is scheduled for 9:19 pm ET from Cape Canaveral Air Force Station in Florida.

This batch of satellites will join more than 100 others that SpaceX deployed last year. And — if all goes as planned — there will be 23 more launches by the end of this year, growing SpaceX’s Starlink constellation to more than 1,500 satellites.

Starlink is already the largest telecom satellite constellation in existence, and SpaceX has regulatory approval to launch a total of more than 10,000 satellites. The company is seeking approval to deploy another 30,000 on top of that.

The goal is to offer affordable internet service to parts of the United States by mid-2020, and eventually to beam cheap high-speed broadband across the globe.

When Starlink’s service launches, SpaceX says it plans to go directly to market. That means its space-based internet service will compete directly with ground-based providers that dominate the industry with services like U-Verse, Fios and others. (U-Verse is sold by CNN’s parent company, AT&T.)

It’s a business plan that could bring in billions of dollars per year in revenue for SpaceX. But it also comes with enormous questions — and risks.

The price of building and launching the satellites will likely run as high as $10 billion, according to one early estimate from the company. There are also technical hurdles, such as how to build user terminals that consumers will be able to afford. Customers will need these user terminals, which will use complex antennas, to set up usable broadband connections at their home or office.

SpaceX will also need to figure out how to make sure the satellites avoid disastrous collisions as space becomes more congested, and astronomers have raised concerns about the multitudes of satellites disrupting their view of the night sky.

The era of megaconstellations

SpaceX is building a so-called “megaconstellation” of smaller and cheaper satellites that work together to accomplish a task instead.

SpaceX is not alone, however. Amazon and Softbank-backed OneWeb are also in the early stages of developing and deploying internet-beaming satellite constellations of their own.

Other companies are building satellite constellations for other purposes, such as imaging Earth to track ground shipments or monitor crop growth.

All of these companies must grapple with the steep price of building and launching the satellites into space. And they must contend with the massive backlog of small satellites waiting for a ride to orbit.

SpaceX’s clear advantage is that it builds its own rockets.

And while the Falcon 9 was designed to carry heavy payloads, such as large telecom satellites destined for distant orbits or loads of cargo for the International Space Station — the Falcon 9 is also suited to carry up large batches of small satellites in one launch.

What will be new in 2020 is that SpaceX plans to use its Falcon 9 rocket for dedicated Starlink missions about as often as it’s used it for big revenue-earning missions.

As Starlink grows, SpaceX CEO and chief engineer Elon Musk has pledged his company will be a responsible steward of space.

Yet, astronomers say they’ve already seen their fears come to fruition: Images that scientists say show sunlight glinting off the devices, mucking up their view of stars and planets, popped up on Twitter after each of SpaceX’s first two Starlink launches.

Musk has said he’s consulted with astronomers, and insists the issues become less severe in the weeks after launch when the satellites reach their intended destinations in orbit. Musk also says the company will continue to tweak the satellites’ design and coloring to ensure minimal interference.

Concerns have also been raised among space debris experts, who worry about safety as SpaceX and other companies flood Earth’s orbit with thousands of new devices.

Starlink satellites will orbit close to Earth, so if one malfunctions, SpaceX says they’ll be pulled out of orbit within months instead of turning into uncontrollable space garbage that floats around for years or decades into the future. Each satellite will also be rigged with autonomous collision avoidance software, allowing them to dodge potential crashes without relying on human monitors.

But even if SpaceX uses every best practice, there’s no guarantee other companies will. And that’s why the dramatic increase in the number of satellites in space raises concerns.

One collision can spew out thousands of pieces of debris. And every piece of garbage has the potential to collide with another satellite, running the risk of setting off a disastrous chain reaction that could leave orbit so cluttered that satellite launches and exploration come to a grinding halt.

A common complaint among space companies is that there aren’t adequate regulations, an issue that is made more difficult by the fact that no one country can dictate rules that apply to satellites deployed abroad.

“It’s like any kind of environmental stewardship,” T.S. Kelso, a senior researcher for satellite-tracking company Analytical Graphics Inc., told CNN Business. There isn’t always a business incentive to do the right thing, but you don’t want to reach the point where you’re saying, ‘Gee, I wish we did this earlier.'”