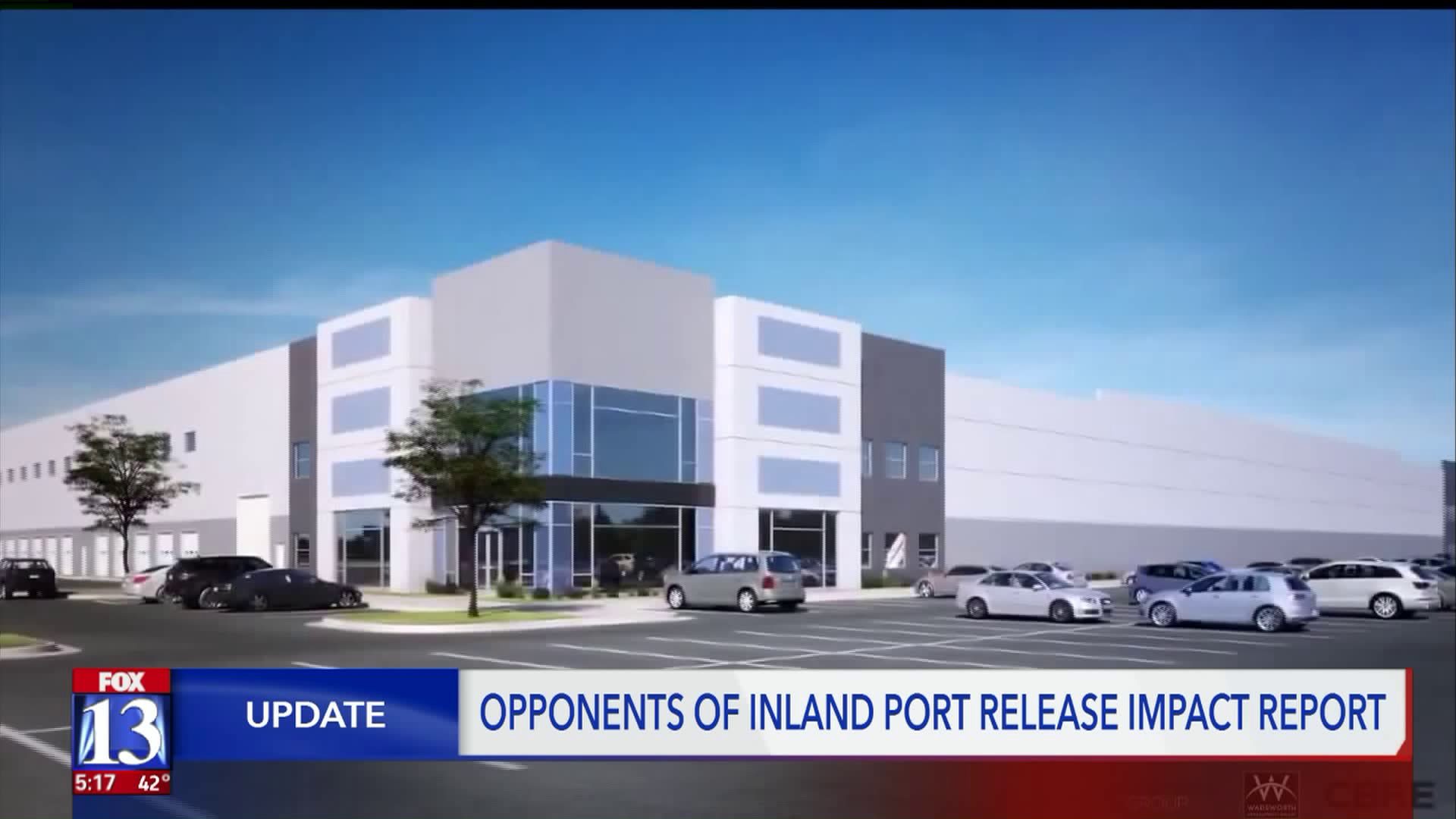 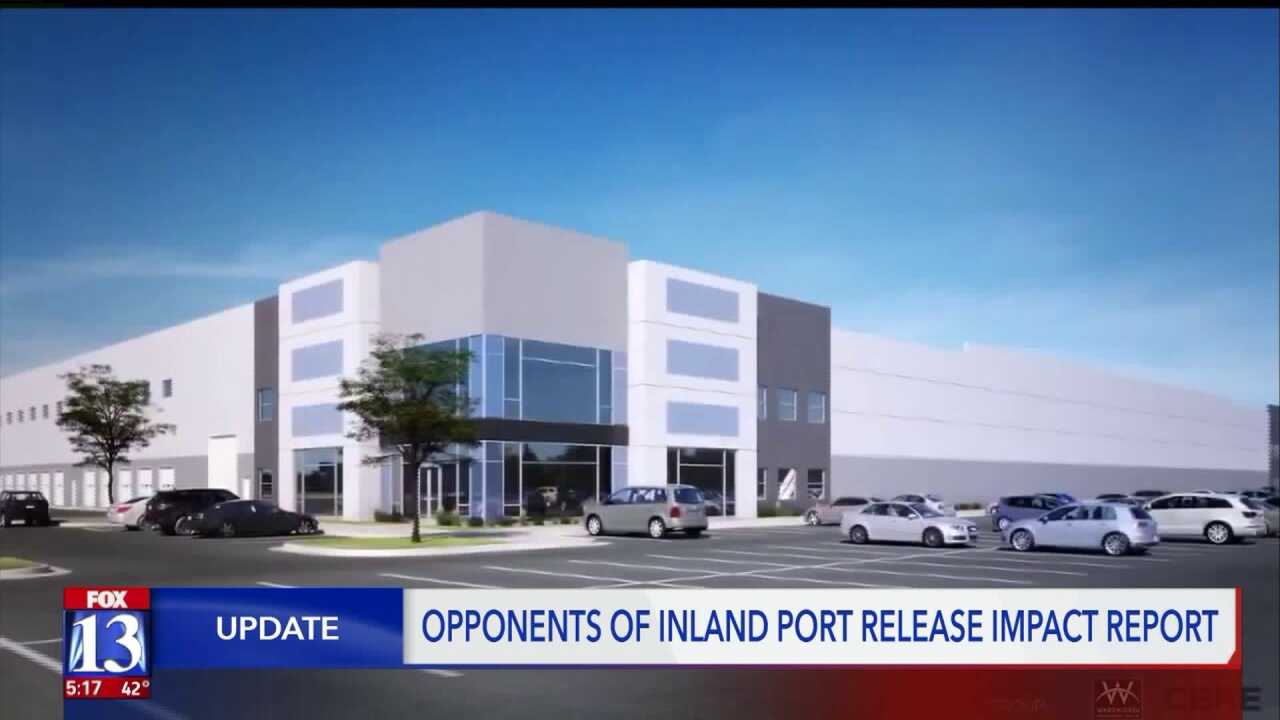 With signs in hand, a group of volunteers with the ‘Stop the Polluting Port Community Coalition,’ stood huddled around a small podium as they waited for each speaker to come up. A person on each side of the group held a banner which read, ‘invest in our future, not climate chaos.’

“It’s the future of Utah that’s at stake with this,” said Deeda Seed, a woman with the Center for Biological Diversity, who led Wednesday’s event.

Five people took turns stepping out of the huddle and up to the microphone, sharing concerns of an ‘environmental disaster’ which they believe would be brought about by the Utah Inland Port.

For the rest of the group, signs spoke louder than words.

‘Hacia La Justicia Climatica’ (translation, towards climate justice) were the words on another, accompanied by a butterfly with a woman in the center, representing mother earth.

The rest of the pieces of paper and poster boards were covered in red stop signs, saying, ‘stop the polluting port’ and ‘repeal the dirty corrupt port.’

The signs, small representations of what the group believes to be a much larger issue — the Utah inland port, a massive freight and warehouse transfer site to be placed on more than 16-thousand acres of undeveloped land in Salt Lake’s Northwest quadrant.

During the 2018 legislative session, a bill was passed establishing an inland port authority and designated which area it would have jurisdiction over — the project has been rife with controversy and concerns, even aggressive protests.

On Wednesday, ‘Stop the Polluting Port Coalition’ debuted a 13-page report (read the full report below) addressing concerns that have been voiced since the project’s inception. Including major concerns over air quality, environmental, transportation and community impacts.

The coalition, however, believes it will bring an environmental disaster — their concerns weighed heavily on air quality and environmental impact.

“We do not need this port, we have a full-employment economy, we do not need crappy warehouse jobs,” said Seed.

During Wednesday’s announcement, Dove took the podium to address concerns regarding the ecosystem and migratory birds.

“The south end of Great Salt Lake, [is] directly in the flight path of some 10-million birds that use the lake annually,” Dove said. “It is a shameful, unconscionable project that will desecrate and destroy thousands of acres of critical wildlife habitat.”

In terms of transportation, David Scheer, a speaker on behalf of the Capitol Hill Neighborhood Council, believed the city and surrounding areas are not prepared for the influx of traffic and transportation issues.

“I calculated that this will cause 11,600 additional car and truck trips on our streets and highways every day,” Scheer said.

Each speaker, also took a moment to address the lasting impacts they believe will coincide with the inland port.

“Although we can’t vote, my generation deserves a say in our future,” said 16-year-old climate activist, Sophie Dau. “I think I speak for all of us when I say we’d rather repeal the port and lose an opportunity for minor growth, in exchange for having a future.”

Many of the concerns were echoed by the greater public in a survey, conducted by The Inland Port Authority in 2019.

As of now the inland port project is ‘concept only’ — in fact there isn’t even a date for shovels to start hitting the ground.

Still, the coalition said their main goal is to, ‘repeal the port.’

“The reason so many people are concerned about this is because it really is the future of our state that’s at stake,” Seed said. “We’re going to keep showing up! Right?” Seed asked the group behind her.

The Inland Port Authority sent a statement to FOX 13 (below), saying they were working on improving environmental and economic outcomes. They continued, saying the research was an in-depth process, which they hope to share with the public later this quarter.

“We understand advocates released some compiled information today that I have not yet seen. I can say what our intense focus has been, and that is work on a Strategic Business Plan that will help us make data-driven decisions on how the Utah Inland Port Authority can improve environmental and economic outcomes. We are coordinating with and using analytical methods consistent with state and local partners responsible for monitoring and forecasting things like travel demand, employment, air quality, water quality, habitat, and noise impacts. Using national best practices, UIPA is also looking at truck routes through GPS data, logistics-dependent industry clusters around the state, international container import/export data, and collecting sample truck counts in the jurisdictional area. This data gathering and technical analysis takes time. It’s robust and in-depth. It’s the standard we are holding ourselves to and any current or future partners to. I’m excited to share this work once it is ready later this quarter.”
-Jack Hedge, Executive Director of Utah Inland Port Authority

The coalition will hold a ‘repeal the port’ rally on February 3, from 4-5 p.m. in the rotunda at the Capitol Building, the event is open to the public.