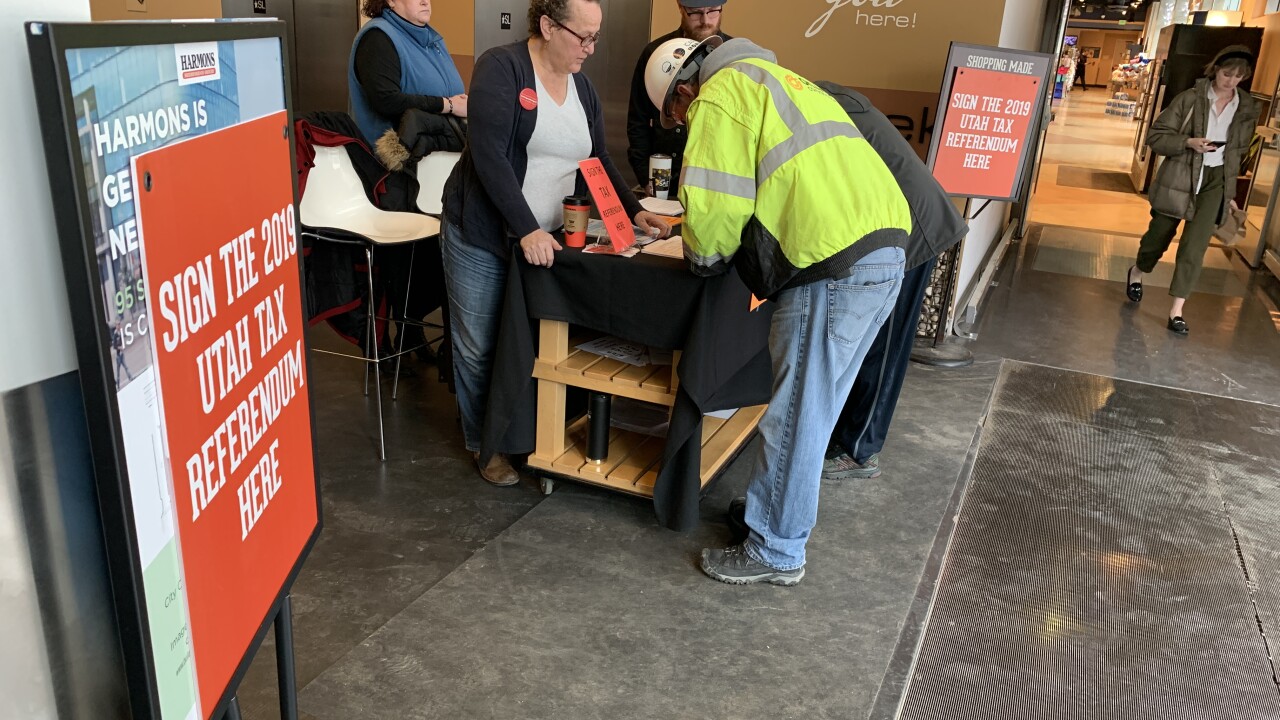 Gina Cornia of Utahns Against Hunger collects a signature at a tax referendum signing event at Harmons. (Photo by Ben Winslow, FOX 13 News)

SALT LAKE CITY — As signatures for the referendum on the legislature’s tax overhaul bill continue to be counted, state elections officials report a stunning number of signatures are not being rejected.

We have been at 93.8% in Utah County, so right on trend with that. It’s truly remarkable.

That means that not a lot of signatures are being rejected. For comparison, some of the initiative campaigns in 2018 had as many as 15% of their signatures tossed.

Referendum supporters claim to have gathered about 152,000 signatures and through their grassroots effort to qualify for the November ballot. They only need approximately 116,000. Additionally, they need to meet population thresholds in at least 15 counties. The referendum claims to have 18.

As of Wednesday night, the referendum has just over 79,000 signatures verified. Elections officials have until Feb. 4 to complete the verification process, and through a rolling 45-day signature removal period, it could be certified for the ballot by March 17.

The referendum potentially qualifying has the power to upend the 2020 Utah State Legislative session. House Speaker Brad Wilson, R-Kaysville, has said they likely cannot implement the tax reform bill passed in special session with a November vote on it pending.

In a joint statement on Wednesday, Speaker Wilson and Senate President J. Stuart Adams appeared to still defend the bill, while promising to keep working on it. Their statement reads:

“Utah is an extraordinary place to live and work and there is no greater evidence of that than the tremendous growth and prosperity we are currently experiencing. Efforts over the past year to reform our tax system and provide tax cuts have been aimed at preserving the high quality of life we enjoy. We recognize the current tax reform plan created concern for some Utahns and the legislature remains committed to crafting solutions Utahns can be proud of while ensuring our state continues to prosper.”

Republican leaders on Capitol Hill pushed the tax bill, warning that Utah is facing some serious financial problems in the future without reforms. The income tax on education is earmarked exclusively for education; while sales tax funds every other essential government service from health care and roads to other programs.

The tax bill lawmakers passed in special session cut the income tax by $160 million, giving Utahns more money in their paychecks. At the same time, it raised the sales tax on food, gasoline and imposed new taxes on some services (lawmakers have said Utahns are buying more services than goods, leading to sales tax declines).

The food tax has been largely unpopular, driving a lot of the referendum effort. Referendum backers got a big boost when Harmons Grocery and Associated Food Stores opened their locations to signature-gathering efforts. Harmons has been particularly outspoken about the food tax, although legislative leaders note they never spoke to them as the bill was being crafted.