New information about a cold case suspect who police are calling the “Clearfield Rapist"
Posted: 6:49 AM, Feb 11, 2020
By: Adam Herbets 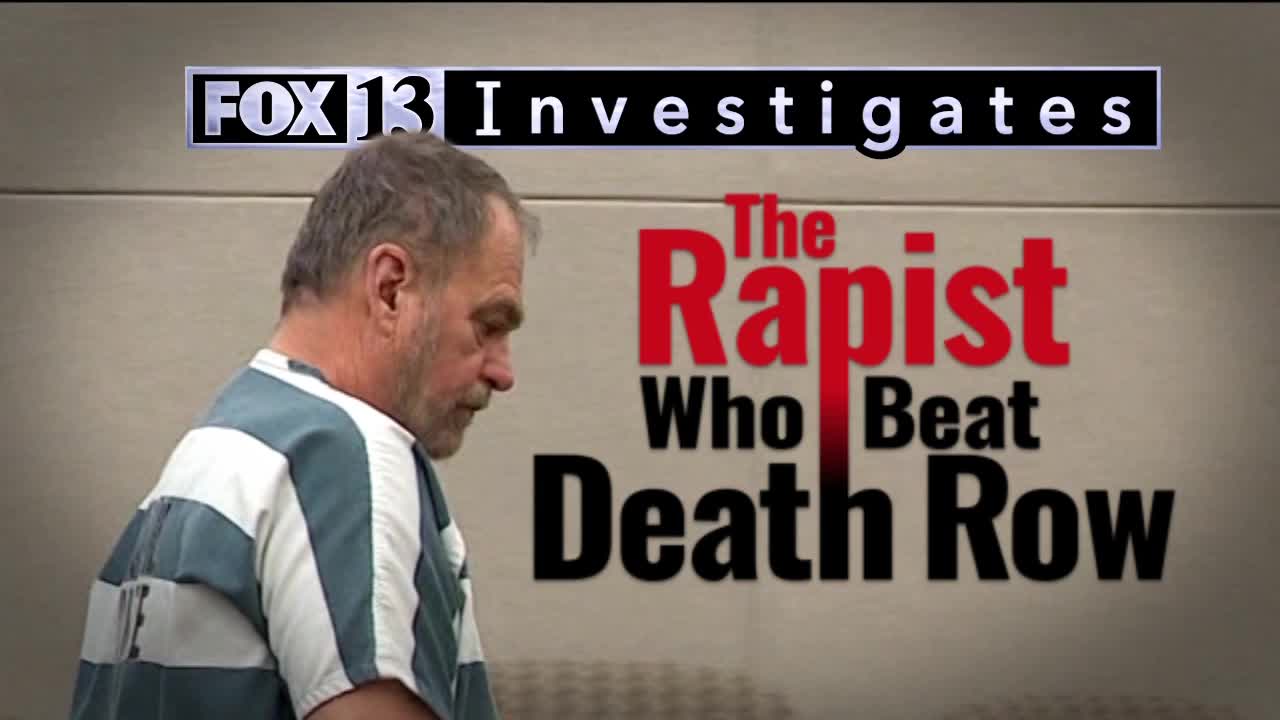 SALT LAKE CITY —
A FOX 13 investigation has revealed new information about a cold case suspect who police are calling the “Clearfield Rapist.”

Mark Douglas Burns, 69, was supposed to die more than 45 years ago in a North Carolina gas chamber due to a rape conviction in 1974.

Eventually, a judge vacated the death sentence for reasons that are still unclear.

Burns was released and came home to Utah. He is now confessing to multiple rapes and homicides across Utah, Wyoming, Arizona, and Oregon.

His first and only interview was with FOX 13’s Adam Herbets at the Davis County Jail in Farmington.

Protocols at the jail prevent visitors from recording inmates, but FOX 13 is currently in the process of requesting video of the interview recorded by the Davis County Jail.

Body camera video released by the Clearfield Police Department shows Burns acting confused as officers detain him and transport him to the station.

“What is this about?” Burns said. “You’re going to handcuff me?!”

The known victims at the time ranged in age from 11 years old to 52 years old in the following cities.

In at least one case, police said Burns forced family members of his victims to watch the sexual assaults take place.

He pleaded “not guilty,” but said he is now in the process of changing his plea.

“I want to give my victims some closure,” Burns said. “There’s not a lot I can offer them… They did nothing to me. They didn’t deserve that.”

He said it was not his goal to be caught, but he now feels a sense of relief.

“I’ve had a great weight off of me,” Burns said.

Burns said he chose to also confess to three cold case homicides, partly because he wants to receive the death penalty.

One of the cases being linked to Burns is the 2001 killing of a 28-year-old woman named Sue Ellen Gunderson Higgins in Evanston, Wyoming. Her husband was arrested in New Mexico, but charges were eventually dropped as law enforcement realized he was wrongfully accused.

Burns said he killed Higgins because he panicked. He did not reveal additional information.

“It was a total mistake,” Burns said. “Totally my bad.”

The two other confessed homicide cases are in Oregon and Arizona. FOX 13 is not revealing specifics about these cases in order to protect the integrity of ongoing investigations.

Burns said he has given the FBI enough information to prove his confessions are not false.

“My brain does not function properly,” Burns said. “I am a sexual deviant. I am a predator… I had a compulsion that was irresistible. It was unsatisfiable… I never admitted it to anyone.”

Burns said the three homicides were not sexually motivated. He insisted the last time he committed a crime was in 2002 as “more normal feelings started to evolve.”

“(At first) I kind of missed it, the excitement. The adrenaline rush,” Burns said. “I think I’m starting to feel what guilt is like.”

Burns said he is willing to confess to every crime he has committed, but is not yet ready to reveal the total number of rapes he was involved in.

“I remember probably almost every detail about this case because some cases sit with you in your heart. Some in your mind. This one was both,” said Lynnette Griffith, a now retired commander of the Rock Springs Police Department. “I do carry some burdens, and that’s one of them. My victim was 14… I always felt it was somebody just driving down the Interstate because this home was right off the Interstate.”

Ken Smoot, the owner of Smoot Brothers Transportation in Brigham City, said he hired Burns as a truck driver in the 1990s or early 2000s. He said he did not know Burns was a convicted rapist in North Carolina because criminal background checks were not prevalent at the time.

“You know, you put a guy in a truck and send him across the country, so you don’t spend a lot of time with him,” Smoot said. “Do I feel bad for Mark? No. Do I feel bad for the victims? Yeah, absolutely.”

Smoot said Burns did not work for the company long, instead choosing to work for another trucking company in Brigham City.

“He didn’t care for (our) routes,” Smoot recalled. “He seemed to want to go up the northwest, and our neighbor up the road is the one that runs those routes.”

“Did he say why he liked those routes?” reporter Adam Herbets asked.

“No, he never did,” Smoot said. “He wanted to go that direction. That’s where he wanted to travel.”

“Is that concerning to you, now that you know what he’s accused of?” Herbets asked.

“All of it’s concerning now,” Smoot said. “I guess to realize what he was capable of… the monster inside had to come out.”

Burns said none of his rapes took place on his route as a long-haul truck driver.

After watching FOX 13's initial story, Burns said he was frustrated to hear Smoot's recollection of the events were "completely inaccurate."

Burns stated he was terminated for making a mistake on the job that cost the company money. He said his motivation for seeking employment at his new company had nothing to do with routes in the northwest. He stated he did not start working for his new company until 2006, years after working for Smoot Brothers Transportation.

Smoot later said his memory of the events are foggy.

"Clearly he remembers the events differently," Smoot said. "He could be right. It was a long time ago."

FOX 13 was able to obtain microfilm archived documents from the 1970s in North Carolina as part of this investigation to determine why Burns was removed from death row.

Police arrested Burns on January 17, 1974 for a rape he committed inside of a McDonalds bathroom on January 10, 1974 in Jacksonville, North Carolina.

Burns was 23 years old at the time, serving as a corporal with the United States Marine Corps at Camp Lejeune.

Prosecutors stated Burns folded a small piece of paper to jam the lock of a private McDonalds restroom. Burns then waited for someone to walk in. He eventually followed an 18-year-old woman into the bathroom as she struggled to lock the bathroom door. He raped her at knifepoint while the victim’s husband ate in the dining room.

FOX 13 is not releasing the name of the victim.

His judgment and sentence of death was signed on March 1, 1974.

“Mark D. Burns (is) to inhale lethal gas of sufficient quantity to cause death, and the administration of said lethal gas must be continued until the said Mark D. Burns is dead. AND MAY GOD HAVE MERCY ON HIS SOUL.”

Burns was set to die on May 3, 1974. His defense attorney William Cameron filed multiple appeals which were denied.

Regardless of one’s opinion of the death penalty, it was the required sentence for most convicted rapists in North Carolina at the time.

In 1975, North Carolina lawmakers passed a new bill that would vacate some death sentences for rapists who committed their crime after April 8, 1974.

Although Burns case was in January, 1974, the judge seemed to make an exception, re-sentencing Burns to 25-30 years.

The documents do not state why the judge ignored the guidelines of a new law that should have still kept Mark Burns on death row.

Burns said he believes the judge may have gone along with a deal stuck between prosecutors and his defense attorney.

Attorneys and judges who were involved in the case 45 years ago are now dead.

Documents state prosecuting attorneys “made diligent efforts” to reach the 18-year-old victim, but she did not attend court on the day Burns’ sentence was vacated.

Attorney Mac Cameron, the son of Burns' defense attorney William Cameron, said he had no recollection of his late father's case but agreed to help out.

"I looked over the documents," Mac Cameron wrote in an email to FOX 13. "There is not much contained in the documents to really explain what was going on, so we are mostly speculating at this point. It is unclear what the real, specific motive is for the action. It is apparent that all this was done at the trial court level, as opposed to an appeal having been taken on the issue and an appellate court making a ruling. It is also apparent that the order was entered by consent, which usually means that the State/DA and the defense/defendant agree on what should happen, and that the trial court judge doesn't object to it... That's about all I can make of it."

The Onslow County District Attorney’s Office has not responded to FOX 13’s requests for comment in 2019 or 2020.

FOX 13 has also tried and failed to make contact with the victim, who would now be approximately 63 years old.

Burns told FOX 13 he spent significantly fewer than his sentenced 25-30 years in prison even though he was “not a model prisoner” who got into fights and was caught with marijuana.

“I have always believed in (the death penalty). Something that’s that heinous of a crime?” Smoot said. “If somebody has committed those kinds of crimes, I’m — I’ve always been in favor of capital punishment.”

”I’m not the biggest fan of it, but I do think there are some cases that people might be irredeemable and I don’t know what else to do,” Griffith said. “If I was a parent, especially of one of the children who was raped by him, I might feel a lot differently because then your mother bear comes out and get out of the way.”

Rape is no longer a crime that is subject to the penalty of death in the United States.

Burns has not yet been formally charged in any state for homicide.

“In today’s world you have a lot of history, and he didn’t change. He didn’t take advantage of his second or third chances, however many he had,” Griffith said. “There might be people who would want (the death penalty) when we find out the totality of what this person has done in his life.”

A previous version of this story included statements from Burns' former employer who mentioned Burns quit his job at Smoot Brothers Transportation to work for another company. The story has been updated to include a rebuttal from Burns, stating the former employer's version of events is inaccurate.

Other than the testimony from his former employer, Burns stated FOX 13's reporting "was pretty darn accurate."