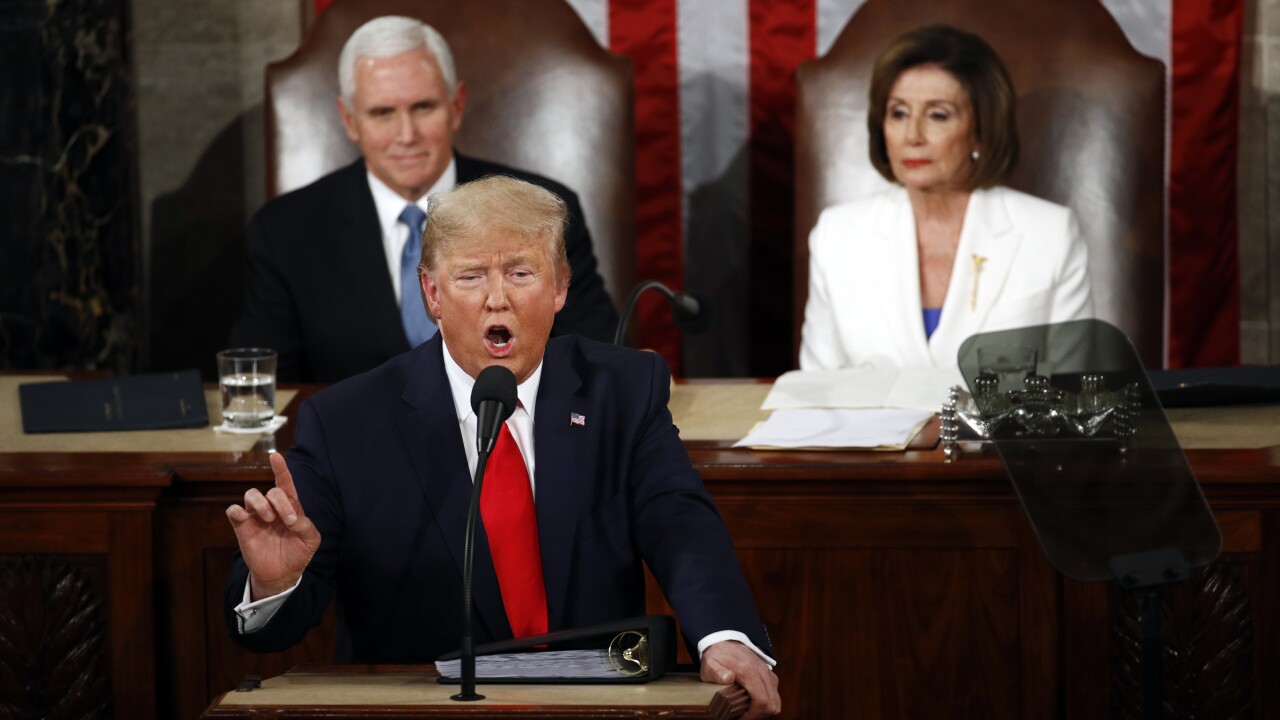 President Donald Trump focused largely on the U.S. economy in his fourth State of the Union address Tuesday night.

Utah's national congressional delegation echoed these themes in their statements released in response to the address.

I appreciated welcoming Governor Herbert to the Capitol and spending time with him ahead of the State of the Union address. Under his leadership, Utah continues to see economic prosperity, job growth, and our unemployment rate is at a record low.

Our nation has experienced similarly strong economic growth, with rising wages, more job creation, and low unemployment for the past few years. The President rightfully recognized that success and also highlighted several policy areas in which both parties should work together. Going forward, I am urging Congress and the President to urgently address our nation’s runaway debt, which threatens our retirement programs like Social Security and Medicare. The TRUST Act, which I’ve introduced with a bipartisan group of senators, would rescue our government trust funds and address our debt crisis, and passing this legislation is my top priority this year.

Rep. Ben McAdams touched on the economy and bipartisanship:

I listened to the President’s speech in the company of the Problem-Solvers Caucus. Members of this group of 24 Republicans and 24 Democrats sat together, not separated by the aisle in the House chamber that normally divides the parties during debates. We work to build consensus and pass bipartisan legislation that moves our country forward.

I’ve learned from my time in public service that you don’t have to agree on every issue in order to find common ground and achieve progress. With a strong economy and more Americans employed, now is the time for us to work together to get our fiscal house in order, strengthen Social Security and Medicare and invest in modernizing infrastructure. I’m eager to work with my colleagues and the President to pass bipartisan legislation to dramatically lower prescription drug prices.

America is thriving. We have so much to be thankful for.

Our military is more powerful than ever, and our service men and women, and their families, are getting the support they deserve. We continue to remain strong in defending the United States against terrorism and outside threats.

Our economy is the strongest it’s been in my lifetime—improving the lives of Americans of every background. The unemployment rate is at a 50-year low, with Utah’s unemployment rate reaching a record-breaking low. The President is committed to improving the lives of working families—including lowering the cost of healthcare, paid family leave, and expanding access to affordable childcare.

The powerful state of the union should inspire us all to work together to build on our successes and continue to improve Americans’ quality of life.

I am thankful that even during partisan times, the American economy is strong, with record low unemployment rates and higher than average wages — including in Utah. Further, our future is optimistic thanks to bipartisan victories such as the passage of the USMCA.

I am encouraged to hear the President prioritize bipartisan approaches to address our healthcare and infrastructure needs and I look forward to working with both the Administration and my colleagues in Congress to deliver meaningful changes for Utah’s Third District.

Rep. Rob Bishop was full of praise for the state of the nation's economy:

We are in the midst of an incredible time in America's history. By almost any metric, Americans today are faring better than they were before 2016. We are safer and we are stronger, and I commend President Trump and his administration for creating an environment in which Americans can succeed. In Utah, nearly 150,000 jobs have been created since 2016, business is booming, and wages are increasing. Most importantly, our defense is strong and getting stronger thanks to President Trump’s leadership and bipartisan cooperation. I remain optimistic that our best days are ahead of us.

Sen. Mike Lee did not send a statement to FOX 13.