Utah could slip back to 'orange' 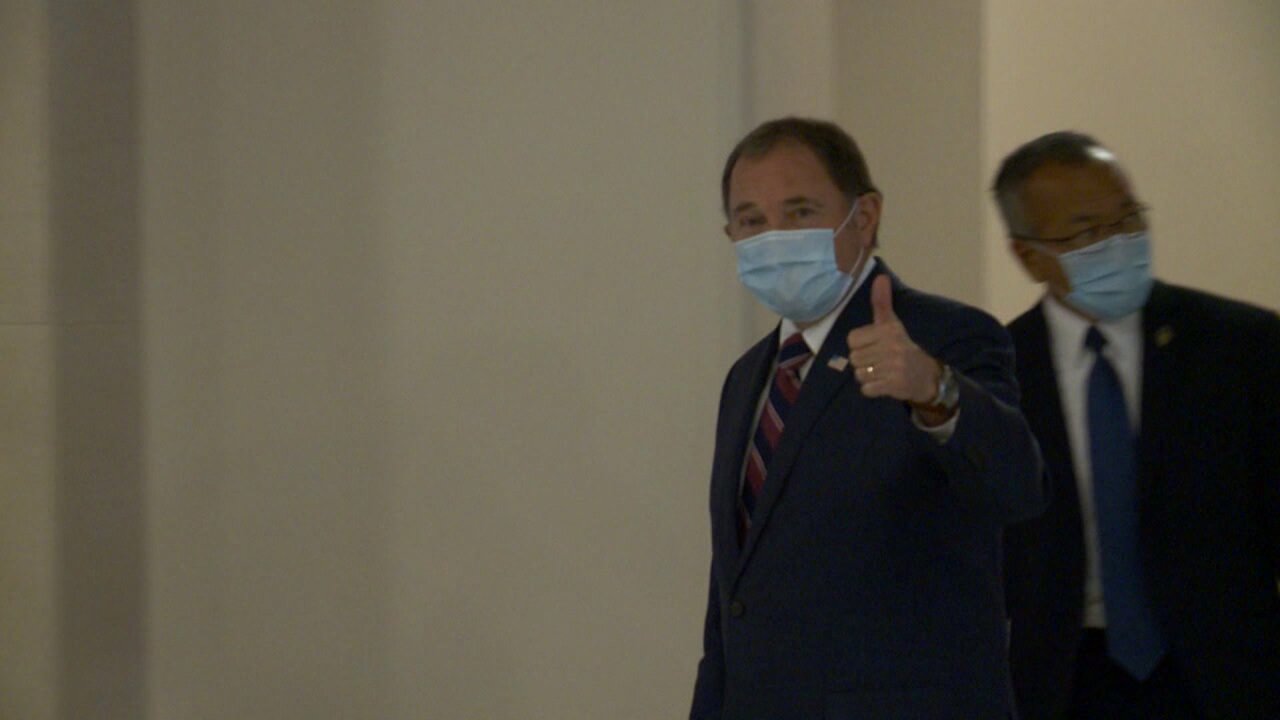 SALT LAKE CITY — Governor Gary Herbert indicated he would grant a request to allow Salt Lake County to mandate the wearing of face coverings in public.

At a news conference Wednesday, the governor said he believes in "local control." He said he and others in the COVID-19 unified command would review Mayor Jenny Wilson's request and if the data backs it up "we will grant their request to make it a mandatory requirement to wear a face mask in Salt Lake County."

Mayor Wilson's request was backed by leaders in Salt Lake City, Alta, Emigration Township, Magna, Cottonwood Heights, Holladay and West Jordan. Summit County confirmed to FOX 13 it was considering its own request, but had not decided whether or not to seek it.

He did mandate the use of face coverings in all state-run facilities, including liquor stores and on college and university campuses.

Asked by FOX 13 why he wouldn't mandate it for the public statewide, the governor reiterated his belief in local government having a say in what's best for their people. Still, he wouldn't rule it out if things didn't improve.

"We’ll see what happens down the road. There may be other ways, we’ll see if other government leaders and health departments want to make adjustments. We’ll see," he said.

Under a law recently passed by the legislature, local authorities cannot have measures stricter than the state unless they get special dispensation from the governor.

Gov. Herbert's announcement came during a lengthy address to the people of Utah, where the governor addressed the rising surge of COVID-19 cases. Earlier this week, a memo by state epidemiologist Dr. Angela Dunn that was shared with FOX 13 sparked alarm when she warned that with rising cases and hospital capacity potentially being overwhelmed Utah faced a "complete shutdown." The memo said if cases did not decline, Utah could move to "orange" on the color-coded risk scale. She also recommended mandating face coverings either by government or business.

Dr. Dunn spoke about it on Thursday noting that she intended the memo as a point of discussion, and she was not advocating for shutting down the state. She pointed out she was one of many voices the governor listens to for advice on handling the pandemic.

"I’m really proud to work in a state where I feel encouraged to provide my input and advice and that leadership will consider it," Dr. Dunn told reporters.

In his own remarks, Gov. Herbert gave Dr. Dunn a vote of confidence.

"We appreciate the good work she’s doing, has done, and will continue to do," he said.

The governor said he would pause any requests from counties to move to a lower-risk level for COVID-19. Currently, 10 counties are at a "green" or "new normal" with the lowest level of requirements for businesses and the public. Most of Utah is at a "yellow" or "low" level and only Salt Lake City is "orange" or "moderate." Each of those carries with it a number of health directives that include social distancing, hand hygiene and sanitization and face coverings.

Asked by FOX 13 if it was still possible the entire state moved back to an "orange" risk level, the governor did not rule it out if things didn't improve.

"We can dial it back. That certainly is on the table. We hope that doesn’t happen. The next two weeks will be critical," he said.

Gov. Herbert proclaimed himself a big advocate for wearing face coverings and urged Utahns to wear them not only to protect themselves, but to protect their neighbors. He acknowledged many Utahns feel they've gotten mixed messages but said it is a good thing to do to help those most vulnerable and slow the spread of COVID-19. He promised more outreach to higher risk communities, including a special news conference Thursday in Spanish to reach the Latino community which has been disproportionately impacted by the virus.

In a surprising announcement, the governor disclosed a senior staffer in his office had recently tested positive for novel coronavirus. That staffer, whom the governor's office would not name, was self-isolating. Many staffers in his office were now working remotely. Neither Gov. Herbert nor Lt. Governor Spencer Cox were in close proximity. (The governor has also tested negative repeatedly for COVID-19 antibodies.)