Gov. Herbert will not mandate face coverings across Utah, but schools will have to 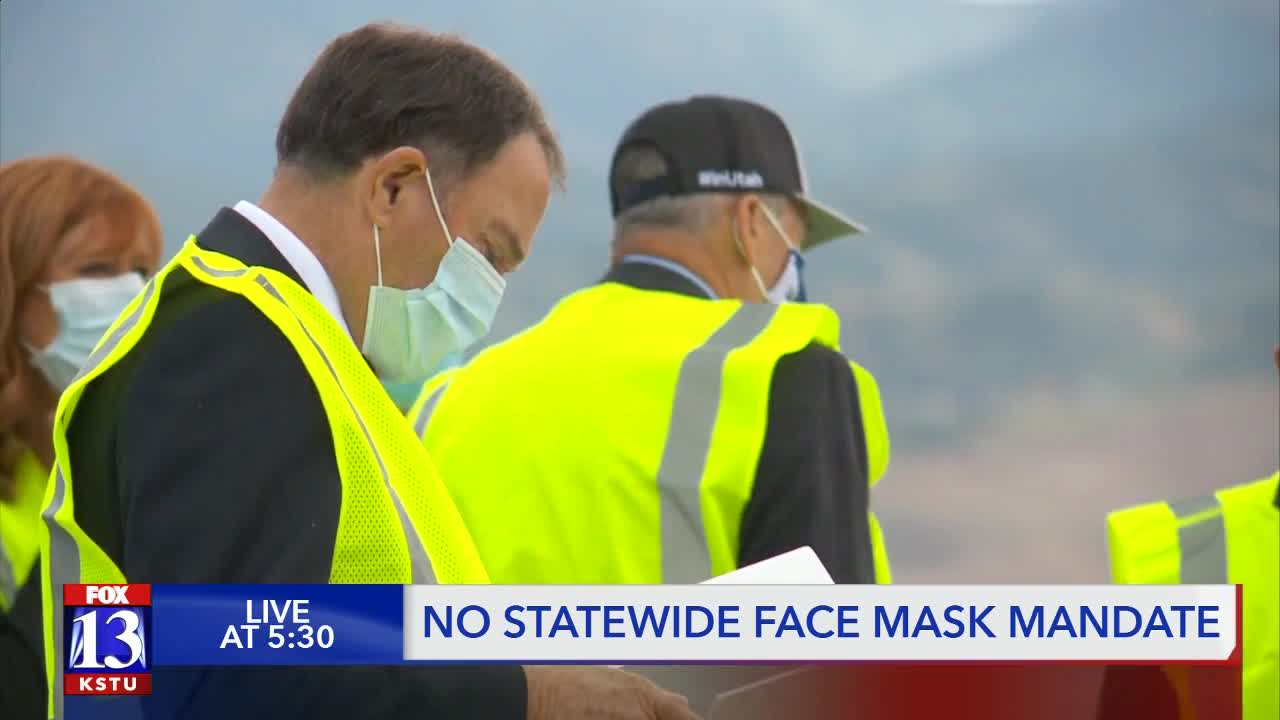 SALT LAKE CITY — Governor Gary Herbert will not mandate face coverings statewide, but all K-12 schools will have to.

He made the announcement at a news conference Thursday where he challenged Utahns to adopt face coverings more. The governor warned that if cases continued to climb, a mandate was still on the table.

"It's not that inconvenient but it can save you from getting sick, others getting sick," he said. "And it's going to save some people's lives."

The governor challenged Utahns to do their part to get infection rates to drop below 500 by August 1. On Thursday, the state reported 601 new positive cases and four new deaths, bringing the total to 205 killed since the beginning of the pandemic in mid-March.

Asked by FOX 13 what his metric was before mandates would be imposed, the governor suggested 800. He also warned people that COVID-19 restrictions could tighten again. The governor conceded that many Utahns misunderstood the color-coded risk scale that the state put out, believing that as the state moved to "yellow" and "green" that health restrictions were loosened -- when in many instances they were increased. Gov. Herbert repeatedly emphasized a balance of "lives and livelihoods."

State epidemiologist Dr. Angela Dunn told reporters there were some positive indications in longer-term trends, but she urged physicial distancing and face coverings to keep COVID-19 from spreading.

"We all need to do our part to control the spread of COVID-19 in Utah," she said.

Throughout his news conference on Thursday, the governor repeatedly implored Utahns to practice social distancing and to wear a face covering.

The Utah State School Board referred questions about the decision to mandate face coverings for faculty, staff, students and visitors to K-12 schools to the governor's office. Recently, local school boards have been adopting plans to re-open starting next month with face coverings "optional." Now, it will be mandatory in Utah.

The move was applauded by the Utah Education Association, the state's largest teacher's union.

"Teachers are rightly concerned about returning to school this fall unless the school districts are prepared and taking proper precautions to protect students and staff," said UEA President Heidi Matthews in a statement. "Today’s proclamation by Gov. Herbert requiring masks in public schools is a welcome step in the right direction."

The decision follows meetings that FOX 13 reported on earlier this week with House Speaker Brad Wilson and Senate President J. Stuart Adams where the governor floated the idea of a face mask mandate statewide. In separate statements on Tuesday night, the two most powerful men in the Utah State Legislature came out in opposition to a statewide mandate.

"I do think the governor shares the thinking I have and the President has, that we want to appeal to the better nature of all Utahns to take care of their friends, and their neighbors, and their loved ones and our economy and the best way to do that is wear masks," Speaker Wilson, R-Kaysville, said in an interview Thursday with FOX 13.

Speaker Wilson said he believes masks are effective but disagreed that a statewide mandate was necessary. He said businesses were certainly within their rights to mandate them.

"We’ve just got to be really careful on what we rely on government to do to tell us how to live our lives and I don’t think it’s necessary at this point. I believe Utahns will do the right thing for the right reasons," he told FOX 13.

Pressed about other things the state mandates, Speaker Wilson replied: "We do, and some things I’m not super fond of. I think this is one of those things we’re going to get better, long term results if people do things for the right reasons."

The statements came the same day that Utah broke its record for COVID-19 cases, reporting 722 new cases in a single day. Utah has seen a rise in cases since restrictions started being loosened around the Memorial Day holiday. Recently, the governor paused any further loosening of restrictions.

"I think in an environment with rising cases, it’s a little difficult to assume we’re going green unless we get some new information or we add some elements to green that help us manage the pandemic in a different way," he said. "I believe we’re going to be best off as a state if we educate the public, let them make their own decisions about managing the pandemic but we all take this very seriously, including wearing masks."

Asked if there was a possibility Utah tightens restrictions again as cases rise, the Speaker replied: "There’s a chance, yeah."

While the governor has resisted a statewide mandate, he has constantly encouraged the use of face masks and allowed local governments to implement their own mandates. Under a law passed by the legislature in special session, local governments cannot be more restrictive than the state -- unless they get permission from the governor.

So far, Salt Lake, Summit and Grand counties have been approved to implement mandates. So has the town of Springdale, outside Zion National Park. The governor has also mandated face coverings in any state-run facility including the Capitol, liquor stores and driver license offices.

Health officials have argued face coverings are an effective way to slow transmission of COVID-19. But they have become a politically divisive topic. As talk of a mandate began last week, a rural Utah county commissioner compared Gov. Herbert to a Nazi for even suggesting it.

Salt Lake County is anxiously awaiting data to show the effectiveness of its mandate, but case counts posted earlier this week show a slight decline in COVID-19. Mayor Jenny Wilson has extended her health order until Aug. 20.