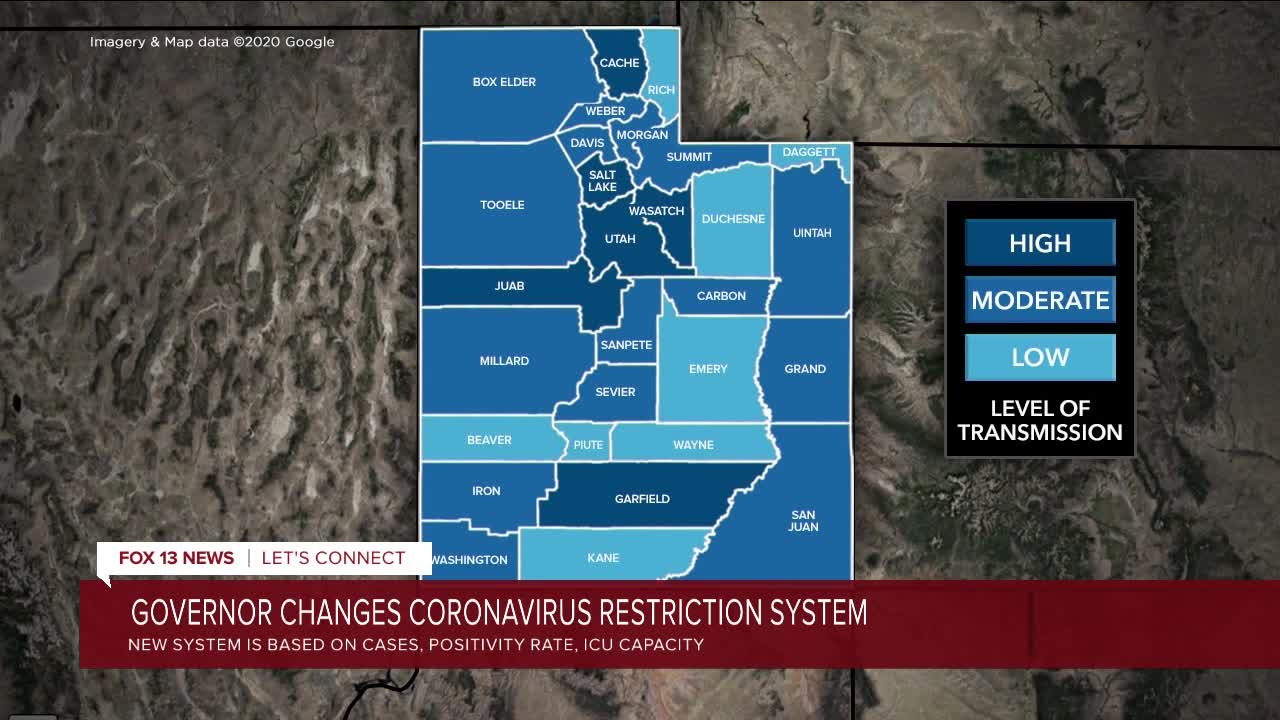 Governor Gary Herbert announced major changes to the state's COVID-19 response on Tuesday as cases continue to surge in the Beehive State. 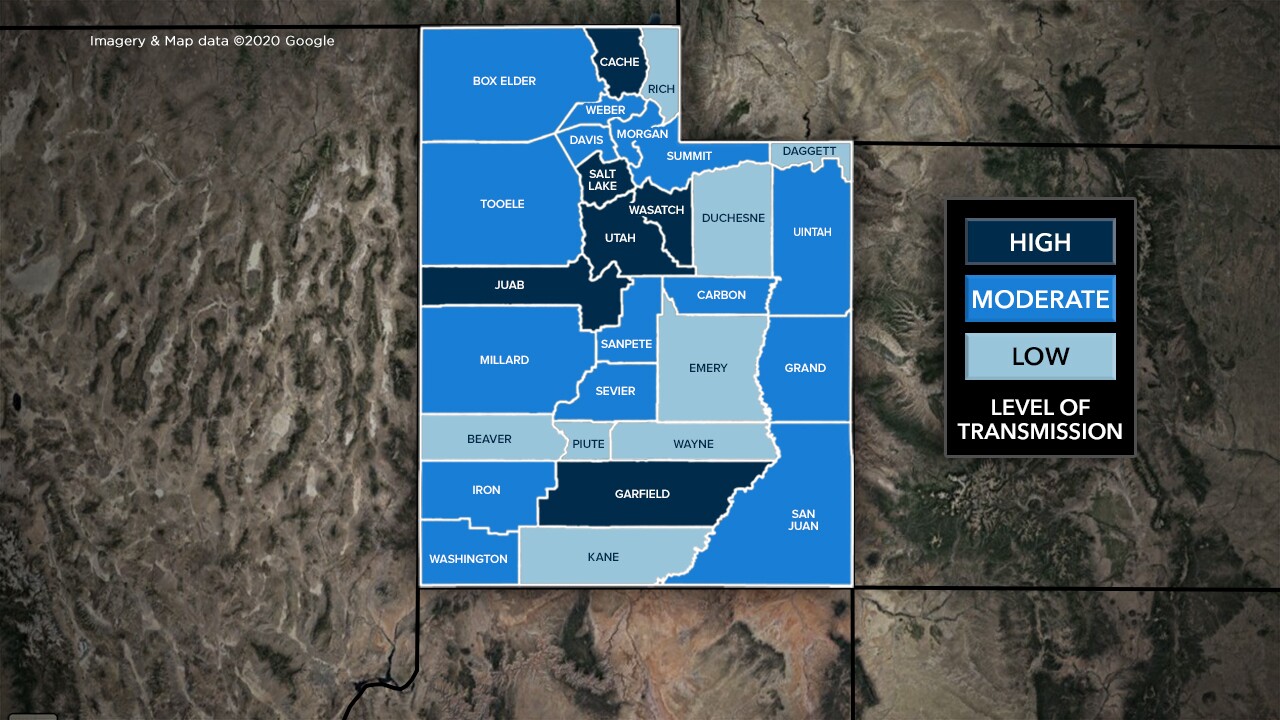 Utah is dropping its color-coded restriction scale for a transmission risk index, which ranks each of the state's counties in "high," "moderate" or "low" levels. Each one of those carries with it different levels of restrictions for businesses and people.

"We’re having one of the worst outbreaks in the country. This is unacceptable," Gov. Herbert said at a news conference Tuesday. "You and your families deserve good health and the best efforts of the government to help you to go back to normal activities as soon as is possible."

Saying it is "time for a new game plan," the governor announced the risk levels would be based on health department data and not politics. The formula for what level a county is in is based on a combination of case rates, percent positive rates and statewide ICU hospitalization.

Here's where Utah's 29 counties are:

The move is meant to target the biggest spreaders of COVID-19 right now.

"I would tell you this is a very large problem in our state," said Rich Saunders, the interim director of Utah's Department of Health. "Casual social gathering refers to the wonderful and important gathering of families and friends. This includes hanging out with groups of your high school or college friends. Basically groups that don't have establishment or organizational oversight. These are different from public gatherings, which include venues such as movie theatres, performing venues, concerts, weddings, sporting events and religious services."

Public gatherings can still happen so long as they can guarantee physical distancing (staying 6-feet from others) and other health guidelines are followed. Schools are not affected by these changes. The state continues to follow existing guidelines.

Utah's Department of Health will oversee the risk level and restrictions for each county.

"It’s going to be updated every Thursday and it’s going to reflect which counties are at which level along with the data to support why each decision was made," said Dr. Angela Dunn, the state epidemiologist.

The governor said data will determine when a county moves to a lower level, based on a 14-day pattern (increased restrictions can happen much faster). They will handle it by public health order, which operates under a whole set of laws that are different than the ones Gov. Herbert uses to issue executive orders.

Removed from that is any legislative input. It's something House Speaker Brad Wilson indicated he was fine with.

"The new Transmission Index is data-driven and sets statewide standards while empowering local elected and health officials to tailor restrictions to address local needs. Most importantly, this places responsibility for our state’s response with each of us individually," Speaker Wilson, R-Kaysville, said in a statement. "By showing where we are and what it will take for restrictions to be relaxed, we should all be eager to do our part as individuals, families, and businesses to drive our case rate as low as possible."

FOX 13 was the first to report Gov. Herbert was making changes after meeting with Utah's Department of Health, legislative leaders and others to address the recent spike in novel coronavirus cases. The move comes as Utah has recorded around 1,000 new cases of COVID-19 each day for the past couple of weeks. Hospitalizations and deaths are also climbing.

Much of Utah has been in a "yellow" or low restriction level for COVID-19 on the state's color-coded scale. Some rural parts of the state are in "green" or low risk. Provo and Orem were moved to an "orange" or moderate restriction level.

The state's color-coded system has faced criticism since its inception. Even the governor acknowledged in an interview with FOX 13 in August that people mistakenly believed the change in color was tied to a lower risk level. Saunders described the change as a "circuit breaker" for the surge in COVID-19 in Utah.

Asked if his "requirement" that masks be worn in public is really another word for a mandate, Gov. Herbert did not dispute it.

"You can describe it how you want," he said. "I think we have mask mandates but we’re also asking people to do the right thing for the right reasons. It’s a combination maybe."

Questions remain about whether or not any of the restrictions will be enforced. Gov. Herbert insisted they were not targeting people now, but expecting they would comply with COVID-19 health guidelines.

"I don’t expect there’s going to be a lot of police out looking for violators. It’s a matter of it’s an ordinance, it’s an order from our Utah health department to help us all be safe, keep our economy going. There’s nothing bad about this, it’s a good thing," he said.

Even political leaders who have been critical of the governor in the past have praised the move.

"Salt Lake County is pleased the state is taking a data-based approach to better protect our communities. The three-level index based on clear and objective criteria is a positive step, and we support the more stringent interventions statewide, such as face coverings, social distancing, and limitations on gathering sizes," Mayor Jenny Wilson said in a statement.

Salt Lake City Mayor Erin Mendenhall, who recently met with the governor to press for moving her community to an "orange" restriction level, praised him.

"I commend [Governor Herbert] for the bold measures he’s enacting today to break the spike of cases our state is experiencing as well as the broader shift of COVID restrictions to more directly target the behaviors we know have the highest impact," she said in a post on Twitter. "The spike in our local and statewide data has been severe and a move like this is an important signal that our current situation is serious for public health and our economy. We all need to wear our masks more often than we have been, when with our friends and extended family and in all social and public gatherings."